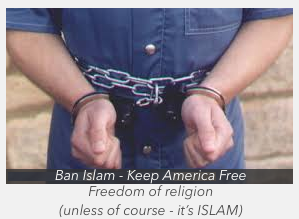 Who is really "SAFER" - With These New Policy Proposals?

Recent Attacks on American Muslims Include:

1.) From Brooklyn, NY - US Postal Worker Attacks Young Sister A Muslim sister who attends Masjid At Taqwa was harassed by some random Postal employee, In Uniform, by spitting on her as she was walking with her baby( in a stroller ) on Fulton St! He was also yelling at her & making credible threats!

Then the sister quickly went into a nearby store owned by immigrant Muslim brothers who summarily locked the postal employee out. The perpetrator ( an African American) continued yelling insults while banging on the store's window. Eventually, he left and the Sister was escorted to safety by complete strangers.

Fortunately, that store has a surveillance camera that caught everything( audio & Video). The police were notified.

The 6 o'clock News on Chan 7 yesterday , the incident was mentioned & a replay of what was video taped was shown. The postal employee was identified & later arrested according to the reporter . This incident has so been posted on Facebook.

2.) A sister in the UK was pushed in front of a moving commuter train recently! Also, a Moroccan sister says she walked by Baisley Park, when someone shouting: "Go back where you came from!"

NOTE TO SISTERS: We live in an insidious time of manufactured Islamophobia, we must be more informed, aware, vigilant & prepared to protect ourselves against racial, religious and ethnic discrimination.

All of us are in for some difficult times ahead. Let's all think, share & act responsibily - (before it's too late).