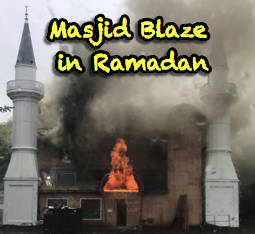 Mosque In Flames In Ramadan 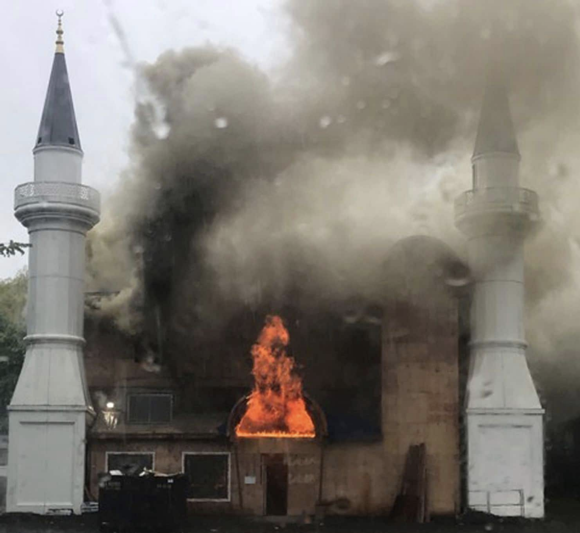 The FBI, Homeland Security and the state police in Connecticut are searching for arsonists who torched the Diyanet Masjid in New Haven, Sunday. The Blaze destroyed the whole front of the building.

No Deaths or Injuries

The lone Muslim who was there in the masjid on Sunday afternoon, when the fire was set, was not hurt.

Not The First Time

Haydar Elevli, masjid president, says the damage from the fire wasn’t severe and mainly impacted only parts of the mosque under renovation. He said, “We’re not gonna be fearful, but still, it hurts” he continued saying, “This is our second home.”

New Haven’s Mayor, Toni Harp said that evidence suggests Sunday’s fire at a “New Haven house of worship, a mosque, to be more specific, during the holy days of Ramadan, no less, was both intentional and incendiary in its nature” and if proven true, the city will do whatever it takes to, “bring in those responsible for the attack.”

“Incendiary evidence” found at the scene has authorities looking for the culprits who started this horrible crime. However, investigators are withholding statements about suspects or their motives.

Amid the fire and destruction, Muslims came out for Iftar and Salah after maghrib, only to be turned away.

As of Fajr on Wednesday morning, Muslims still had to wait for the all-clear to be announced and get permission to go inside for salat (congregational prayers) and worship durning the holy month of Ramadan.

Masjid Maintained by Many Turks and Other Muslims

Diyanet Mosque, built just nine years ago, has over 350 Turkish and other Muslims who gather for worship throughout the week. The nonprofit organization caters to Turkish immigrants and Muslims, and like most all mosques everywhere, welcomes non-Muslims to come out and share and learn more of their community.

Goal in Ramadan — Not Enough Now

The masjid included classrooms and apartments in addition to the areas of worship within the mosque. Due to the fire and related set-backs it is not known whether or not necessary funds needed to continue operation and repair of damages caused by the blaze will be raised.

Brother Elevli said he was heartfelt over donations that came in by other local religious leaders. As of this morning (Wednesday May 15), about $100,000 had been raised. Their goal was higher, but the month is not over yet, is it?

Just as Islam is increasing in numbers all around the world, so are the attacks on many houses of worship.

1) Last month, Muhammad Islamic Center of Greater Hartford — just 36 miles north of New Haven’s Diyanet Mosque — got a racist, violent threat to burn its building to the ground. A number of families pulled their kids out of weekend school after receiving threats.

2) A shooting attack killed one and injured three others at a synagogue in Poway, California.

3) Three churches were burned to the ground near St. Landry Parish in Louisiana and the deputy sheriff’s son there is facing hate crime charges for allegedly starting the fires.

4) Over 50 Muslims were shot to death and over 100 injured in Friday Jummah salah, just last month, when white terrorist shot up two masajid (plural of masjid), Christchurch, New Zealand.

Where does this leave us now? What does the future hold for innocent people who want to worship God and practice their faith? Why is this happening in a so-called “modern world”?

“Get Guided” with Our Muslim Voice