WARNING: If the following information is correct - All Muslims & non-Muslims living in US need to read and follow the "FOUR STEPS FOR MUSLIMS IN US - NOW" [at the end of this article]

Many Muslims are asking us - "What's next?" and "Where do we go from here?" also, "Can we still be Muslims in Trump's America?"

Our next few articles must deal with the politics and issues concerning the future of American Muslims, as well as relations with other countries, especially Muslim countries, their allies and foes.

Let us begin with the mentality of those who helped Mr. Trump win his election and what the driving force was behind their support. To achieve this goal we relied on research already done by Professor Brian Shaffner, department of political science at University of Massachusetts Amherst, and faculty associate at Harvard's Institute of Qantitative Social Science.

In the wake of Donald Trump’s victory over Hillary Clinton last week, many are still struggling to understand what happened. Explanations of Trump’s support have largely been driven by exit polls, which often identify "working-class whites" or "non-college-educated whites" as the significant swing group that help propel Trump to victory. But while the exit polls can help us identify which groups were crucial, they are much less helpful for understanding why these groups voted the way they did.

This is largely because exit polls fail to ask questions that measure the key concepts that may have been in play in this election. As a result, we are left with competing narratives, with some reports suggesting that economic insecurity was the decisive factor in this election, and others highlighting the role of racism or sexism in driving voters toward Trump.  The truth, however, is that there is no single cause of Trump’s success among whites. All three factors played an important role.

To demonstrate that this is the case, I draw on a nationally representative survey designed by Matthew MacWilliams, Tatishe Nteta, and myself and fielded by YouGov two weeks before the election (October 26 to 31 ). Fortunately, that survey includes the kinds of questions needed to measure the competing narratives about what drove the white vote.

To capture economic security, I use a question that asked individuals how satisfied they were with their own economic situation. For sexism, I used an item taken from a well-established battery of questions designed to measure the power by getting control over men."  And to capture racism, I use an item taken from a battery that measures the extent to which an individual acknowledges the existence of racism. This particular item asks respondents to indicate whether they agree or disagree that "[w]hite people in the US have certain advantages because of the color of their skin." 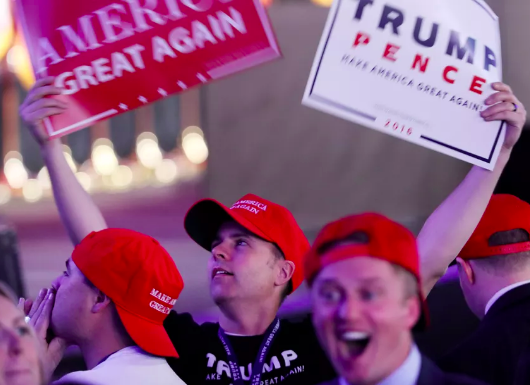 The first chart below shows how whites responded to these questions in our survey. Note that approximately one in four white Americans were "not at all satisfied" with their personal economic situation. Such economic dissatisfaction is presumed by many to be the chief explanation for the Trump vote. But there is also a significant percentage of white Americans who demonstrated a denial of racism on our survey – more than 40 percent disagree that white people have advantages in the US because of their skin color. About 40 percent of white Americans were also either in agreement or neutral in rating the statement that "women seek to gain power by getting control over men."

To get a sense of the relative importance of each of these factors in explaining the vote for Trump, I estimated a statistical model of these white respondents’ vote choices. In the model, I included standard demographic and political control variables, such as gender, age, education, income, ideology, and party identification. I then added all three questions described above into the model at the same time. This allows us to see, for example, whether views about racism are still important when one accounts for a respondent’s reported levels of economic dissatisfaction.

To show the comparative importance of each of these three measures, I plot the relationships between the items and predicted support for Trump in the graph below. These graphs show how changing an average white respondent’s answer on each of these questions would affect his probability of voting for Trump rather than Clinton.

It is clear from this graph that there is no simple single explanation for why whites supported Trump over Clinton. Indeed, each of these three explanations appears to be important in explaining the vote. Dissatisfaction with one’s own economic situation leads to a sizable increase in the probability of supporting Trump, but so too does increasing levels of denial that racism exists in America. 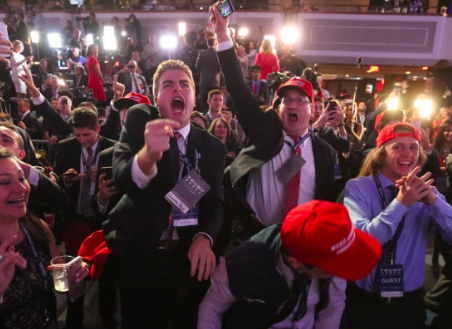 Sexism is also a powerful force, as those who are more in agreement that women seek to gain control over men were far more likely to support Trump. Notably, the impact of sexism appears to be unique to the 2016 election, as I have shown in an analysis of other polling data.

Ultimately, the competing narratives about why Trump performed so well among whites are not competing at all; they are complementary. To truly understand Trump’s success means acknowledging that economic insecurity was part of the story, but so too were racism and sexism. And in truth, it likely took all three factors to allow him to edge past Clinton for a narrow victory.

Brian Schaffner is a professor in the department of political science at University of Massachusetts Amherst, he is also a faculty associate at the Institute of Qantitative Social Science at Harvard. Professor Schaffner's research focuses on public opinion, campaigns and elections, politcal parties and legislative politics. He is the author of "Politics, Parties and Elecctions in America (7th edition).
He has also co-authored the book "Campaign Finance and Political Polarization: When Purists Prevail, co-editor of the book "Winning with Words: The Origins & Impact of Political Framing", co-author of "Understanding Political Science Research Methods: The Challenge of Inference". His research has appeared in more than 30 journal articles and has received more than $2,000,000 in external funding.
Professor Schaffner is also the founding director of the UMass Poll and a co-PI for the Cooperative Congressional Election Study.

Answer: FIRST, PRAY TO GOD. Our sincere prayers to the Creator of the universe will make a difference in the lives of all us, leaders and followers alike. Remind others to: "Worship the Creator - Not the Creation"