See What They Draw Now? 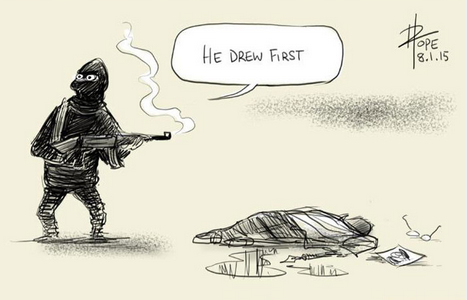 What Will They Say Now?

This is what people are saying (and thinking)

A non-Muslim speaks out AGAINST Calling Terrorists - Muslims! (hmm)

Howard Dean—about what happened yesterday in Paris - he says 'I refuse to call these shooters in this and similar cases "Muslim terrorists."
According to Dean, the disregard for the lives of others that these terrorists display "is not what the Koran says."

You know, this is a chronic problem. I stopped calling these people Muslim terrorists. (They are about as Muslim as nobody) I mean, they have no respect for anybody else's life, that's not what the Koran says. Europe has an enormous radical problem. I think ISIS is a cult. Not an Islamic cult. I think it's a cult.

And I think you got to deal with these people. The interesting thing here, is we talked about guns the last time in regarding the United States, regarding how guns get in the hands of the kind of people that kill the two police officers here two weeks ago. France has tremendous gun control laws, and yet these people are able to get Kalashnikovs. So, this is really complicated stuff, and I think you have to treat these people as basically mass murderers. But I do not think we should accord them any particular religious respect, because I don't think, whatever they're claiming their motivation is, is clearly a twisted, cultish mind.

But Where is Our Voice?
The Voice of True Islam & Muslims?
Will you support our efforts to bring the truth of real Islam to the people of America?

Help us do our duty now: www.DonateToIslam.com

Is This A Message We Want?

One day after the shooting spree that left 12 cartoonists dead in Paris, France Newspaper office - other artists and cartoonists across the globe responded by drawing their own cartoons, showing their feelings.

We expect to see anger, grief and perhaps even revenge - But not all of them had the same feelings or attitude, at least not toward Islam and the 2 billion innocent Muslims who are directly affected by these horrific murders.

Take a look at these two images (drawn my fellow cartoonists) and leave your comments please: 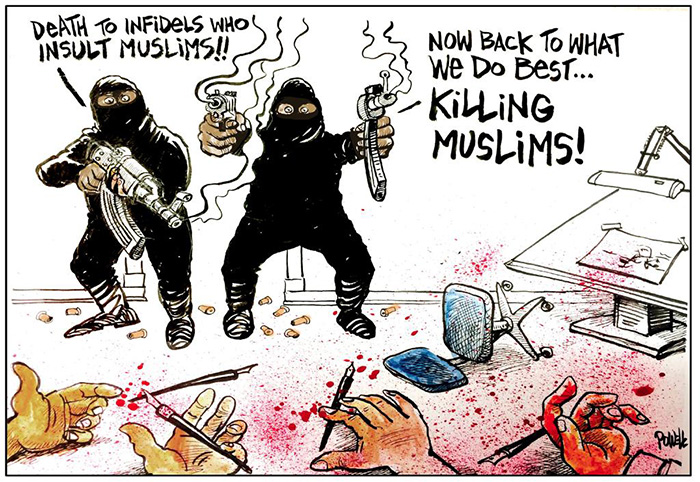 What does this picture mean to you?
[comment on this image #1 - below] 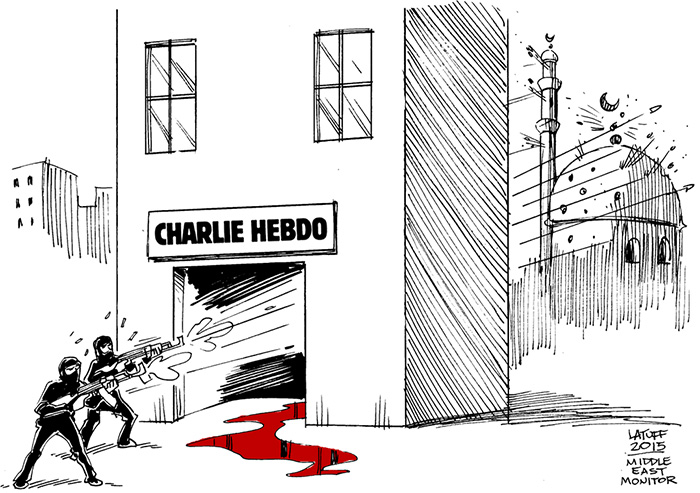 What does this picture mean to you??
[comment about this image #2 - below] 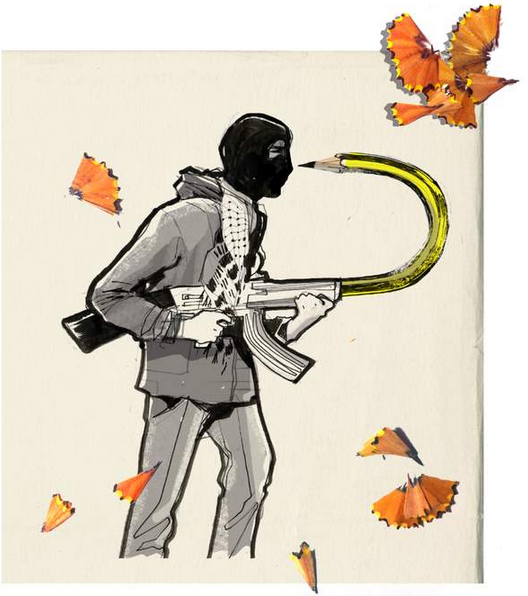 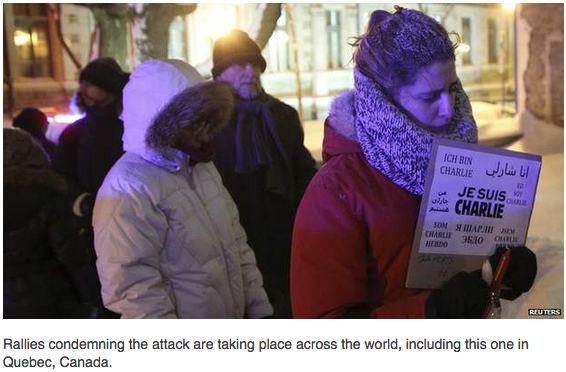 Do We Need Our Voice in America?

One of our readers said this about the events of January 7 in Paris, "It's interesting, some are calling the comic illustrators who died yesterday as 'martyrs', while those who commited these crimes will consider themselves as 'martyrs' when they are caught and brought to justice." [a reader in U.S.A.]

But Where is Our Voice?
The Voice of True Islam & Muslims?

Will you support our efforts to bring the truth of real Islam to the people of America?
Help us do our duty now:

123
#22 Hussain 2015-01-12 14:32
Cartoon 2 - shows a brutal killing of cartoonists but it also shows terrorism in the name of Islam ultimately harms the mosque; the bullets ricochet and are destroying the mosque. Symbolically destroying Islam. Satire should spark discussion and debate. These images should make us think, and I am glad you asked us to comment. I think we need to actually take stock of what is going in in the world and what is happening to Islam from 'within'. Who is funding these groups? Any ideas? There is terrible enemy within and we need to fight this. Don't leave it to others to do this; true Islam is beautiful and peaceful, and tolerant. But we need to educate both those born into Islam and those who are just swallowing up what the media tells us. But I honestly question who are these people who say they are Muslims and kill in the name of Islam? It just doesn't add up.
#21 Yolanda 2015-01-11 11:44
Ignorance and anger are the most lethal weapons and with them we all lose. Satan, the Lier is the only winner here.
#20 Mubarak Khan 2015-01-11 11:14
The biggest problem and enemy of the islam is coming from within the islamic world.People with radical approach in muslims are badly in a need of true education and guidance from Allah and his holy book of koran. They are doing all this under the name of Allah and islam and this makes a common muslim feels ashamed and isulted too.We have to raise our true voices and pass the holy message of islam and peace to the world. We have to come out and pour the true knowledge of islam in the modern world.
#19 Muhammad J 2015-01-10 19:36
Insulting the prophet is not accepted at all according to any ideology even the free of speech has an end line with disrespecting other's belief but killing innocent people who did nothing related to that issue is not accepted too .. ((Fight in the way of Allah those who fight you but do not transgress. Indeed. Allah does not like transgressors.) ) Quran 2:190
#18 musefardad 2015-01-10 17:18
Well, I guess you people have a lot to learn in your own religion. Take a look at what happened in last few decades to Christianity. We all got problems.
#17 Qaiser Khan 2015-01-10 15:14
the first picture depicts playing games where cartoonist are killed by enemies of Islam portraying themselves to be Muslims & using the terror as a justification to kill the Muslims.

The second picture shows that the guns targeting the enemies of Islam are actually killing the Muslims.

The third picture shows how the guns & media is used to portray the inhumanity to be the monopoly of the Muslims.

The 4th picture shows how the media blind folds the common people & make them feel terrorized so they support the evil against the Muslims
#16 ANEES AHAMED 2015-01-10 05:40
Asalamualikum WRB,

I am really sad for those 2 brothers who did this, non-Muslims all over the universe started or join together to attack Muslims and blame ISLAM and this is the time we have to be very peace and patience asper our Prophet (Pbuh) said hope INSHA ALLAH will get support from ALLMIGHTY ALLAH at the earliest not to react like incident happened in Paris
#15 Khadija in uk 2015-01-09 05:58
In my opinion theses image do nothing but add fuel to the fire that's already burning. I am true Muslim and I am innocent and so are the rest of the Muslims.

We don't condemn killing innocent people regardless of their religious believe. This world is big enough for all of us to live in harmony. Having said that, let's not forget there is evil in this world and it will not stop corrupting the minds of the gullible people.

My advice to non-Muslims is please learn about Islam and you be the judge to decide if we are capable of doing these things that we are accused of. Don't believe everything you hear.
#14 Not in our name 2015-01-09 05:35
With no single doubt, Islam is the religion of peace and is teaching it's followers to respect other people's belief. Look, our beloved prophet have been named as crazy, devil,..ect. But yet after 23 years, he went back to Mecca with an army, not killing a man.
Also Quran has taught us about forgiving and having an open heart toward those who do us us wrong.

قال تعالى { وَسَارِعُوا إِلَى مَغْفِرَةٍ مِنْ رَبِّكُمْ وَجَنَّةٍ عَرْضُهَا السَّمَوَاتُ وَالْأَرْضُ أُعِدَّتْ لِلْمُتَّقِينَ (133) الَّذِينَ يُنْفِقُونَ فِي السَّرَّاءِ وَالضَّرَّاءِ وَالْكَاظِمِينَ الْغَيْظَ وَالْعَافِينَ عَنِ النَّاسِ وَاللَّهُ يُحِبُّ الْمُحْسِنِينَ (
134)
#13 Aisha 2015-01-08 22:01
Asalamu Alaykum,
I really think we as Muslims living in America have to get educated about the basics of our deen(way of life), and how Islam does not support what these few people are doing in the name of Islam. I mean, if these people say that what they did was an act of defending the honor and respect of our prophet Muhammad( peace be upon him), then really I think defending his honor and respect is to follow his way of life which is to live with others peacefully and to submit to Allah(God).
123
Refresh comments list
RSS feed for comments to this post