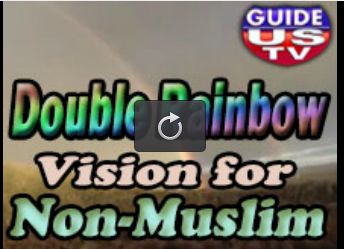 Man Cries Out to "GOD"
As He Sees a Double Rainbow

Listen close to this man crying & laughing - such enthusiasm and excitement - as he sees a double rainbow out in the open area (probably somewhere in Southwest U.S.)

He actually starts crying and has quite an experience just looking at the creation of Allah. If someone were to leave him a message - who knows?

Allahu 'Alim. He could come to Islam.

By the way - this video also influenced 38 million others (Yes, I said 38,000,000) It went VIRAL on YouTube because of his genuine enthusiasm and crying. Many people are still commenting on it today.

So what if we get people to check out this video on TUBE ISLAM where they can immediately view good things about Islam and Muslims and not be bothered by the thousands of videos attacking us?

Just make an email or post on the blogs something like this: "Man got so excited making a video of a 'Double Rainbow', he started crying and believing in the Creator (God).

38,000,000 (thirty eight million) viewed the original, because of the effect it has on non-Muslims when they see or hear genuine tears for God"

LET'S TAKE THIS VIRAL & SEE WHAT ALLAH DOES WITH OUR EFFORTS