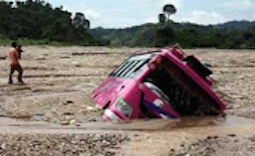 United Nations spokesperson says, "I agree with Anuradha Jamwal Bhasin, as she says, "Time to sink ideologies and prejudices and not allow them to prevail over humanity".

"Local victims stranded for days claim, 'Army helped tourists, but left us to be rescued by volunteers" - says report from Rueters September 13, 2014.

Over 250 people died as the largest flood in 100 years smashed through Kashmir
600,000+ more people stranded, billion dollars in damages - All in One Night.

Labeled the "Most Ferocious Floods in 100 years" - Two weeks passed, yet the crisis continues - Authorities are overwhelmed.

India is accused of blocking all direct aid, assistance or help of any kind into the area.

India tried to make it appear to the world the relief efforts and supplies coming in were all the work of Indian government.

One woman says, "it appears India is trying to accomplish a giant work all on their own, but truth is - politics of aid to Kashmir is at work. Fact is, India redirected aid and relief efforts to serve interests of Indian state - at expense of victims and those helpless, suffering victims in Kashmir".

Here's what sister Hafsa Kanjwal, Ph.D. student in Michigan writes about this:

As late as Sept. 17, tens of thousands of people were still stuck on roofs in the state capital, Srinagar, calling for help. Countless others have been lost in the deluge that washed away homes and wrecked entire parts of the spectacular old city.

Strangers have tied floating corpses to trees in a bid to render a final dignity. Hospitals have been rendered dysfunctional, forcing pregnant women to deliver on the street. There is a shortage of lifesaving medicines, clean water and supplies. The specter of disease looms large on all waddling knee deep through the flooded streets.

Communication has yet to be fully restored, making relief efforts inordinately difficult on the ground. For a people used to confronting heartache in a two-decade-long insurgency that has cost more than 70,000 lives, this is a trauma of different type: People are desperately awaiting news of loved ones who are still trapped.

Worst Flood in History of Kashmir

The army of India, instead of helping, has caused even greater hardships, chaos and havoc in the area and now making a claim as the saviors of Kashmir.

In the face of an absent government, it has been locals — students, shopkeepers, doctors, teachers and journalists — at the forefront of rescue and relief efforts.

Impromptu relief camps have been set up throughout Srinagar where food, clothing and medicine donated by neighbors are being distributed.

On their own accord, youths have built makeshift rafts and organized inflatable boats from Delhi, venturing into hard-hit districts, hoping to provide relief to families still stranded in their homes.

The Kashmir diaspora throughout the world has also responded, sending as many shipments as possible and coordinating awareness campaigns.

Despite such grass-roots efforts, organized international aid is desperately needed. By keeping international agencies at bay, the Indian state, army and commercial enterprises have positioned themselves as the sole saviors of the Kashmiri people in their plight — thus enforcing the narrative that Kashmir needs India and cannot survive without its support.

To be sure, the Indian army has played an important role in relief efforts, claiming to rescue about 100,000 people. But many have complained that the army has been prioritizing the families of those with political influence as well as tourists. A week has passed since the rains ended, and people here are furious with the speed of the rescue efforts.

Under these circumstances, then, the Indian army, which has otherwise wreaked havoc in this region, is attempting to seize the stage as the saviors of the Kashmiri people. Indian media — including LiveMint, Rediff and CNN IBN — have lost no opportunity to cover the efforts of their brave soldiers as they risk their lives, allowing the Indian and international public to see a politicized, one-sided story.

3 days into the disaster, seasoned journalist Burkha Dutt on her TV show TimesNow on NDTV, had the nerve to ask if the rescue mission would be a turning point for the army in Kashmir.
And her guest declared, "The Indian army stands “vindicated” for the 60,000 thousand deaths in the valley mourned by those with an anti-Indian stance, because now India has saved that number, and more.. in the floods."
"That is the kind of political stance and ideology used by the terrorists", commented one viewer.

Hafsa Kanjwal is a Ph.D. candidate in history and women’s studies at the University of Michigan at Ann Arbor, focusing on contemporary Kashmiri history. Now with relief moving slowly, Kashmiris blame Indian government and the Indian army more than ever before. The irony, then, is that India’s PR scheme to take credit for the rescue effort has now backfired.

Homes are gone, or destroyed beyone repair by the floods, water everywhere - but too dangerous to drink or cook with.

No clothing, no shelter, little if any food, drinking water almost nowhere - no way the Kashmir people can rebuild or repair without materials, tools and volunteers.

Winter is fast approaching. The Kashmiris are most desperately seeking help. All the while the rest of the world helplessly watching, unable to do much, except through the network of government red tape, or payoffs and bribery.

World governments must pressure the Indian government to allow a sustained international relief effort to rescue those in trouble, manage the threat of public health epidemics and help rebuild from the disaster.

The views expressed in this article are the author's own and do not necessarily reflect ISLAM NEWSROOM editorial policy.

#3 nisar 2014-09-23 00:03
Need help only
#2 kaiser 2014-09-22 16:14
We are not expecting any help from India because we know they have been killing over families they raped, killed more 100,000 people in the name of terrorist stealing kidnapping pay r we will kill him in encounter that is was terrorist But rest of the world who have been visiting kashmir and they way have been treated like family not as tourists. So we have write to ask you as we are family
We need you help
#1 Aqib bashir 2014-09-22 00:01
Asalamu Ali Kum
We need ur help
So many people are affected n we need more n more medicines.
Indian policy are always like that towards kashmir because we r only intergal part of kashmir . Not humans
Refresh comments list
RSS feed for comments to this post