A girl aged 12 and three months and her 13-year-old boyfriend have become Britain’s youngest parents, it emerged last night.

The mum was just ten years old when she met the dad and was still at primary school when she fell pregnant.
The young couple, from north London, celebrated the birth of their baby daughter at the weekend and have vowed to stay together as a family.

The girl is five months younger than the UK’s previous youngest mum while her mother becomes one of the UK’s youngest-ever grans at the age of 27.

One person said, “The baby’s mum and dad have been in a relationship for more than a year, so this isn’t a fleeting romance. They intend to stick together and bring their daughter up together.

"Grandparents on both sides are supportive of the whole situation. However it is a difficult situation due to both of the parents being children themselves.

NOTE: The world’s youngest mum was pregnant at ONLY 4 YEARS OLD!
Lina Medina from Ticrapo, Peru, gave birth to her first son Gerardo when she was just five years and seven months herself back in 1939.
And she was pregnant again while he was ONLY 1 YEAR OLD. 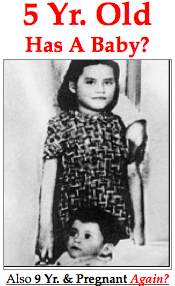