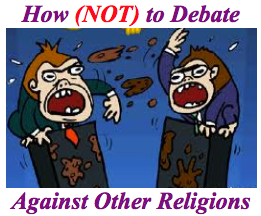 This is a common question from many people, asking about debating, especially the Christians: 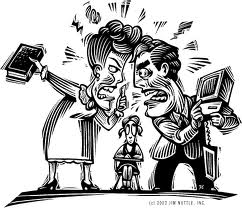 Salam alaykum. There is a Christian at work who is learning Islam. I tried to debate with him and show videos of"debaters" against Christianity.

Now (my co-worker)is convinced about the corruption in bible.

But he says he has very strong sentiments towards Jesus Christ (peace be upon him) and says he believes that Jesus is his savior (although the basis of this is Bible, which he also accept to be corrupted).

He accepts that bible in his hands is not the word of God. But he is not easy to argue with about Islam.

I gave him videos of Ahmad Deedat and other debates, but so far it didn't seem to help. Could you give me advise how to proceed with my friend?

Thank you for writing and for your questions concerning helping someone come into Islam from Christianity. I am happy and honored that Allah has guided you to write to me about this most important subject. We have been able to help thousands come into Islam, by the Mercy of Allah. Al Hamdulilah. 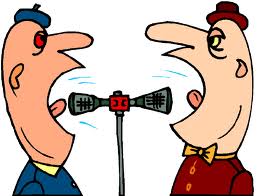 I would like to begin by mentioning that debating and discussng with people is one of the proper and good ways to introduce the beauty of Islam.

However, the idea is to present differenting view points in a sophisticated manner to bring about better understandings for the speakers and the audience, for mutual benefit.

This is actually in Islam but those who debate with the Christians just for the sake of promoting their own agendas and debating to bring big crowds to hear them do it are not the best way. These methods have been known to make more trouble between us and them than some wars. This is not so much true debating for the sake of gaining proper knowledge, as much as it is, debating for the sake of getting attention and making some people famous or selling their books and ideas, etc. 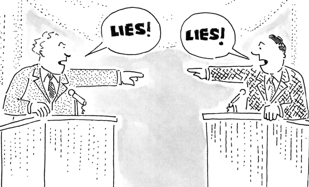 I am sorry to tell you that we are not at all impressed with this type of "dawah." It is not fitting for good Muslims to attack any other religion in this form. Those who are attacking Islam love to use these tapes and books as a way to put us down and show us as being intolerant and rude. They also sell these videos to promote further division between us and them. This is the opposite of what we are instructed to do with the Christians.

I have spoken with certain callers to Islam about this and talked with them about not continuing in this way. You see I have been a Christian and I would not have appreciated this type of approach being used by these people. I would have become a bigger enemy to them and to Islam.

Al Hamdulilah that the one who did call me to Islam used the formula mentioned by Allah in His Book. That is to say, that we should approach them in the best way with the best of words and speech, arguing in a way that is 'better', meaning that we don't insult and attack them, rather we show them the good things of Islam that appeal to the believers of the Book.

Let me give you an example of how we generally reply to the Christians who write to us on a daily basis. Suppose they ask a very harsh or even insulting question, like; "Why do you Muslims have to kill all the Christians?" (Of course, we do not have such notions and this is not what Islam is all about - but this is the type of question that comes to us from time to time).

So, what would be the best reply to such a question? Shall we open a debate about the verses in the Quran that deal with "kiling the disbelievers?"

Debating is what got us into the discourse to start with.

Here are examples of the use of the word "argue" in the Quran and what the results are from the Tafsir of Quran:
http://www.qtafsir.com/index.php?searchword=argue&x=0&y=0&option=com_search&Itemid=610 (click)

And these are examples of the word "debate" in Quran tafsir:
http://www.qtafsir.com/index.php?option=com_content&task=view&id=2926&Itemid= (click)

Here are some clear proofs for NOT debating in the way people are doing today:

("..and fair preaching") meaning, with exhortation and stories of the events that happened to people that are mentioned in the Qur'an, which he is to tell them about in order to warn them of the punishment of Allah.

(and argue with them with that which is best.) meaning, if any of them want to debate and argue, then let that be in the best manner, with kindness, gentleness and good speech, as Allah says elsewhere:

(And do not argue with the People of the Book, unless it be with that which is best, except for those who purposefully do wrong.) ﴿29:46﴾ Allah commanded him to speak gently, as He commanded Musa and Harun to do when he sent them to Pharaoh, as He said:

(Truly, your Lord best knows who has strayed from His path,) meaning, Allah already knows who is doomed (destined for Hell) and who is blessed (destined for Paradise). This has already been written with Him and the matter is finished, so call them to Allah, but do not exhaust yourself with regret over those who go astray, for it is not your task to guide them. You are just a warner, and all you have to do is convey the Message, and it is He Who will bring them to account. 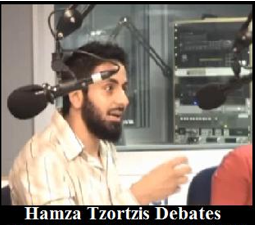 There is one particular presenter of Islam, a convert to the faith named Hamza Tzortzis. He is excellent, maashallah, in every aspect of the way he presents, shares and even helps his opponent in the debates. His fairness, patience and even mindedness make him one of the best examples we can offer for anyone interested in this area of discussion for Islam.

Another presenter and teacher of Islam who has engaged in the Doha Debates is Dr. Yasir Qadhi. You might like to compare some of his talks (online) to see different ways to handle the topic of mutual discussion for the benefit of everyone. 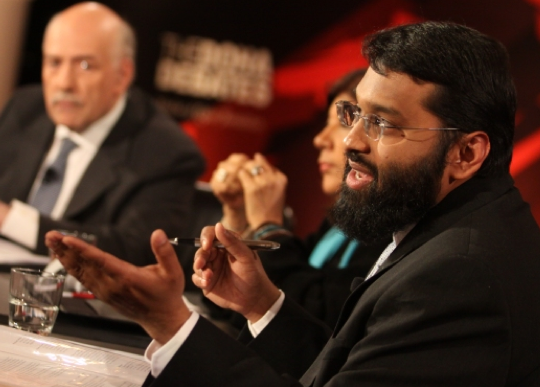 Now let us examine the methodology of the prophet, peace be upon him, in dealing with these types of people. We should also add that we have had a tremendous success ratio in presenting Islam and having many of these same people enter into Islam, Al Hamdulilah. Allah is the One who Guided them to Islam, but He let us be there and let us be the reason for them to enter into Islam. Al Hamdulilah.

Now, here is a sample of how we present Islam to the people. You can write it down, memorize it and share it with others, inshallah:

Thank you, for asking about my religion.
We Muslims believe in One God, and we were all created by Him in this life for a test, to see if we would worship and praise and thank Him for all that we have and ask only Him for what we need.

We understand for those who deny Him or set up partners with Him in worship from what He has created, they would fail their test.

This simple message of Islam is: "Laa elaha illa lah" (There is none worthy of any worship except the only One worthy of worship, Allah).

This may sound a bit over simplified, but it is the essential of Islam. We would now like to offer a few basics of Islam to help you see how we come to this conclusion.

Basics Of Islam - from our dawah site: 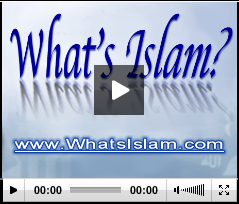 o B) Teachings of Muhammad [click]
This is a unique part of Islam, not available in any other ancient religions.

5. Answer:
(this is the area where we answer their particular questions in details with the references)

Thanks again for your question. All good is from Allah mistakes were from myself.
May Allah guide us in Truth, ameen.
Salam alaykum,
Yusuf Estes

Answers from Sheik Yusuf Estes, American born, former Christian music minister and National Muslim chaplain,Delegate to United Nations World Peace Summit 2000. He is a student of many scholars from Egypt, Kuwait, Syria and Pakistan. His answers are based on information about ISLAM in easy English from Quran and teachings (hadeeth) of prophet Muhammad, peace and blessings be upon him.

You Type It - We Print It
(after review)

#9 Vikas Rai 2014-09-05 11:14
There is only one True Religion i.e. Islam
#8 asking why 2014-09-02 18:32
Why do Muslims say that they are a religion of peace when they do not form their own armies to fight the terrorist using Islam as the reason to rape, murder, steal, and reign terror on so many innocent victims???
Why do they just sit back and expect the free world to fight them and clean up their "mess"

you do a disservice to your religion by not doing so and leave the impression that all Muslims really do believe that all mankind should worship Allah or DIE. You are telling the free world you actually support this barbaric killing and raping and stealing of lands and money by not forming an army to fight these Muslim religious terrorist and making the free world go at it alone.
in fact what you are doing is making us all fear Islam and all Muslims since you all seem to agree your way or death is the law of Islam.
So I ask again this simple question, why don't you fight them yourselves with a massive army of Muslims of peace???????
#7 Stephanie 2013-10-22 08:35
Mr. Yusuf Estes, i thank Allah to have you around with me and all of us about the faith in Islam. You are so cool! May Allah have mercy on you and family.
#6 Ibn Masud 2012-03-15 22:29
Sheikh, you have featured with Dr. Zakir Naik on his Peace TV. You have spoken about the studies of Shaikh Ahmad Deedat. I know Shaiukh Deedat was bit
#5 mohamedrashaad 2012-03-15 09:13
assalamu alykum sheikh yusuf masha allah am so happy nd proud ur hard work may allah accept ur efforts nd reward you with jannatul fardows aclaa allahuma amiin a muslim brother from somalia jazzkalahu kheir.
#4 Kaazim Mateen Butt 2011-09-22 02:27
Sheikh sahib you have insight into the minds of the Christian pastors.
In Nairobi there are countless churches and I have personally met "pastors" who were watchmen; some looked like they were jobless before becoming "pastors". These guys dont even talk much about religion!!
#3 Faridha 2011-06-09 05:53
Assalamu alaikum wrwb! MashaALLAH wAlhamdulillah ya Sheikh Yusuf,may ALLAH SWT rewards you and your family best dunya wal akhirah and may ALLAH allow me to impart what I have learned from you regarding Arabic and Islam in my lifetime InshaALLAH by presenting and making complicated things simple and understandable with appropriate strategies on how to do it. Jazakallahu khayran katheeran!Inclu de us in you du'a.
#2 mubarak 2011-06-08 13:54
alhadulilALLAH ya sheikh i really love u by ALLAH. May ALLAH reward you with jannah firdausy
#1 Yusuf 2011-06-08 08:54
Assalamu alaykum wa shukran, Br. Yusuf for the fine work that you've done. I find your work very inspiring and informative. I'm proud to call you my brother in Islam.
Refresh comments list
RSS feed for comments to this post