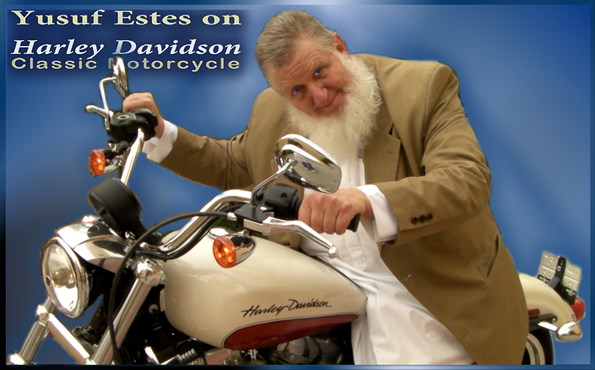 Trying to "Ride" a Harely

While shooting a promo for Guide US TV, Yusuf Estes "Dropped" by a friend who has a Harley Davidson motorcycle. While playing around, he dropped it but it did not get hurt (and neither did he). LOL

Not to worry! -- Nobody injured - (Well OK, maybe a little embarrassment - LOL) - When Sheik Yusuf Estes tried to ride a motorcycle while visiting some Muslim bikers in Doha, Qatar last year.

This video came from a private collection recently showing Sheik Yusuf sitting on a classic Harely Davidson motorcycle. Just as he tried to move forward, the Harely began to slip out of his control and started to fall toward his left side.

Others had to stop filming and try to catch the bike (and the sheik) before anyone (or the bike) could get hurt.

Later after this video was discovered, we asked him about them.

Sheik Yusuf said, "Well I sure can't deny I tried to ride on it, but somehow it got away from me before I could even get out of the driveway. I am not sure how these guys can stay on such large machines and for sure, I will not be trying that again anytime soon".

If you have the same problem I do with this video not playing right..
CLICK HERE for video site 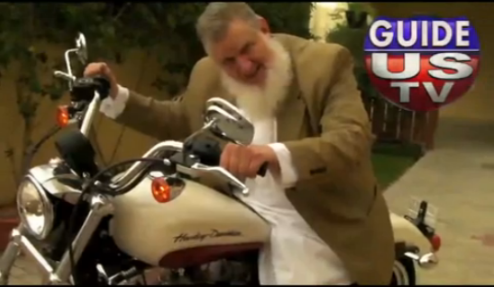 Sheik Yusuf travels the world to promote the peace & love of true Islam in English. He shows Muslims how to live in today's world as productive, kind citizens while working alongside their non-Muslim neigbhors for the common good.

He has satellite TV, over the air antennas, and a radio show playing 24 hours a day all across Canada and USA.

His travels often take him to the Gulf, Africa, UK & all across the United Sates.

Join Him & Tell Others to Do the Same 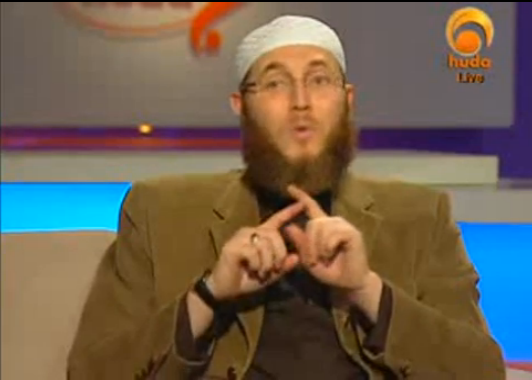 Follow him & all the Guide US TV team on events page on
www.IslamEvents.com/yusuf and his Facebook pages online.

Sharing links to our pages helps others to know
where to find what they need - when they need it -
From the Islamic point of view, inshallah.

Comments
You Type - We Print
(after review)

#1 Muhammad Kabir 2012-08-13 12:25
As salamu Alaikum war rahmatullahi wa barakatuhu,
Oh Brother, I love your work and seriously I'm addicted to it. I have being inviting friends to come and watch your programs in Peace TV. But it would've been greater if you can come to Nigeria.
If you accept to come, then reply me and Insha Allaah, I will do my best to make all necessary arrangements as to your coming and staying.
Jazakhallahukhairan for all the good jobs.
Barakallahufi'i
Refresh comments list
RSS feed for comments to this post