Note: Prophet Muhammad, peace be upon him, ordered his followers "Be the best to your wives" and he forbade them to beat their wives (a common practice when Islam was being established).
Do not confuse what some bad people do with what Islam teaches us to do and what not to do in the form of true Islamic Law (Shari'ah).
This is similar to the Law of Moses for the Jews and the Christian original teachings of patience, kindness, forgiveness and love of peace.
You are encouraged to add your comments at the end of this article. 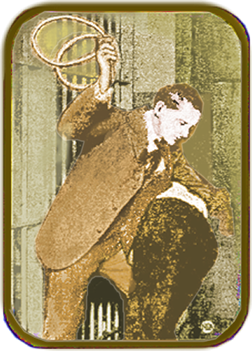 Being soundly thrashed as a “wife beater” with an 18-inch piece of garden hose by a judge over his knee in a jail cell when arrested on a charge of intoxication, doesn’t appeal to John Caves, 40-year-old bricklayer.

Neither does he relish being held up as a warning to future husbands, who take a few whacks at their wives. 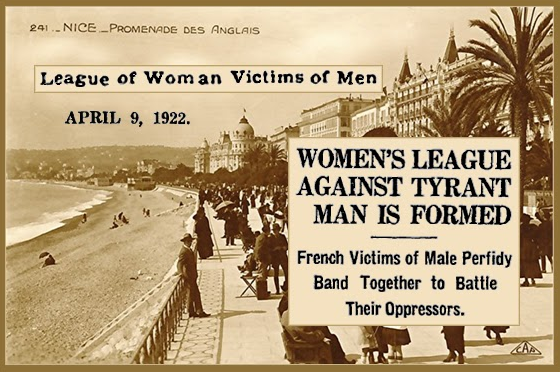 Caves, having imbibed a bit too freely, was awaiting sentence in jail, when Municipal Judge E. E. Zesiger, armed with a piece of garden hose in his hand, entered Caves’ cell, laid him across his knee and gave him 20 stripes “to cure him of wife beating.”

Now – and thereby hangs a tale – it so happens that Caves has been arrested not for abusing his wife but for being intoxicated. Caves insists she’s not a poor abused woman, saying. “John has never laid a hand on me,

Caves agrees with the judge most heartily. “A whipping post would be just punishment for a man who beats his wife, but I certainly object to being treated as one, when I have never once struck my wife during our entire married life,” says Caves.
“I suppose the judge did get tired at seeing me in court and he so forgot himself and the dignity of the bench as to lick me. It would have been bad enough if he licked me, without authority, when I was jailed for intoxication, but to think people got the impression I beat up my wife —that’s terrible”
A session in jail on an intoxication charge is an old story to Caves, who says, “I know I drink too much, just can’t let the stuff alone, but I guess we all have our failings and I never lost a day’s work through being drunk.” 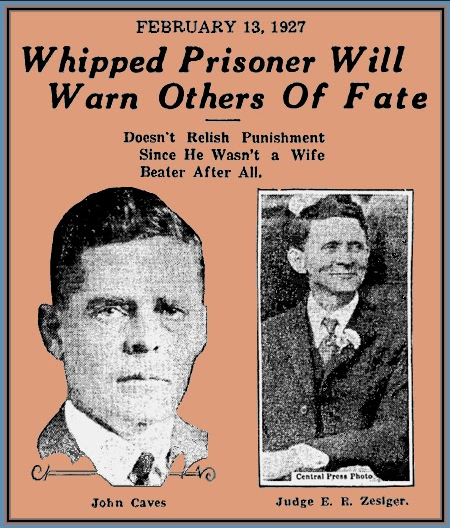 ~ Old Friends. ~
Caves has known Judge Zesiger for 20 years or more. When young men they worked together, Caves as boss of the bricklayers, and the judge as a carpenter. Their. positions have changed since then. Zesiger is a dignitary of the municipal court and Caves—well Caves Is still a bricklayer, In the three years that Zesiger has been on the bench, Caves has appeared before him many times, always on a charge of intoxication.
“I talked with Johnny many times, gave him the pledge and tried to help him in every way,” says Zesiger, “but to no avail. His wife often complained to me that he had struck her, so when I saw him in jail again the other day I just took the law into my own hands or the bull by the horns, as the saying, goes, and laid him across my knees and thrashed him. I know I haven’t got a legal leg to stand on, but he deserved a licking and I gave it to him.
“If we had whipping posts in Ohio there’d be less crime. A wife beater is a coward and he’d shrink from a public lashing.”
Prominent citizens and club women who endorsed the judge’s action while under the impression that Caves had actually been arraigned for wife beating are a bit dubious as to the wisdom of the endorsement.
~ Another "Wife Beater" - Same Judge But Different Ruling?
Shortly after Judge Zesiger chastised Caves, another man was brought before him on a charge of beating his wife. The judge turned to the wire, whose swollen blackened eyes were the result of her husband’s cruelty
Judge Zesiger and handed the little woman the same hose he used on John Caves, and told her to use it to whip her husband. She refused, saying she was not physically equal to the task.
~ Wife Beating - Common in France & Ameirca Until 'Women's Sufferage' & The League of Women - 1922
FULL TEXT:

And Mrs. J. Eakin Gadsby, well known club woman, and District president of the Woman’s National Rivers and Harbors Congress, paused for breath before she recovered sufficiently from the shock.

And she tells us what she thinks of Baltimore’s revival of the whipping post as a mode of punishment for wife beaters.

"Why, it’s simply barbarous, that’s what it is,” she announced. “Never having been beaten, I cannot appreciate the emotions of a woman whose husband uses this method of coercion."

"But a whipping post? It belongs to the dark ages I wish I could speak as strongly as I feel. The thought of cruelty to the flesh of any human being as a mode of improving his morals is so mediaeval, so altogether revolting, that one can only wonder what has driven an enlightened city like Baltimore back to three hundred years or more In its methods of dealing with wife beaters.

“Charge a fine to the man who beats his wife, or lock him up. But don’t degrade him and the community, by putting him in the whipping post, and beating him for the amusement of the public.”

~ Note: Her opinion is very much like the Saudi Judge in the next (#3) story ~

By Islam Newsroom correspondent, Kingdom of Saudi Arabia
JEDDAH, K.S.A. — The Penal Court there found a man guilty of beating his wife. Judge orders payment of $7,000 SR to his wife, he is to be deterred and he must memorize five parts (Juz') of Quran and Hadeeth (authentic teachings of Muhammad, peace be upon him)
The court decided to set an examination for the man after six months from the date of the verdict.
The judge advised the husband to protect his wife’s rights as stipulated by Islam, perform obligatory prayers regularly and repent to Allah for mistreating his wife. The man did not object to the verdict.
The court proceedings indicate the sister wanted to visit a female relative. The husband initially agreed but later changed his mind.
He then asked her to get him a glass of water but she refused. He went to the kitchen and his wife followed after him. He became more angry and became physical by slapping her.
She then ran to the bedroom to grab her clothes and take off for her father’s house. The husband became even more upset and angry and began to beat her harshly.
The King Fahd Hospital in Jeddah showed in a report, the wife had suffered bruises on different parts of the body including head, legs and arms.
The sister filed a complaint with the police and the case was referred to the Bureau of Investigation and Prosecution (BIP), which framed the charges against the man.
Immediately the BIP stated: Wife beating is Haram (forbidden) and is punishable according to Shari'ah (religious law).
The prosecution demanded mandatory deterrent for punishment and the judge ordered additional instructions to be fulfilled before the man would be removed from judgment.
After the wife received SR 7,000 as compensation for her physical suffering from her husband, she dropped charges that would have caused him to experience the same physical abuse she endured from his hands.
The judge's verdict against the husband included memorizing 1/6 of the Quran (5 juz') and to study 3 books of Islamic Law and punishment (Shari'ah) as well as Rules of Worship, Pillars (5) of Islam by the former Mufti of Saudi, Sheikh Abdulaziz Bin Baz, may Allah have Mercy on his soul, and a book on supplications (dua') by Ibn Al-Qayyim "Al Wabil Al Sayyib" - and he will be examined on all of this before being freed from the judgment against him.
According to sources, the sister is pleased with the outcome and ready for him to come back (with his conviction to follow true Islam).
But what can be done to assure these things don't happen - again!?
Islam adivses the young people not to marry for looks, money or social position. Consider having your parents check out the wife or husband to be - BEFORE YOU GET INVOLVED!
Advice: Play it safe and ask Allah and your parents for GUIDANCE - You'll be glad you did.
What Do YOU Say About "Wife Beaters"?
COMMENT - FACEBOOK - TWITTER
Tell Us What You Think
You Type - We Print (after reveiew)
Please Do Not Click More Than One Time

#2 Ibn Adam 2012-05-10 23:49
This proves USA was close to Islam in 1927 and judges did allow whipping of those who were oppressive.
I think someone who rapes a girl or beats a girl or even hits a girl should be punished - and I don't mean just put him in jail for a week.
He has to know it is a crime and she has to know she is vindicated by this judge.
Otherwise, the bad person thinks it is OK to do it and the victim feels helpless and thinks there is no justice.
Thanks for this story.
#1 amazed dude 2012-05-07 06:00
are you saying the woman in 1922 said like a judge in arabic today? so she is backwoard or something?
I think this judge should let wife desicde for herself what to do for him
Refresh comments list
RSS feed for comments to this post