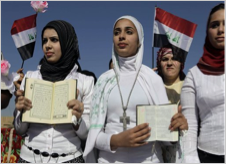 One thing we all learned about Muslims during the Arab Spring (civil revolution) in Egypt - Jews, Muslims & Christians can, and should take each other as friends, cooperating together for all that is good.
The picture (above) is a strong proof for those who would deny one of the most important teachings of Islam - after your good relationship with your Lord, the next important relationship is with the people.

The word in Arabic is "awliyah", it is clear from the Arabic, it is not permitted to fight anyone, especially those closest to you in faith, if they are not fighting against you, turning you out of your homes or causing chaos against you.. (read)

The Quran - it is clear about being righteous & just to them:

Sahih International:
Allah does not forbid you from those who do not fight you because of religion and they do not expel you from your homes – from being righteous toward them and acting justly toward them. Indeed, Allah loves those who act justly.

Sahih International:
Allah only forbids you from those who fight you because of religion and expel you from your homes and aid in your expulsion – [forbids] that you make allies of them. And whoever makes allies of them, then it is those who are the wrongdoers.

We see - Muslims do not have permission to go beyond limits - ever!
Note: ("awliyat" - refers to a position of closeness, confidentiality and trust; also allies or guardians over affairs in office of public trust or advisors in authority)

Thank you for asking about our religion and what it teaches. Islam provides proof and testable evidences for claims made from its texts (Quran and Hadith).

The Quran is actually "THE QURAN", only when it is in the Arabic language and as such, there is no perfect translation. There are two reasons for this, one being the difference between the Latin based "English" and the Semitic based "Arabic." The second reason is a bit more in depth, that being, the Quran means "Allah's Recited Speech to Mankind in the Arabic language" (even then, this does not totally fulfill the whole meaning of "Quran."

Some of the words are arbitrarily translated into English words only because there were not enough choices in English.

First, here is the more or less, transliteration of the sounds to English letters to assist you in understanding the actual sounds of the Quran:

(2). Zalimun (also pronounced as THalimoon) could carry the meaning of; oppressor, self oppressed, polytheists and wrong­doers and unjust.

Here, we offer more or less, a translation and interpretation of the meaning to English:

"O you who believe! Take not the Jews and the Christians as Auliya(1) they are but Auliya(1) to one another. And if any amongst you takes them as Auliya(1), then surely he is one of them. Verily, Allah guides not those people who are the Zalimun(2)."

One of the many beauties of Islam is a miracle in that the Quran is still complete, whole and in the original language (Arabic) as it was when it was sent down to the prophet Muhammad, peace be upon him, 1,400 years ago. Another miracle of Quran is, no one can ever bring a book like it.
For centuries the enemies of truth of Islam have attempted to duplicate or produce a book like it, yet they are unable to do so. The Quran is not to be translated or interpreted according to prevailing meanings or understandings of words in a given society or time frame. Rather, the Quran is to be understood first and foremost by comparing meanings within the Quran itself and then referring to the meanings offered by the prophet Muhammad, peace be upon him.

There are verses like this in the Quran, such as in chapter 5, verse 51 (Surah Al Ma'idah, 5) clearly instructing the Muslims to avoid taking on the Jews and Christians in positions of allies thereby replacing the allegience owed to Allah (see ref. surah Baqarah, 2:257) and thereby offer confidential authority or trusted guardianship (sometimes wrongly translated as "darlings").
The word "Auliya" has been simply translated as "friends" in the past, due to a lack of exact translation to English. However, the usage of such a simplistic term would be most inadequate when other verses talking about the relationships between Muslims, Christians and Jews are taken into considerations. This naturally necessitates a more in depth explanation and understanding of the term “auliya” when used in the context of the verse or verses.

Both at the time of revelation and in modern times, we can see clear evidence of what happens to the condition of the Muslims when they turn over control of government and place total confidence of the disposition of their affairs in the hands of others.
From the evidences provided by Quran in Arabic and hadith (teachings of Muhammad, peace be upon him), we conclude the best interpretation of the word "waly" is "ally" and "auliya" is "allies." This clearly shows Muslims not to give their pledge of authority and leadership to other than Allah, even if it is to those who are the closest to the Muslims in their faith. See the reference to this relationship in surah Al Imran (3:110) and other places.

It must be mentioned however, this does not preclude assigning key positions to qualified individuals from the Jews and Christians when warranted. This is demonstrated at the time of the prophet Muhammad, peace be upon him and in the Islamic governments that followed after him, even up until the fall of the last Islamic empire under the Ottomans in 1922.

For more dicussion on this topic please use our search engine at: www.searchforislam.com and use the words "wala" and "bara."

Does "Allah" mean "God?" - find out why not: www.GodAllah.com

What are the similarities and differences amongst Islam and Christianity? - get the facts: www.BibleIslam.com www.911bible.com