Yusuf Estes Has Seen 1,000's
Enter or Convert to Islam

But Why Does He Call Them 'REVERTS'?

Why do some Muslims, like Yusuf Estes, use the term "REVERTS" instead of "CONVERTS" when referring to those who choose to become Muslims and enter into Islam?

Answer: First of all, it is true - Islam is still, today - the fastest growing religion on earth. Al Hamdulillah, this is proof of something much more influencial than just another, ordinary man-made religion. But that is a topic for another article.

The common statement coming from almost every one of these people was simply, "Because Allah Guided me..."

OK, many people entered into Islam. But why refer to them as "REVERTS" instead of "CONVERTS"?

The reason for this is because prophet Muhammad, peace be upon him, said, "Every child is born on the 'FITRAH' of Islam. It is their parents who raise them up to be a Jew, Christian or fire worshipper."

The word "fitrah" refers to the natural condition of someone. Here in particular it refers to the way of a new born baby, totally & completely innocent and pure in every way.

Any child, regardless of the religion of their parents, is born on this natural and pure inherent inclination toward being innocent and free from of any type of man-made religious proclivity or desire for objectional activities.

Islam teaches us, "Any child who dies goes to Paradise, asking God, "Let my parents to be with me".

Additionally, prophet Muhammad, peace be upon him, explained, "When someone enters into Islam, all of their previous sins are forgiven by Allah and they are now just as they were born from their mother."

The peaceful, pure and innocent natural inherent inclination of the baby - that is the TRUE Islam (not what we see from some people in the news)

What about the statement "Allah Guided me"? What does this have to do with huge numbers of people coming into Islam from all around the world, especially in view of media reports on world events?

Are all of these 'conversions' (or reversions) merely a phenomenal occurance of coincidences? (How would that be a coincidence?)

Is this just an accident that all these people prayed to the Only God of the universe and all of them accidentally said, deep down in their hearts, the words, "O God! Guide me"?

By the way, that is what Yusuf Estes tells us he said, and then "Allah Guided me . . and many others who said those same words".

Notice the word ISLAM! It means; surrender (to God), submit (to God's Will), obey (God's Laws), sincerity (can you 'FORCE' people to be sincere?) and peace (with whatever God Wills for you). Like in the Bible - "God's Will be done on earth, as it is in Heaven"

If a person becomes totally forgiven upon entering into Islam, believing in God as the One and Only One God, and choosing to believe in Jesus (peace be upon him) as the Christ, as the Chosen by God as King of the Jews, as a miracle birth, as a miracle worker - by the PERMISSION OF GOD, (and no longer as a 'god' or a 'son of a god') and then believe in Muhammad (peace be upon him) as a prophet of God and messenger to all - then does that mean they converted or reverted (came back)?

Watch some of these videos - before you make your choice (remember to ask God - "O God, guide me")

Converts (Reverts) To Islam - Who are they? . .
Christians, Jews, Atheists, Americans, French, Latinos, German and more...

Why Do So Many People Enter (revert?) to Islam?
Time to find out - www.ConvertsReverts.com 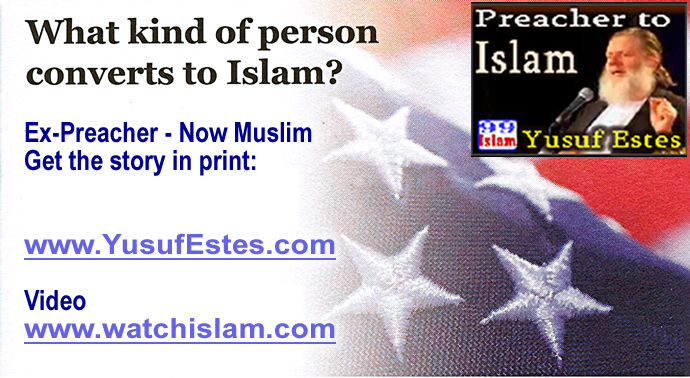 COMMENTS
You Type - We Print
(after review)
1 click Only Please