Marriage - Going to the Dogs? 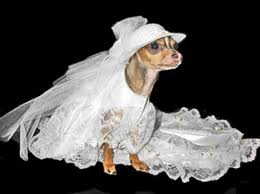 At a time when Jewish judge..

..is being accused of passing a death sentence on a dog, supposedly "possessed" by the spirit of a death atheist attorney, another story comes to mind about a 75 year old man in Kathmandu, India -
- HE MARRIED A DOG!

Cambodian Times article reported - A man in his 70's from India has married a dog in public ceremony, hoping to bring him good luck.

Read what happened to this man - and what Islam says about it.

This is from an issue of the Cambodian Times back in 2004. If you have any additional information or similar artilces for follow-up on this topic, please leave comments (bottom of this page).

KATHMANDU - A 75-year-old man in Nepal married a dog in a local custom to ensure good luck only to die three days later. Following a Tharu community custom which holds that an old man who regrows teeth must take a dog as a bride, Phulram Chaudhary tied the knot with a dog in Durgauli village in southwestern Kailali district.

"He believed that this would help him avoid great misfortune later in life. However, he died a few days afterward," the state-run daily Gorkhapatra said.

Comments from Muslim point of view:

"Islam forbids any marriage to other than opposite sex of same species," commented Sheik Yusuf Estes, former Christian preacher-turned-Muslim, while traveling on tour in California yesterday.

When asked about the article about the man in India Sheik Yusuf replied, "Well, I just arrived back from India only 2 weeks ago, having spent a month or so there with both the Hindus and the Muslims. I met only one Christian during the time I was there. And none of the people I spoke with and in none of the articles in the newspapers talked about anything like this at all. I have to question the type of reporting and irresponsible sharing of information that some journalists are lowering themselves to these days. May Allah guide us all, ameen."

When asked for comments about marriage of humans to animals he simple stated, "I have said all I am going to say on this subject. I prefer to think about my Lord and try to live as a good Muslim."

We also have a number of other popular sites for both Muslims and non-Muslims. Here are only a few:

And be sure to check out this site for GuideUS.TV (all over America) www.GuideUS.TV