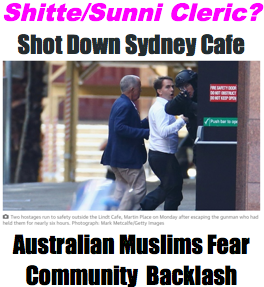 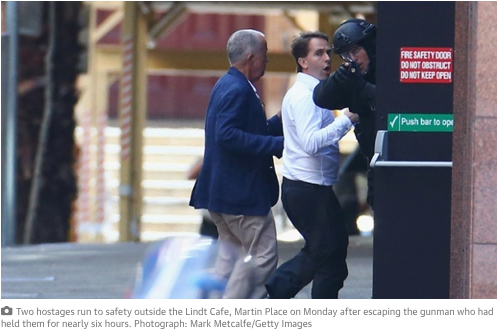 Sydney, Australia ~
A deadly military-style siege on a central Sydney cafe just ended today - But the real investigation has just started.
-- Australian Muslims worry, Aussie community may see this as from Islam and retaliate or take revenge against innocent Muslims.

New South Wales police Commissioner A. P. Scipione told the reporters, police “moved in some 16 hours after the siege began, following sounds of gunfire inside” (the cafe).

The hostage taker and 2 of the seventeen hostages were killed. Investigators can not establish at this time, exactly who killed who. The police raided the building, after filling it with fog-like smoke grenades, rushed in and the shooting began, leaving 2 innocent people and one crazed man dead.

The hostage taker has been identified by police files as: Haron Monis, a.ka. "Sheikh Monis".

The two hostage victims are identified as Katrina Dawson, age 34, an attorney and Tori Johnson, 38, duty manager of the cafe.

Others were also injured, including one police officer who suffered some facial wounds from shrapnel or buckshot pellets.
Police reported that all were currently in stable condition.

Who was the man behind all of this? ~

Mentally unstable and delusional, Monis claimed he was a "sheikh" (cleric) although he was from Iran where clerics are called "Imams". He was convicted last year (2013) for disturbing the peace, and other charges, while claiming the police are "Hitler's Soldiers".
According to the offical police files and witnesses on the scene it appears the suspect gunman was identified as a Shiite/Sunni cleric (self-styled Muslim) going by the name of Haron Monis and calling himself Sheikh Monis. However, nothing has been established to confirm whether or not Mr. Monis had any affiliation with any recognized Shiite or Sunni organizations.

Clarification for our Muslim readers:
Clerics in the Shiite faith are called “mullahs” or “imams” some are educated by studying traditions and "Shiite" laws. Others are hereditary Imams and they simply inherit the titles by birth rites, being decedents of Ali, the cousin of Prophet Muhammad, peace be upon him. Often uneducated villagers call any literate Muslim a “mullah” (cleric).

Australia’s Prime Minister, Tony Abbott gave this report to the pubic today (Tuesday), “Understandably, there’s a lot of speculation, but it will take time to clarify exactly what happened, and why..”

Abbott also stated, "These events do demonstrate that even a country as free as open as generous and as safe as ours is vulnerable to acts of politically motivated violence," the Prime Minister said. "But they also remind us that Australia, and Australians are resilient and we are ready to respond."

Locals are asking, “What did he want?” and, "What’s his reason?” also, “Why here?” Good questions.

Why that location?
Why these people?
What were his demands? ~ 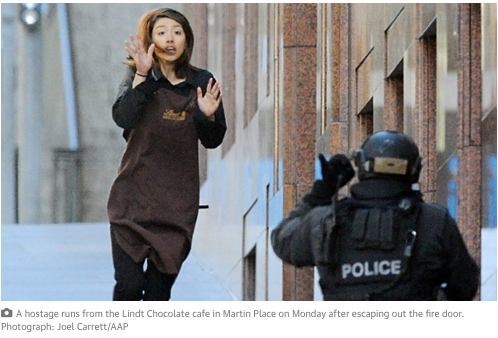 Reports from Sydney tell us, a lone and armed gunman went into a local cafe where folks were just having the morning coffee, took 17 people hostage for over 16 hours before a S.W.A.T. style police team stormed the cafe killing the gunman and taking charge of the situation. 2 hostages were reported killed in the process. No word of who actually killed the hostages at this time, according to the police Commissioner, A. P. Scipione.

Suspect Had Violent Past

The suspect, identified as Haron Monis, according to one official with direct knowledge of the situation, was known to police and government officials as a "radical Muslim type" with crazy ideas.

According to social media posts, the hostage-taker appears to have embraced a radical theology, who some claim, is a radical group of either Shiite or Sunni Muslims.

What did authorities already know about him? ~

Prime Minister Abbott told reporters, Monis was already well-known to authorities, also he had a "long history of violent crime, infatuation with extremism and mental instability."

His demands were strange. ~

Just before the police raid took place, Monis made some demands. He wanted a flag and asked to make a call directly to Prime Minister Abbott, according to CNN Sky News in Australia.

The demands were communicated by hostages who were contacting media organizations (evidently by using their cell phones). No confirmation on exactly who or how this occurred as yet.

Hostages also said they had been posting messages on social network (Facebook, Twitter, etc.) and even posted videos on YouTube.com.
Police ordered media not to publish or refer to the videos posted by the hostages. Again, noo word as to why, or at this particular time.

The man, Monis was found guilty in 2013 of writing letters to relatives of service members, telling them the service men were, “Hitler’s soldiers” - according to Australian media.

There is no reason at this time, to think Monis was acting on behalf of any particular group or organization. He appears to have been acting all on his own.

He was a man clearly possessing serious dilemmas and mental issues, according to U.S. law enforcement and intelligence agencies, aware of this man.
They say he was nothing more than a local problem, a very confused and mentally disturbed individual.
It is possible he used religious extremism to pull off some type public statement. 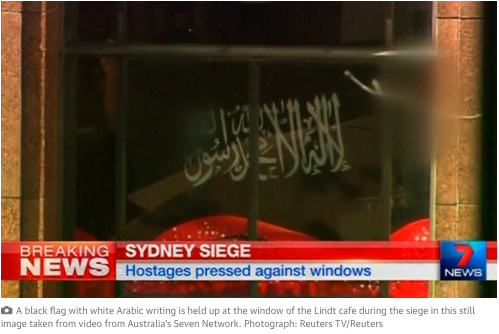 The small cafe in Sydney’s business district was surrounded by hundreds of police, including a number of snipers ready to take action, shortly after reports came of the hostage situation occurring around 10 in the morning Monday (6 PM New York time on Sunday night).
The situation continued with hostages sending out messages, videos and pleas for help.
Night came and the cafe was in the dark.

Time lingered on, as police and government officials conferred with each other as to what steps to take and how to handle this unprecedented event.
Long and tedious hours passed until the events escalated to something so quick and confusing, even those involved are still not saying exactly how it all happened.

Police tossed a number of flash-bangs into the cafe, filled the building with fog-like smoke and blinding light.

Screams, shouting and the explosions of the flash-bangs were going off when police say they heard the pop of a gun.
Hostages were running out to the cafe, getting out as fast as possible, hands in the air so as not to be mistaken for the hostage taker.

Afterwards, emergency medical teams went in after police to bring out victims on the stretchers, one is reported to be receiving CPR.

After the smoke cleared away, the suspect, Monis lay dead in a pool of his own blood.
Two other victims lay dead as well. Tori Johnson, the manager who was speaking with Monis for over 16 hours, and Katrina Dawson, mother of 3 children were all victims of this horrendous event.

Authorities following up on stories ~

Police are still interviewing people, trying to put together exactly what did take place.

One report claims, the suspect was getting tired and at some point a hostage tried to grab his gun away from him. But this is not yet confirmed.
Police will only say, “We heard shots from inside the cafe” just after 2 in the morning. Police took this opportunity to break in and take over the situation.

Photos from the Australian press showed people, thought to be some of the hostages, hands pressing hard against the cafe windows, some holding a black flag with what might have been Iranian or Arabic language on it, saying ‘Laa elaha illallah, Muhammadan Rasoolullah”.

One reported says that, five hostages came out of the cafe a few hours after the event started, running up to the police who were heavily armed, causing the hostage taker to become very angry.

Chris Reason, CNN correspondent for Seven Network said the gunman became, “extremely agitated” when he figured out what had just happened and “started screaming orders” to those hostages still remaining.

The reporter said from his view at the network’s nearby offices, he could see Monis walking back and forth in front of the windows of the cafe.
He said, Monis appeared to be unshaven, wearing a white shirt with a black head covering and he was carrying a rifle or shotgun.

The CNN correspondent, tells the story of what he thinks occurred that night. “Lights went out in the cafe”, he doesn’t say whether the authorities cut the power or if the suspect ordered them turned out.
He continues saying that in the early morning after a very tense night, police were seen throwing flash-bang grenades inside the cafe, in a video that was aired on Seven Network.

A report from a national security source in the United States says, a team of special forces troops and police entered Lindt Chocolate Cafe from two sides and killed the suspect.

Later video showed medics on the scene working on some victims and carrying out others on stretchers.

Who were the victims killed in this tragedy on Tuesday morning?

Katrina Dawson - “Katrina was one of our best and brightest barristers who will be greatly missed by her colleagues and friends at the NSW Bar," the New South Wales Bar Association said in a statement, and that she was a valued member of her floor and of the bar community.

Tori Johnson - His family also released a statement. It read, in part: "We are so proud of our beautiful boy Tori, gone from this Earth, but forever in our memories as the most amazing life partner, son and brother we could ever wish for."

BUT ~ What do Australian Muslims say? ~

"We worry our own community of fellow Australians will somehow see this as an Islamic or Muslim situation. But nothing could be further from the truth.." -- Brother Muslim in Australia

"I don't like the way some of my countrymen look at me now adays.. because I wear the hijab (cover for Muslim ladies)" -- A sister in Sydney

"How can we convince people of the beauties of our religion, when all the media do is show the crazy people who are nothing to do on Islam..." - Brother Mahmood M. in Sydney"

What do Christians in Australia say? ~

"Don't worry (person's name deleted), we are with you in this crisis. We know you and it is not from your faith." -- Christian minister in Sydney

"We're with you all the way. Muslims are my neighbors and we know this is not right what they say.." -- Catholic Christian

What do we Muslims NEED? ~