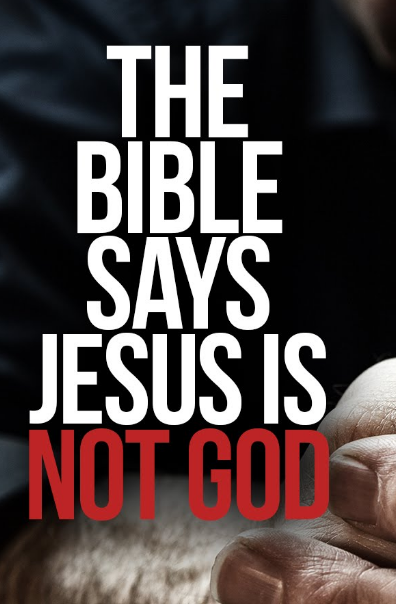 Jews and Muslims both say - "Jesus is not God"

You've heard it - I've heard it. Every good Christian worth his salt, has heard repeated regularly - and not just on Sunday either.

When I was still a Christian, making music and preaching the Word, that seem to be about everyone's favorite verse. We've all heard it and can even quote it from memory, most of us even know the chapter and verse for it. I personally memorized it when I was still a youngster.

Question: Does God really love the world?
And is it only the earth? What about the moon? Is it included in the love? And what about other planets? Would that include moons for these too? And what about the stars and all the rest of our galaxy? And is there any love for the constellations in Milky Way? Oh, and just out of curiosity - what about the black holes?

But wait - The Bible says - NOT to love the world. And anyone who loves the world, then God doesn't love them?

Do not love the world nor anything in the world. If anyone loves the world, the love of God is not in them..
[1st John 2:15]

Let's go back to the verse and continue reading . .

So, we see yet another 'contradiction' of understanding from this translation in the Gospel of St. John.

The sons of God saw the daughters of men, found them to be fair and took them to wife and went in unto them. And from them came the mighty me of old, those sons of God"
Genesis 6:2-6

And more . . in the Book of Psalms (Old Testament)

"I will declare the decree: the Lord hath said unto me, Thou art my Son; this day have I begotten thee"
Psalms 2:7

So, if David (the one who is addressing The Congregation) declares, 'The Lord says to me, 'You are my Son - Today I Begat you!' where does that leave us? If David is the 'begotten son of God' (and the Bible says 'ONLY BEGOTTEN') then it must not be talking about Jesus, peace be upon him, after all. Right?

Turns out there are "Tons of Sons" in the Bible. But the one that really got me thinking just before finding out about Islam, is this one in the New Testament . .

So, Adam is the 'son of God' and David is the 'begotten son of God' and the 'sons of God' were the fathers of the mightly men of old? Any more? Oh wait ~ We forgot Job in the Old Testament. Let's take a peak at chapter 2 and see what's going on..

Once again, we see more than just one or two or three sons - but literally 'Tons of Sons'.
After all this could there be more?
You guessed it ~ There's plenty more where that came from ~ The Bible itself . .

For God so loved(?) the world, that he gave his only begotten Son(?), that whoever believes in him shall not die(??), but will have everlasting life.
[John 3:16]

OK. You read. I read it. Just believe in the 'Only Begotten Son' and you will not die! That's what it says, right there in black & white! Don't worry about taking vitamins any more, and no more exersize or workouts. Forget about insurance policies or funeral services and grave yards. Cause if we 'Believe' - I mean 'really believe' - We ain't gonna die, brother (or sister).
How is that man?! I think we need to hear a 'Hallelujah!'

But wait a second, what does that tell us about all the people who died in the last 2,000 years? (guess they didn't believe, huh?)
Even the preachers, priests and ministers - even the pope, for crying out loud - died! They died. Didn't they believe?

But if the Book of St. John, chapter 3, verse 16 is textually correct, then what would that tell us about Jesus, peace be upon him? Anyone who dies - doesn't really believe . . .

And Allah cursed them for their disbelief and their saying against Mary a great slander . .
And [for] their saying, 'Indeed, we have killed the Messiah, Jesus, the son of Mary, the messenger of Allah'.
And they did not kill him, nor did they crucify him; but something else was shown to them.
And indeed, those who differ over it are in doubt about it. They have no knowledge of it except the following of assumption. And they did not kill him, for certain.
Rather, Allah raised him to Himself. And ever is Allah Exalted in Might and Wise.
And there is none from the People of the Scripture but that he will surely believe in Jesus before his death. And on the Day of Resurrection he will be against them a witness.
[Quran 4:157-159]

You decide. Which one do you really think makes the most sense?

Seriously, brothers and sisters - We have to think about the very words presented here. Who really said these things? Who copied them over the centuries? Who safe guarded these texts? Where were these really found, and when? Who translated them to Latin? To Koine Greek? To English?