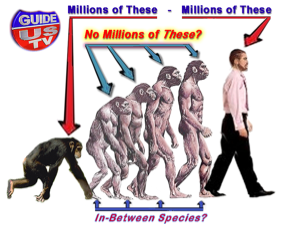 When the princess kisses a frog and it turns magically into Prince Charming, we say it is a fairy tale.
But when the process takes 50 million years for a frog to become a human, we call that EVOLUTION.

Extended time periods in the millions of years offer the evolutionist the role of illusionist. Magic, illusions and fairy tales are not confined only to children play time.

Very often we hear about yet another scientist proving, once again, Darwin's theory of evolution. However, nothing could be further from the truth. The problem is most people confuse scientific fact with scientific theory.

Current scientific theory regarding the evolution model actually conflicts with the creation model. Yet the facts of science don't!

Darwin's evolution theory holds that over a span of millions and millions of years simple life forms (1-cell creatures) slowly evolve into very complex life structures (fish). From that model, his formula progresses to assume one kind of an animal form can then evolve into another kind (monkey to man).

The creation model demonstrates all life forms must be originated from some intelligent design provided by the Creator/Designer (God), Himself.

Most creationists rely on the Biblical Creation Model that claims all life forms were created in six 24 hour days. Obviously, this would be way beyond anything conceivable from what we know scientifically about the universe today. However, this could be better understood if we consider the word used in the Hebrew Torah or Old Testament for the word 'day' in English, is the Hebrew word 'yawm' (Arabic: 'yom'). This is easily understood to me a 24 hour day, while at the same time representing a particular time in history or a specific period of time. Example: "Back in my day…" or another example: "Those people had their day, now it is our turn". We see the meaning as a period of time, rather than an exact 24 hour day. Naturally, if the sun were not created or newly created, the expression day would have nothing to do with the revolution of the earth, especially if the earth was still in its formation stages.

Stages of Evolution Imagined ~ But Not Proven

Evolutionists have invested millions of dollars and many decades searching for any fossil evidence to provide absolute, testable proof their assumptions for evolution of man from monkeys, all to no avail. If there were any fact in their beliefs, there should be ample fossil evidence of links in the intermediate stages of their imagined transitions from one species to the other.

Actually, they have not been able to provide anything in the way of solid evidence to disprove the creation model mentioned in the Quran. Millions of fossils have been discovered, unearthed and brought to museums for exhibition and display. But even so, the evolutionists still must admit there has been nothing substantial brought forward to verify their suppositions, nor have they been able to establish the links needed to confirm their fantasy of human development.

Darwin Predicted Fossils Would Prove or Destroy His Theory

Darwin thought many tiny minor changes over a long period of time could eventually add up major changes, even the total evolving from one species of life to something totally different. Darwin had predicted that someday the fossil records would either prove or falsify his theory. He acknowledged the difficulty fossil records (missing links) gave his theory.

He indicated this clearly when he said, "Why, if species have descended from other species by fine graduation, do we not everywhere see innumerable transitional forms? Why is not all nature in confusion, instead of the species being, as we see them, well defined?"

Today, top scientists and evolutionists know and even admit, that Darwin's predictions of what the fossil records would reveal - have failed.

Although it was Darwin's theory that initially started all the controversy in the first place, regarding humans coming from monkeys, today it is a rather guarded fact - many scientists and evolutionists reject his theory completely. This occurred more than twenty years ago. Professor S. J. Gould of Harvard University in Connecticut, USA, one of the foremost authorities on evolution in the world rejects most of Darwin's Theory.

He says, "The extreme rarity of transitional forms (missing links) in the fossil record persists as the trade secret of paleontologists, ...we view our data as so bad that we never see the very process we profess to study". Recorded in Natural History, Vol. 86.

Professor Mark Ridley of Oxford University said, "a lot of people just do not know what evidence the theory of evolution stands upon. They think that the main evidence is the gradual descent of one species from another in the fossil record. ...In any case, no real evolutionist, whether gradualist or punctuationalist, uses the fossil record as evidence in favor of the theory of evolution as opposed to special creation."

Actually fossils simply do not support many small changes between kinds over a long period of time. Thus, many evolutionists have honestly admitted this fact.

However, they now came up with a new theory called, "punctuated equilibrium" or the "hopeful monster theory".

Fossil records demonstrate changes DID NOT take place in small gradual steps. So now their assumption is these changes took place in quick 'quantum leaps' over very long periods of time. According to Darwin's theory, the changes were so slow and gradual, science could not observe evolution. However, the 'new theory' has the changes taking place so fast, it is now to quick to be observed at all! How is that for a total reverse? One extreme to the other. And they call religious people 'extremists'. LOL

Consider the 'new theory' evolutionists would have us believe, instead of the princess kissing the frog and instant prince charming - the new 'punctuationalist' theory says, essentially, a lizard (why not a frog?) lays an egg and suddenly - boom - out pops a baby bird! Huh?

The totally lack of missing links has evolutionists now accepting as though it were fact, the same thing the creationists predicted from the creation model all along ~ No transitional fossils would be found - because they never did exist in the first place.

Some evolutionists did still use Darwin or the fossil record as evidence of their theory in the '90's, but these are like stubborn and closed minded old country doctors who have not kept up with the latest developments of science.

Then there are those who cannot even consider the possibility that there is a creator God. Some of these scientists are so biased that they cannot or will not, see how much better all the scientific data fits the creation model of origins as opposed to the evolution model.

*Archaeopteryx, a star attraction "link" between reptile and bird has been refuted

Read: "Fossil remains claimed to be of two crow-sized birds 75 million years older than Archaeopteryx have been found...a paleontologist at Texas Tech University, who found the fossils, says they have advanced avian features. ...tend to confirm what many paleontologists have long suspected, that Archaeopteryx is not on the direct line to modern birds." Nature Magazine, Vol. 322, p677,  in 1986

"Lucy" (Australopithecus) ~ Not Early Human After All

Australopithecus or "Lucy", another big star to the evolutionists' stage show, is now discarded by many evolutionists. The people who discover Lucy in the first place, the Leakey's themselves never believed Lucy had anything to do with the evolution of humans. With good reason, they considered it just an extinct ape. Lucy stood three feet tall, had arms that hung down to the ankles and had a brain one third the size of humans.

Adrienne Zihlman, U.C. Santa Cruze, said, "Zihlman compares 'Lucy' to the pigmy chimpanzee, one of the oldest hominid fossils known, and finds the similarities striking. They are almost identical in body size, in stature and in brain size...indicates that pygmy chimps use their limbs much the same way Lucy did." Science News, Vol. 123, Feb. 5, 1983, p89

For the most part, knowledgeable evolutionists buried most of Darwin's theory in the waste bin, over 20 years ago. Yet, they still cling to a few  like "extended time periods" (could that be 'yawm'? - days?)

Evolutionists Have Faith - in Time!

Modern evolutionists must still have faith (atheists have faith?) - that given long enough periods of time, frogs would evolve into handsome princes.

Today they just can't explain how!

But given enough time, according to their faith, IMPOSSIBLE becomes PROBABLE!
What today's evolutionist illusionists lack for hard proof in the fossil record - they make up for in blind faith like a magic spell called ~ time!

Allah could have Created the entire universe and everything in it by a simple command ~ "Kun, Faya Kun!" (Be - and it is).

But did you ever think maybe, when Allah Created the universe in six days [Arabic: yom ~ Hebrew: yawm] - Maybe He was just taking His Time?

#5 YUSUF ESTES 2013-04-30 08:24
Salam alaykum (Peace).
It so funny (strange). When a believer says, 'God brought all life out of water. Then he created mankind from the earth (mud, clay or dirt)..' This is all in the Quran.
But the atheist says, 'No way! This is stupid! This is NOT SCIENCE'
However, when an atheist scientist says, '45 billion years ago, water covered the earth and it began to produce micro-organisms that were the first life on the planet. From these came aquatic life, which evolved into reptiles, which evolved into mammals, which evolved into apes, then to homo-erectus and then to homo-sapiens and finally to us humans today..'
Now the same atheist says, 'Now THAT IS SCIENCE, and I totally accept it all - without any further research'
What do we say, 'Laa elah ilallah, Muhammadar Rasoolullah'
'You do not guide the one you love, but it is Allah Who Guides whomever He Wills to the straight path.'
Give them this website: www.ScienceISLAM.com
http://islamnewsroom.com/news-we-need/2065
#4 Nadira 2013-04-16 16:39
Jo Jo and Ben Slater please read the Quran. If evolution was true, then why do apes still exist? Think about it... Humans were created from mud. The first human was Adam. Once you read the Quran, inshallah everything will become clearer and easier for you
#3 Jo Jo 2013-04-03 01:57
where did Man come from and where is the evidence please.
#2 Abdullah E. 2013-04-02 08:13
Dear Ben, please read this story agoin and be sure you understand who is being quoted and what they are saying. This does not totally disprove evolution within species. It seems to me the whole thing is about proving there is something going on in the creation whereby some things are changing in unexplainable ways._Also the idea that scientists are coming up with now (everything happening real quick) gives credibility to what the majority of humans have believe in since before writen word started - there was something amazing took place in a relatively short period of time._I am finding some new outlook myself and encourage you to bring your friends to chats on the Islamic chatroom where they havveschools in the chatrooms with the teachers live. www.ChatIslam.com
#1 Ben Slater 2013-04-02 07:59
this is too much because it is not what they taught us about it in school and theerefore it is lies
these people dont nkow what they are talking about
my science teacher explainged it better than this and you nedd to go back to scholl if you ever went in the first place at all
im shoking to this
Refresh comments list
RSS feed for comments to this post