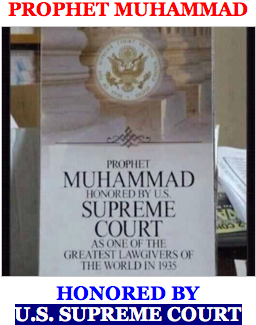 The United States Supreme Court once ruled that = Prophet Muhammad, peace be upon him, was one of the most influencial of all Law Givers in the history of the world.

That's right, the same supreme court that has recently been heariing testimony about the world's fastest growing religion - ISLAM - as being a terrorist cult and promotes violence, terrorism and is against freedom and democracy. 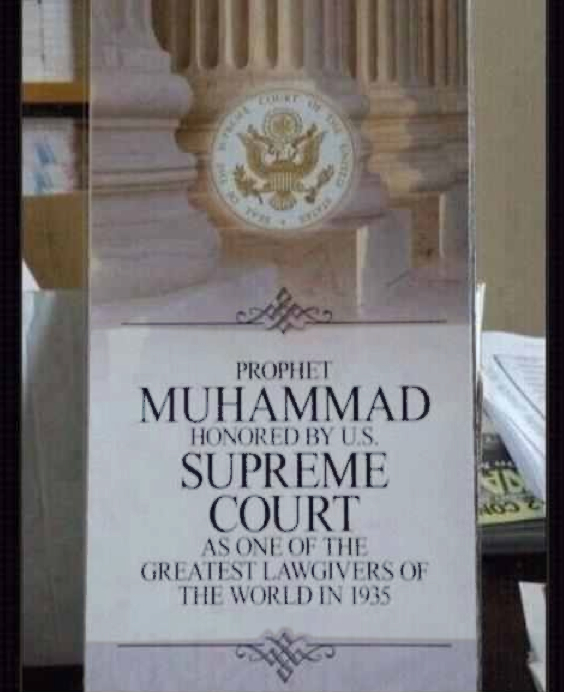 And the same court once made up of people who once proclaimed openly, Muhammad (peace be upon him) to the of the greatest men ever lived. [click]

How could this be?

It was actually back in 1935, back when the news reporters were a bit more responsible in verifying their sources of information and also a bit less prejudiced (at least toward religions). At that time Islam was seen as a middle eastern religion and not much of a threat to the Judao-Christian faith here in America.

Today we are even seeing vilolations of our own constitution by the very people who took their oath of office, swearing to uphold the very same rights of the people they now persecute with their unwarranted hatred.

Check it out and see for yourself how things have 'changed' and attitutudes have been severely altered and modified to adjust to the popular vote, so to speak.

What is next? Will they take away our rights to speak the truth (lies are ok, so why not the truth?) and what about the right to bear arms? Will they try to control the right to have fire arms? Oh wait, never mind, they are already doing that.

What's next after this? Will they tell us how to dress nor not dress (hijab? niqab? long robes?)

Let's do our best to get the correct message of the real Islam out there. That is what is missing. There is no real voice telling Americans  - What is Islam? & Who are the real Muslims?

EXTRA: What Is Your State Planning About Shar'ah Law? - Find Out

Line Up of Bans on Shari'ah Law - State by State
- Source: Gavel to Gavel

- Article: Bans on Court Use of Shari'ah International Law

What to watch for - Law & Court Decisions of Other Nations; Specifically Prohibiting Use of Foreign Law (read: Shari'ah)

This year’s batch of bans of sharia/international law use by state courts looks very different than those of the past several years.

b) that bans on references to the law and court decisions of other nations would make the judicial determinations of tribal courts in the U.S. enforceable, most such bills have been completely rewritten.

Specifically, most now specify the prohibition on the use of foreign law/sharia

Even with these modifications, as in the past, most such bills are failing to advance in the legislatures.