Congratulations For All Who
Sacrificed for Peace in Palestine 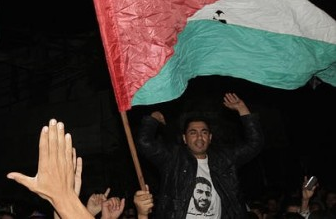 We Pray for Continued Success

We all saw in on CNN - Clear words for all the world to see: "Netanyahu must face the realty of new borders"

Suddenly, it all happend. Just hours ago, Obama was visiting in Asia, he called upon Hilary Clinton to drop everything and get herself over to Jerusalem. It was happening and America had to be there!

Here's what just came in hours ago from Gaza - -

Hamas government announced November 22 as a national holiday marking the "triumph" of the Palestinian factions in Israeli military operation on the Gaza Strip "Pillar of Defense."

As the truce took effect at 9:00 PM Wednesday evening, Palestinians from the Gaza Strip and the West Bank celebrated together the Palestinian triumph over Israelis in the last escalation between Hamas and Israel in the Gaza Strip.

Mosques' loudspeakers in Gaza blared: "Allahu Akbar, (God is greatest), dear people of Gaza you won. You have broken the arrogance of the Jews."

There is more coming in by the hour. So, check back (and leave some great comments too)