-- by yusuf estes
Bismillah - Salam alaykum (peace to all who seek truth):
Muslims - You can defend the integrity of Muhammad, peace be upon him - Read this & TAKE ACTION NOW!
1. Are you in a big hurry? No time to read all this? OK Just go here right now (quick) come back later {CLICK NOW}

2. YOU DO HAVE TIME NOW & YOU'RE READ TO GO NOW! OK GREAT! But still go watch this movie then come back to read what to do: {CLICK HERE}
www.tubeislam.com/video/11623/

Dear Muslims, I love you all for the sake of Allah & I want us all to be in Paradise with our beloved prophet Muhammad, peace be upon him.

We can use FACEBOOK, TWITTER, Blogs, Forums, Text Messages and all our emails to put this video in every home in American and around the world.

Many countries have very open anti-Islam and anti-Muhammad actions going on these days. Look in any newspaper, TV or listen to the radio. You'll see real bad things against Islam, and our prophet Muhammad, peace be upon him,
Now look at this video and see 15 famous scholars saying the truth and showing respect and honor for Muhammad, peace be upon him:
Doctor William Draper, Philip K. Hitti, Thomas Carlyle, Mahatma Gandhi, Edward Gibbon and Simon Oakley, Reverend Bosworth Smith, Gibbon (Decline and Fall of the Roman Empire), De Lacy O'Leary, Sir George Bernard Shaw (1936),  Michael Hart (1978),  W. Montgomery Watt (1953),  Washington Irving, James Michener (1955), Lawrence E. Browne (1944), Alphonse de LaMartaine (1854),
Read this quote, "Philosopher, Orator, Apostle, Legislator, Conqueror of Ideas, Restorer of Rational beliefs, founder of 20 terrestrial empires and one spiritual empire . . that was Muhammad (peace be upon him)
We may well ask, "Was there ever any man greater than he?" - Alphonse de LaMaratine (1854)
Compare what these famous men said and compare to what we see today on the Internet, TV, radio, newspapers and even from preachers in some churches about the exact same man.
CLICK HERE - IF VIDEO DOES NOT START 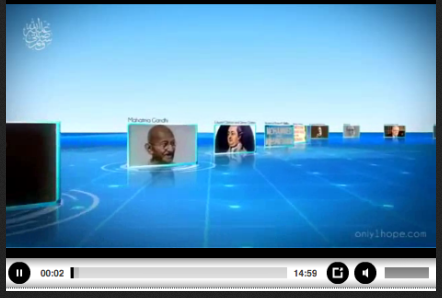 DO YOU WANT TO SEE CHANGE FOR THE BETTER? ARE YOU READY TO HELP SHOW THE TRUTH (To Muslims & Non-Muslims)?
Just share the link to this video "Innocence of Muhammad" and email to every person you know (or even those you don't know)
Don't send people to YouTube - bring them to Islam!
Here is the link on our website: www.tubeislam.com/video/11623/Innocence-of-Muhammad
Now ask yourself - "What did I do for our prophet Muhammad? peace be upon him."
But even more important, ask yourself - "What will I do right now?"

#3 Yusuf Estes 2013-08-07 03:54
I love this video so much - I put it on our TV channel and on our website for the prophet, peace be upon him:
www.ProphetOfIslam.com
#2 Pure Muslim 2012-11-09 22:26
My question : Assume Hitler had realised his mistake and had reverted to Islam to save his soul in the hereafter, would Allah forgive his all previous sins !? Prophet Muhammad (saw) said:
#1 sk 2012-09-29 08:12
innocence of muslims was dubbed over 14 minutes of desert warriors. this was planned. america & israel are looking for a reason to bomb iran.
france has anti- muhammed activity because france has made holocaust denial illegal. they could care less about muslims. france protects it right to hate speech. boycott france also, includes no tour visits to france & pull money out of french banks.
Refresh comments list
RSS feed for comments to this post