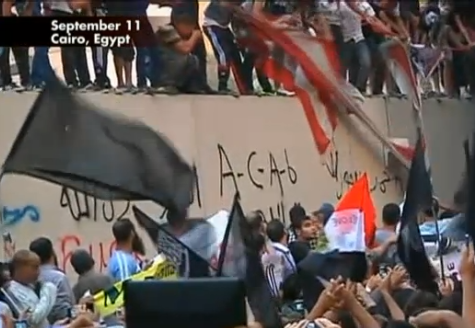 Attacks, Burnings & Killings
Is It Really Worse Than 9/11?

U.S.Ambassador to Libya J. Christopher Stevens
Killed Along with 3 Others During Protests & Riots September, 2012 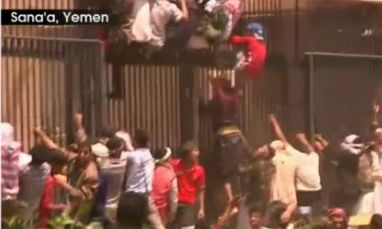 List goes on and there appears to be no end in sight.

Muslims say, "America is behind this . ."

News commentators say, "Al Qaida is the one" 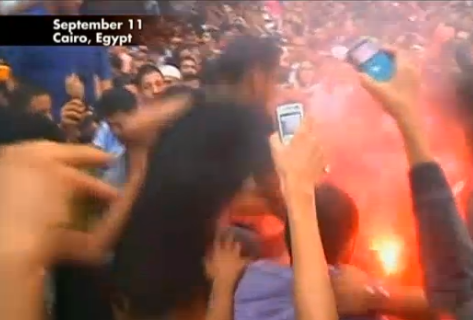 U.S. Colonel says, "Salafis are the worst of Islamic groups - and all should be killed.."

But who is really behind all of this?
(really?)

The United States offered to send in the Marines as addional security measure, here at Sundan's capital in Khartoum. 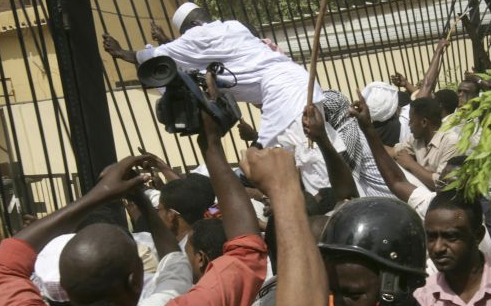 All the while clashes are taking place between protestors, demonstrators and police.

Foreign Minister Ali Ahmed Al Karti told reporters of SUNA, the news agency in Sundan, "We are most able to protect diplomatic missions in Khartoum and our state is totally committed to protecting our guests in diplomatic corps."

Al Karti's announcement of rejection of U.S. troops comes just after the U.S. said they were, "Sending in the Marines.." aas a means to firm up security measures within and around the U.S. Embassy there in Khartoum, Sundan's capital city.

Reports of gunfire from police and security guards during recent demonstrations around U.S. Embassy have some counsel officials concerned, especially after seeing protestors actually scaling up the walls of the compound area.

Troop deployment of U.S. Marines appears to have been postponed, at least for the time being, says one U.S. official, who spoke about this subject, although he was not authorized to give any details on troops movements.

Victoria Nuland, spokeswoman for the U.S. State Department says Sudan's government has "recommited to both public and private continuation of protection" for their mission, according to obligations under Vienna Convention. 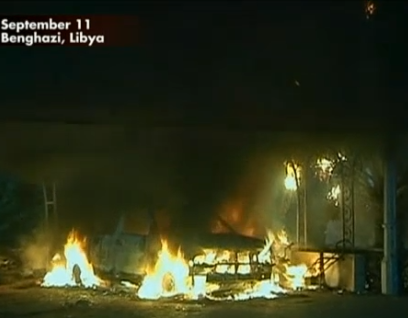 "We have requested additional security precautions as a result of … damage to our embassy,” she said. “We are continuing to monitor the situation closely to ensure we have what we need to protect our people and facility."

The State Department ordered the departure of all family members and non-essential U.S. government personnel from posts in Sudan and Tunisia and issued travel warnings to the two countries due to security concerns over anti-American violence.

The department said while Sudan's government has taken steps to limit the activities of terrorist groups, some remain there and have threatened to attack Western interests. The terrorist threat level remains critical.

The State Department said the airport in Tunis was open and it encouraged all U.S. citizens to depart by commercial air. It said Americans in Tunisia should use extreme caution and avoid demonstrations. 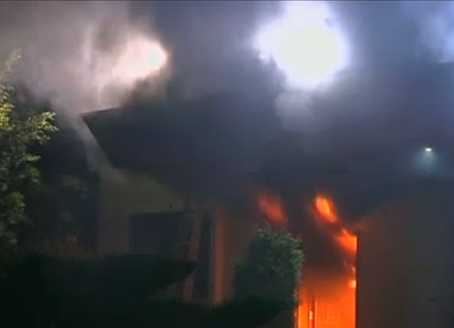 Demonstrators in Sudan stormed the German Embassy before moving on in buses to the U.S. Embassy, where police also reportedly used tear gas to stop them from scaling the walls. The protests reportedly are related to demonstrations across the Muslim world against an anti-Islam film.

The Marine unit, known as a fleet anti-terrorism security team, was to be sent as a precautionary measure, officials said.

Similar teams were sent to Libya on Wednesday after the attack that killed U.S. Ambassador Christopher Stevens and three other Americans in Benghazi, and to Yemen on Friday.

The Marines are in Yemen to deal with the aftermath of another attack on the U.S. Embassy in the capital city of Sanaa. They arrived in addition to an earlier contingent dispatched to Tripoli.

Little repeated Saturday that a Marine platoon has been deployed to Tripoli but corrected his statement Thursday that a Marine security detachment was at the U.S. Embassy in Tripoli on the day of the attack in Benghazi.

“I wanted to correct the record as soon as I learned that my statement was inaccurate,” he said. “I apologize for this error and any confusion it may have caused.” 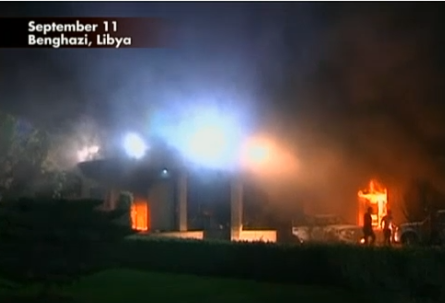 Protestors reportedly jumped over U.S. Embassy walls in both Sudan and Tunisia. At least three people have been reported dead and another 28 have been wounded during the Tunisia attack. And protesters set fire to trees and broke windows inside the U.S. Embassy compound in Tunis, according to Reuters.

A senior U.S. official told Fox News that Tunisian security forces "have responded effectively" so far to the incident.

That is just a snapshot of the violent unrest playing out Friday, in the widest protests yet across the Muslim world.

The day of protests, which spread to around 20 countries, started small and mostly peacefully in countries such as Indonesia, Malaysia, India, Afghanistan and Pakistan. The most violent demonstrations took place in the Middle East. In many places, only a few hundred took to the streets, mostly ultraconservative Islamists -- but the mood was often furious.

One protester was killed in the northern Lebanese city of Tripoli in clashes with security forces, after a crowd of protesters set fire to a KFC and a Hardee's restaurant. Protesters hurled stones and glass at police in a furious melee that left 25 people wounded, 18 of them police.

Security forces in Egypt and Yemen fired tear gas and clashed with protesters to keep them away from U.S. embassies. And Germany's Foreign Minister says the country's embassy in the Sudanese capital of Khartoum was set partially on fire.

A senior State Department official said Friday that the administration has stood up a 24-hour "monitoring team to insure appropriate coordination." The official said the team is working with missions around the world "to protect American citizens."

The intense demonstrations, purportedly by people upset over an anti-Islam film, follow warnings by the State Department that the protests could spread across the region. The department, on its Twitter account, cautioned Thursday of sustained protests in Egypt, Oman and Jordan, among other places.

The Department of Homeland Security and the FBI also issued a joint intelligence bulletin warning that the violent outrage aimed at U.S. embassies could be spread to America by extremist groups.

In a statement to Fox News, a DHS official said that there is no specific, credible information at this time to indicate that the attacks have increased the threat of violent reaction in the U.S., but it will continue to identify potential threats and take appropriate measures.

COMMENTS
You Type - We Print
(after review)
1 click only please

#8 kathy 2012-10-03 05:57
DID CHRISTOPHER STEVENS REALLY DIE AT THE HANDS OF A DISGRUNTLED MUSLIM
READ THE ARTICLE WHICH IS PROBABLY NOW ARCHIVED BY MR.DUFF ON THE PROPHET MOHAMMED MOVIE
THERE WERE MORE PEOPLE INVOLVED IN THIS THEN YOU MAY THINK
AND THERE IS BIG QUESTION REGARDING IF A MUSLIM REALLY KILLED STEVENS
#7 FATIMA YOLANDA CANOZA 2012-09-28 07:04
assalamualaikum muslim brothers and sisters worldwide just a piece of advice THIS IS THE BEST TIME FOR US TO BECOME MORE PATIENCE AND INVOKE ALLAH THE ALMIGHTY OFFER MORE DUAS THAT THIS PEOPLE WHO ARE ENJOYING CREATING BAD IMAGE ON THE MUSLIM WORLD ESPECIALLY TO OUR BELOVED PROPHETpbuh AND TO OUR DEEN WILL SEE THE TRUTH AND BE GUIDED INSHAALLAH. GOOD WILL ALWAYS PREVAIL ALLAHswt SEES EVERYTHING AND WILL AWARE OF WHATS HAPPENING.THE UNBELIEVERS WILL SOON REAP WHAT THEY USED TO DO
#6 HERU NURHAYADI 2012-09-19 00:21
the problem is the non muslim world behave what they like including insulting yesus has no meaning or consequences in the bible. they said God is death, yesus reflected in any shape of idol (white man, china or african with minimum clothes). they can say anything to other religion. they dont know that muslims over the world always give their respect to all prophet sent by Allah especially Muhammad PBUH. it is stated in quran how give our respect to our beloved prophet. the name of Muhammad is always said beside the name of ALlah. all muslims has no intention to insult any other God from other religion because it is forbidden by quran. that is why if other people from other religion insulted any of the prophet especially Muhammad PBUH you will be facing the angry of the all the muslim of the world. but the murder of the ambassodor is not allowed to. so dont do stupid thing to the muslim world. we just invite you to worship to the only truly God the almighty. if you dont like it is your choice. and according to quran if you believe, you will be in hell fire after this live.__regards_ Heru Nurhayadi
#5 Eve 2012-09-18 03:58
Asalaam Alaikum, I am still at a loss at what is all going on, but I cannot believe the audacity of anyone making fun of any of the Prophets of allah. May allah forgive any ignrance and those who truely repent and may allah, the creator of the heavens and the earth have mercy on our souls. We come from Allah and our return is back to him. May we return to him in a way that is pleasing and acceptable.
Sincerely
Eve
#4 Yusuf Estes 2012-09-18 03:05
You are right. And we have a better way. Just click the PREV link below and do it again on the next page,inshallah.
Get all the CONTACT INFO for:
Google YouTube & ICANN (free)
#3 DennisKalita 2012-09-17 10:27
Let me preface a question as regards the heart of Islam with the following: The moronic film made by an isolated character reminds me of a single anti-Islam Dutch cartoon, penned by a non-Semite, which led Iran to launch an Anti-Jewish cartoon contest. In both instances, we see a massive virulent response based on the actions of an individual, for better and worse, exercising free speech. Here’s a related question about Islamic idol-worship. Mohammed did not want his image to be worshipped. He wanted to point directly to God. Does Islam point to God or to itself as an effective idol? If Mohammed said not to worship idols, are Muslims worshipping “Islam” as an idol or worshipping imageless God? If someone has a devout relationship to a saint, sheikh, rebbe, guru or teacher is that a heinous offense to an all-loving God? Is that not better than going berserk and killing people for the mindless infraction of a few remote, ignorant people? Did Mohammed intend for mobs of people to go murderously berserk should anyone create an image of The Prophet or did he more benignly intend to have people directly worship the formless Divine? Are all these ostensible Muslims truly following the words of Mohammed or are they infidels worshipping the idol of religion? Which is it and does Islam or The Sacred have anything to do with this mass violence?
#2 samira 2012-09-16 22:18
Killling someone else that has nothing to do with the problem is sin in islam, so even if we muslims should demonstrate we have to do it in a gentle way not making drama and killing innocent (in the case) peopla. if we muslims expect that the kafers should not judge our religion becaouse of our (muslims) deeds then how can we (muslims) judge a whole country (amerikans) only becaouse of 2 people ( the men who maked the film). so in my opinion we should raise our voice and demonstrate but we have no right become aggressive and go over the limits and attack people that has no part in the case and has been as much far from the case as we muslims. Allah dose not love those who goes over limits, and the prophets s was always a gentle man ...
#1 Maryam 2012-09-16 11:41
Truly,This is a heart-wrenching news for everyone._I wonder who have insulted Islam more, the film or the reaction of Muslim World? What have We gained? With our hands stained with blood, and damaged property of our own. Where will it take us? It will take us No where neither in this World nor in the End. Why Why why did this happened? My heart cries for all those officials who were killed in the line of duty. Your lives were valuable. Your deaths were unreasonable and you will always be remembered. Truly,They are an irreparable and an irrevocable lost to the World.
Refresh comments list
RSS feed for comments to this post