Can Muslims Use Shortcuts Like:
PBUH? SWT? SAWS? JAK?

We see it is very important to pronouce these words upon saying the name of our prophet, peace be upon him. There is also rewards for saying this and especially making dua for him, peace be upon him, as much as you can on many occassions, such as Fridays.
But is it mandatory to say it each and every time we here the name of our prophet Muhammad, peace be upon him?
No. But for sure, I don't want to take a chance and for sure, I need all the rewards I can get, inshallah.
Does this have to be in Arabic?
Here is what we found from scholars about this topic ~
According to scholars, it is better to say, "Muhammad, salallahu alayhi was salam" and then you can say, "Peace be upon him" to take the most reward and avoid falling into the category of those who are mentioned by the angel Jibril, to be cursed.
However, if someone only translates it as, "Muhammad, peace be upon him" this should be no problem and could still have rewards with Allah.
But just typing four letters PBUH (for Peace Be Upon Him), certainly does not show much respect or care for on the part of the one who is too lazy or uneducated to know the words.
Some knowledgeable Muslims have made efforts to always spell it out and make sure anyone whether Muslim or non-Muslim, knew what we were saying and what we mean, and how important it is for us to say this.

Consider this, someone who is reading a forwarded copy of an email comes across this statement, "The Prophet PBUH, said..." Now they are going to think there is some prophet named PBUH and try to pronounce it - "Pebooh" or "PaBU".
What about saying "SAWS" after the prophet's name? Or when referring to him indirectly?
Actually, there is no such thing in Arabic as "SAWS".
Imagine someone writes, "When the prophet (SAWS) said...."
Now someone could think there is a prophet named "saws".
This is a very sad innovation for the lazy, internet Muslims who think it is OK to do this. I do not like it, but it is an abbreviation of "Salallahu Alayhim Wa Salam"

Also, when Muslims are talking about Allah, The Exalted, The Majestic and Sublime and they just type, "ASWT".
This is the transliteration of "Allah Subhannah WaTa'ala" as "ASWT". Some people will type the word "Allah" and then put "SWT" as though this is better.
But the non-Muslim thinks you are talking about some new "god" named "Allah swat". Aouthubillah.
The fact is, all of this is transliteration using the English letters to represent the Arabic, and then taking the first letter to represent the word that the Muslim is too lazy to type or he doesn't know how to spell.
Now look at the long email names Muslims use, for example: [email protected]_islamicinternational.co.uk
We all know someone has to memorize and type each and every one of those 65 letters & characters exactly right, every time. And this is also true of any other email they have to send to. You cannot miss a single letter or character, right?

Yet, when it comes to get the reward for saying "salams" on the prophet, peace be upon him, or for exalting the Greatness of Allah subhannah wa Ta'alah, seems Muslims don't want the rewards, and worse, do not even take the time to find out if this is even acceptable in Islam.
What is worse, is how many of our would-be scholars of today, do exactly the same thing, or even worse because they do not really know English and think it is OK to do this practice.
For me - I would not like to do it, I don't like to read it and I don't like to publish it. But so many people have done it in so many places, it seems hardly worth it, when there are so many others areas we are worrying about right now.
And what about "786"? What is this? (Borrowed from the HINDUS) - It's 'Shirk'!

The numbers 7-8-6 as we see them being used today, come mostly from India and Pakistan. But now unfortunately, other Muslims have begun to use this term as well.
They claim it represents the "Bismillah Rahman Raheem". However, there is no real evidence for this from Islam or the Arabic and of course there is clear evidence the Hindus came up with this.
It could be something in Urdu, but even that was not done by earlier scholars. In fact, some of the real scholars from these areas have told us, Muslims must not do these things.
Bottom line - If you are too tired or busy to type out the words, maybe you should disconnect from the Internet and come back when you have more time. At least enough time to type out your correct email address and the expressions related to our "God" (Allah Subhannah wa Ta'ala) Exalted and Majestic is He, and His Messenger (Salallahu alayhe was salam) peace be upon him. 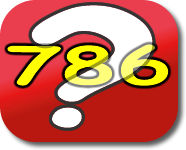 P.S. I do know many of the writers of aritcles on our websites have used these abbreviations, but that still does not mean we like it, or endorse it.
Also: What about the numbers "786"? Do you think it is haram? Halal? Or what?
May Allah Al Ghafur, Ar-Raheem (The Forgiver, The Merciful) Forgive us and grant us all Mercy from Him, ameen.