See for Yourself (video)

It was the last day for Yusuf Estes in German, and the local burger miester (mayor in English) decided to cancel the auditorium even though the Muslims had already paid for it in advance (they tried to get the money back later, but then the court fined them another 2000 dollars just for asking).

The Muslims had to stand outside the auditorium holding signs to tell everyone where the new location was going to be - even Sheikh Yusuf was on hand, holding up signs and trying to tell them (in English) where the new site was.

Even so, the building was so crowded (you can see it in the video) that no more people could even get in to sit down. Others were standing up for the program.

The program was in English and translated by Pierre Vogel to German language. Everyone enjoyed the humor and straight forward approach used by there scholars. It was really a great program.

Then at the end, the presenters asked the crowd of about 1,300 people if anyone would like to enter Islam. Immediately a young many came up to the stage and entered Islam (see it on the video) and then Sheikh Yusuf Estes asked Pierre Vogel to ask the crowd if anyone else would like to become a Muslim - sure enough, another one came up on the stage.
And then another and another, one by one they came.

Finally, when some women came up to accept Islam - the time was running out - and they asked the entire crowd - "Whoever wants to become a Muslim, STAND UP and make the shahadah"
- And they did ~ Almost all of the ENTIRE ROOM (1,250) stood up for the shahadah! 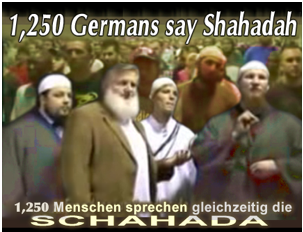 Yusuf Estes told Pierre Vogel, "Tell them to SIT DOWN, if they are not sure or if they are not ready to become full, practicing Muslims"
About 50 people sat back down, including the close relatives of Pierre Vogel. It broke their hearts to see their loved ones sit down and not make the shahadah. But after all, there is no benefit in getting someone to say it, if they don't really mean it.

While on the one hand, it was a sad moment for Pierre Vogel, at the same time he was so happy to give shahadah to so many of his fellow countrymen.

You can enjoy watching and sharing this moment with your family and friends - order this DVD online right now. Inshallah, all funds donated will go to help others learn the truth about the world's fastest growing religion - ISLAM.
ORDER DVD HERE
https://www.shareislam.com/order/product_info.php?products_id=69