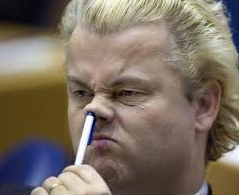 or Freedom to Lie?

STOP! - After we published this article in October 10, 2010
Something amazing happened to Geert Wilder's Partner, Arnoud (HE BECAME A MUSLIM)
But that's not all - (HIS SON ENTERED ISLAM TOO)!
READ . . .

"Freedom Of Speech Is NOT Carte Blanche To Lie, Slander And Defame"
Karl Schwarz 8/4/2008
Right now, Today - we see what Allah does even though we might feel helpless. This is Allah's religion and He does as He wills. Allahu Akbar!
Islam and Muslims are under attack, and not only in Germany, but around the world. A trial was condutcted to decide whether or not Mr. Geert Wilders could continue to lie against Muslims and their way of life and to destroy the very fabric of Islam by imposing limits against Muslims and laws against Islam.
He came to the U.S. promoting his angry agenda of hate and vengence toward Muslims here.
This came at a time when U.S. was proposing laws against speaking publicly about 9/111 conspiracies or similar events.
Guess what Allah did to Geert Wilders, his partner Arnoud and his son?! (READ)

FREEDOM - On Trial
Freedom of Speech Or Freedom to Lie?
-- by Yusuf Estes

Geert Wilders, a politician in German (*Netherlands not Germany - correction made Feb. 13, 2011), has used his high position to demonize an entire nation of people who follow the religion of Islam. Muslims are being presented in the media to the public by someone in authority - as demons, dangerous and even devils on earth.

Is this behavior acceptable? Or not?

Where are the limits? Who speaks for Islam on these most insidious and slanderous public attacks against one of the two largest religions on earth?

What are the dangers of inciting over one and a half billion people around the world to riot-like mentality, just to gain politcal clout amongst a few openly prejudiced supporters?

Naturally, we all insist on the need for "free speech" - or at least the freedom to openly critisize things which could be harmful or damaging to ourselves or others. About this there can be no doubt.
At the same time though, what about the freedom to say things that are absolutely not true, things that damage the public good and even cause riots in the streets?

Geert Wilders, as well as his opponents, must have the right to speak out against oppression, chaos, terrorism and destructive elements in our society. This helps keep the balance and protects the average person from the ultimate oppression of total dictatorship.

But still, where do we stop the one speaking? Or do we put any limits on these people at all?

When someone in authority or high position uses his influence to promote his own agenda at the expence of damaging and destoying the life style of others - is that also "Freedom of Speech"?

When people knowning say things not true - outright lie, and knowingly cause serious restictions on other people's right to live in peace and harmony with their community - is that "Freedom of Speech"?

Granted, public figures must have the right to speak out - that is expected of them and is in many cases necessary to preform their duty.

But when do we say - "This is too much" or tell them "You have gone too far"?

When someone in high position, like Geert Wilders, compares Islam to the the Nazi regime, a government intended to make racism and hatred of anyone who adheres to a certain religion - an acceptable practice - even killing millions of innocent Jews, is this really acceptable?

Or in fact, isn't this exactly what will lead up to a form of government like the Nazis?

Open debates in public arenas with respectable scholars offering opinions based on established facts and reliable information, have always been a part of the ongoing studies of true Muslims for over 1,400 years. This is a fact.

But when someone who is either ignorant, prejudiced or downright hateful, promotes a racist posture against a group of people without any intellegent evidence, in fact, totally against established proofs, then is this acceptable as well?

There are some journalists who even pretend to represent the mass majority in their twisted claims, supporting such behavior as though it were necessary to keep the needed balance for open discussion.

But this does not address the need for public discussions and debates to include an honest represenation of reliable informaiton and not the ravings of a lunatic or power mad individual or group who throw truth to the wind and proceed with their false statements and damaging influence without any checks or balance.

Those who would claim that limiting influencial speakers in authority to present at least some reasonable evidence for their statements, is taking us down the road to antidemocracy, are not being honest themselves. For they know that unbridled hatred and prejudice based on lies and twisted thinking can only bring about chaos and undo centuries of buidling within our society and lay to waste the lives of those who gave the ultimate sacrifice to protect and defend the freedom to TRUE speech.

Others try to influence the general public, claiming to stop people like Geert from their hateful, racist attacks of Muslims or any religion will gag or even eliminate anyone with authority who might be condemning an enemy o the people - somehow ignore the fact, that allowing this unfounded, destructive behavior, by a trusted representative of the people is exactly the very thing they are promoting themselves.

The OIC (Organization of Islamic Conference) is making efforts to bring about awareness of these most despicable and cowardly attacks against miiions of innocent men and women and children scattered around the globe, who happen to believe in the One God of Adam, Abraham, Moses, David, Solomon, Jesus Christ and Muhammad (peace be upon them all) and the way of living in submission to God's Commandments and serving ones neighbors and society - while calling to righteousness and forbidding public lewdness and oppression (like that of Mr. Geert Wilders).

Lastly, it is important to point out, that any nation or even the United Nations itself, that would declare or make it a criminal act to offer constructive, honest criticism of Muslims or their actions, is not acceptable even to Islam itself.

After all, it has always been the goal of Islam to offer the most balanced of society for both Muslims and non-Muslims to live together in peace, harmony and mutual support for all that is good and forbid each other from oppression, aggression and all that is evil.

How could such a statement be even considered as sane? Because this would mean Muslims would be allowed by the man-made governments of people like Geert Wilders the same freedom to lie, cheat, oppress and subdue by force - All of which are totally forbidden to believers by Almighty God.

May Allah guide Mr. Geert Wilders and his type, ameen.

=== Public permission to copy, distribute and post on forums, blogs, social networks like Facebook, Twitter, this article only if it is entirely presented and preserved as we have presented it above, mention www.IslamNewsroom.com. Thank you.

UPDATE - Since this article, Geert Wilder's PARTNER - Arnoud, BECAME A MUSLIM
And there's more - Around's son made shahadah with us too!
See the video: www.IslamNewsroom.com/news-we-need/2216

#3 Farah Zulkifli 2014-12-17 01:42
Alhamdulillah may we all Muslims continue our doa to keep you safe and continue to call humanity to return to the One Allah, amin. Farah
#2 disagreer 2011-02-13 05:36
You began this article with a mistake, that mr. wilders was from Germany. This is wrong, not a lie, I'm sure, but it could offend Dutch people. Does that mean you should be tried and punished lawfully?
What if he really believes this is true, and really believes that Islam as a whole is a treat to dutch society and it's people? should he be imprisoned for saying so?
in the end, the whole government, not just him (netherlands is not a dictatorship) decide on laws, so you've nothing to worry about. You don't live there and should not have a say in their government...
And about Islam, the fact is that Muslims are not actually behind so many of these terrorist attacks in the last century (less than 5%) so surely we can look to other sources for these many acts of terror and violence. Bush administration perpetrated more crimes and covered up more Black Water killings than all the suiciders in the last 6 years. As long as no one is unlawfully punished, governments like America and UK just keep getting away with it. don't you see? So get yoru facts straight.
#1 abdelaziz 2010-10-18 09:14
jazakalah ,for lighten up things but i thought that geert wilders came from the netherlands and not germant thank you
Refresh comments list
RSS feed for comments to this post