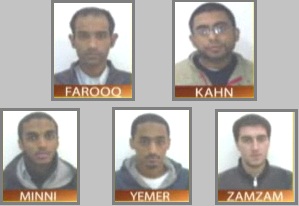 In what some have labeled a Jihad Adventure Five young men planned together to go into Pakistan and possibly into Afghanistan for what has been described by some as a "".
After viewing a video tape of one young Muslim boy accused of plotting to do "jihad", a neighborhood youth who had grown up with some of the five, had this to say,
"I don't know how these guys got into this whole thing. How could it be? They were hanging out together and one of them was going on the Internet and talking about going to Pakistan for an "adventure" and save people, etc.
Then all of a sudden they are gone. No one knows what happened to them. And then they turn up in jail in Pakistan?
And now they are being treated like terrorists.
Wow! This is too much!
I just hope others don't fall into this same kind of trap.
I tell my friends not to take their religion from a website. You go to a registered imam or someone who has real knowledge of Arabic, Quran and sunnah* if you want to know Islam".

*sunnah - the teachings of prophet Muhammad, peace be upon him.

maybe i do understood wat u trying to say or maybe i dont.

i asked u who are the terrorist?

the one who are deceived is majority of us. we believes every words that came from the media. we dont give excuses for our brothers but solely takes what was being fed.
#4 Fahad Bajawi 2010-06-25 10:16
Dear Mariam, you did not understand me, these young people deceived by terrorist groups and became a tool in their hands to achieve their ends.
#3 mariam 2010-06-25 07:28
@fahad
"Also we not forget that terrorist groups hunted these young people by jihad sites and promise them will enter the Paradise and [[ al hoor al eein]"

May i ask, who are you referring too?
The ppl who defend their land?

who do u knw that these terrorist groups hunt internet for ppl to do jihad?

same can be said for terrorist groups who lured others to do jihad wif promises of money etc and it was a step up.
#2 Fahad Bajawi 2010-06-24 11:49
Thanks for subject
In fact, most young people did not understand the true meaning of jihad, and This thing is the duty of schools and universities and mosques imams to know him.
Also we not forget that terrorist groups hunted these young people by jihad sites and promise them will enter the Paradise and [[ al hoor al eein]].
Finally, Observe your children and their cared and thanks
#1 mariam 2010-06-24 11:10
the sentence shud be "accused" to do jihad not "jihad".

Subhan Allah, when muslims want to go and help, so many questions arise,even captured and prosecuted with weak evidences.
Refresh comments list
RSS feed for comments to this post