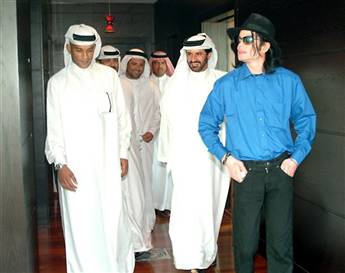 Would Michael Jackson still be alive today had he just converted to Islam?

Or did he convert secretly to Islam?

And did that have something to do with his death?

Speaking out just ahead of the first anniversary Friday of Michael’s death, Jermaine, who is a Muslim, said the religion offers the peace and clarity that his brother was so desperately seeking.

“When you are 100 percent clear in your mind as to who you are and what you are and why you are and everybody around you, then things change in a way that’s better for you,” said Jermaine. “It’s just having that strength.”

“I was the one who originally put him in Bahrain because I wanted him to get out of America because it was having a cherry-picking time on my brother.”

Jackson said his brother was not against converting to Islam.

“All of his security became Muslims because he trusted Islam, because these are people who would lay their lives down and also who were trying to be the best kind of human beings they could possibly be not for Michael Jackson, for Allah,” he said.

“So having those people around, you knew that you would be protected because it is protection from God,” he added.

Editor: But the burning question remains in the minds of many Muslims - "Did Michael convert before he died?" - (guess only Allah Knows the answer to that one)

12345
#46 Tooba Kabir 2015-05-02 04:19
i think he embraced Islam becuz his brother jermaine says that Michael loved the call of the prayer "Azaan" so the answer is clear that when a person loves Azaan he loves that belief
#45 Mahira Khan 2013-07-27 01:02
I think Michael was an innocent and kind person and he was very sensitive about the children and he always helped th poor and sick children and i hope that his this act will surely help him to go to the paradise i don't know that he was a muslim or not but the thing that i know is this that he is an honest and true person.I miss HIM so much and he is always alive in our hearts.
#44 md sakawat 2013-05-12 09:06
Allah knows best.
#43 sk 2013-04-25 07:33
wonder if any 1 else in Jackson family will convert. maybe Jermaine needs to give dawah.

why are we worried if MJ died as a muslim or not. there's nothing we can do. we should be praying that we should die in state of islam.
#42 Yusera 2013-04-24 18:05
How come some of u says that if he was muslim he wolud go to paradise...I don't think none of us has a power to determine anyones destiny Allah swt knows our destniy even as being muslim we all should need to pray and repent and be a good person inside and out...Allah is Ar-Rahman and Ar-Rahim...MAY ALLAH GUIDE ALL OF AND KEEP US TO THE RIGHT PATH AMEEN.
#41 Sady jabbie 2013-03-27 15:24
I started to love Michael Jackson when I hord that he is a muslim and still love him as a muslim "but what if wasn't a muslim?" Only god knows.
#40 David 2013-03-20 13:03
I think if he had embraced Islam it would have been reflected in his lifestyle. I see no evidence of that but as we know only Allah truly knows what is within the hearts of men. Inshallah he is in paradise but I wouldn't bet the farm on it.
#39 YUSUF 2013-03-11 12:15
we all really truly apreciate work done by Yusuf Estes and the team.
If security would not have been the problem,i would have requested Yusuf Estes to visit Pakistan.
#38 Yusuf Estes 2013-03-06 11:18
Michael Jackson may have become Muslim, there is some evidence from places I visited in UAE & Qatar. But no one is swearing they actually heard him say shahadah, nor anyone said they saw him do the salat.
If I find any solid proof, trust me, I will publish it.
But for now, we have to just trust Allah Knows Best who is real Muslims.
#37 shaz 2013-02-12 06:12
he is true mislim for sure, he even said a song with the remembrance of Allah (SWT), i love MJ very much, he is always with us, may Allah bless him
12345
Refresh comments list
RSS feed for comments to this post