About Valentine's Day -
Is it Haram? - I heard,

"OK - so Valentine's Day, birthdays, Christmas, Easter are "haram" (forbidden) to Muslims. So what? What could possibly happen if Muslims disregard teachings of Islam?"

Consider the infractions committed every day by Muslims around the world and then think about what is going on in those same places . . .

The holiday is considered haram, or forbidden by prophet, Muhammad, peace be upon him. He tells us any newly invented matter in the deen (way of Islam) is misguiding and all misguiding leads to the Fire of Hell.

Not only is it forbidden due to false worship (and act of shirk or making partners in worship with Allah) it is also one of the many ways people waste hard earned money trying to impress members of the opposite sex.While it is very much a part of Islam to regularly present our mothers and wives with gifts, it is another forbidden act to participate in adultry or anything coming close to it. 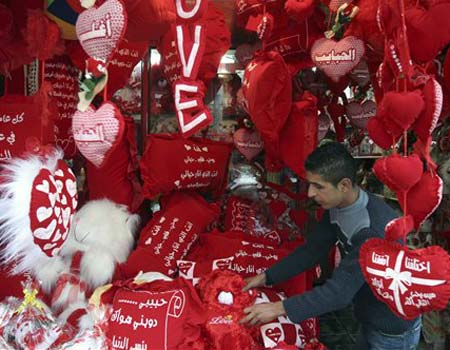 Feb. 12: A Palestinian vendor is seen in his a gift shop decorated with gifts for Valentine's Day in the West Bank city of Jenin.

Roses are hard to find in Palestine, a gift usually associated with Valentine's Day. They only grow in Israel and of course they are difficult to come by in Gaza. Still many Muslims attempt celebrating Eid Al Hub (Love Feast) with anything red they can find. Flower shops in Gaza City usually display buckets of red heart-shaped carnations and decorations, even to Muslim women wearing head scarf and long dresses.

Many officials in Muslim countries chose to endorse celebrations from the west, or at least look the other way when it comes to western influences like 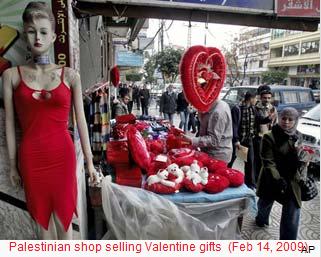 Across the Arab world, attitudes toward Valentine's Day can be a pretty good gauge for the level iman (faith). Observent Muslims know prophet Muhammad, peace be upon him, ordered believers not to follow the ways of other religions and to celebrate the two eids (festivals) of Eid Al Fitr and Eid Al Adhah.

Youth amongst our Muslims are quick to copy the folks the west, especially when it comes to celebrating their "romances" and "love".

But all of this only leads to heart break and sorrow for those unwed mothers, and "lovers" with diseases like A.I.D.S. It is not real love, rather a corrupted image with carnal desire and lust at the root. But it does make the devil happy.

Saudi Arabia has their religious police who work to make sure these types of "innovations" don't creep into the Muslim way of life. But even with a ban on these non-Islamic activities, it is difficult to enforce the ban.

Lawmakers in Kuwait said they want to see Valentine's Day suppressed because it dilutes the pure Islam and corrupts the Muslim society with false notions of what real love and marriage is all about.

Bahrain is more open to these types of celebrations, although still maintaining a watchful eye on the effects these have on society in general and the Muslim spirit and innocence expected of the youth. Even then the flower shops there import up to 150,000 of the roses in a week for the heart throb event.

Egypt used to be very conservative and still is in the country side. However, the big cities like Cairo and Alexandria have their own new cultural attitude of the you. Cario overs small cruise boats on the Nile were decorated with red ribbons and hearts made of flashing red bulbs.

Dubai, a conservative Muslim city-state with a modern outlook and a pro-Western attitude, has been taken over by a Valentine craze in recent days. Malls, cafes, and even offices were decorated with giant hearts. Five-course dinners and romantic getaways were sold out, and spas offered Valentine specials.

Valentine's Day was introduced to Gaza about a decade ago by Palestinian exiles returning from more cosmopolitan places such as Beirut and Tunis, following interim peace deals with Israel. The Internet and Arab satellite TV helped spread the idea, mostly among the young, educated, and secular.

Salesman Mohammed Sussi, 30, said he hadn't received any complaints about his business. ''They didn't tell us anything, whether from the government or anyone else, that it is haram,'' he said.

But in one flower shop, a TV crew earned angry glares from salespeople, and shoppers adamantly refused to be interviewed on camera. Asked why the reluctance, one salesman said his customers didn't want to be filmed doing something haram.

A Palestinian policeman said Valentine's Day might go against Gaza's traditions, but Hamas is not trying to replace civil with Islamic law. ''We are by nature a religious people and hate and reject all strange things,'' he said. ''(But) we don't kill adulterers or gays or cut off the hands of thieves.''

What about other innovations and falsehoods regarding Islam?