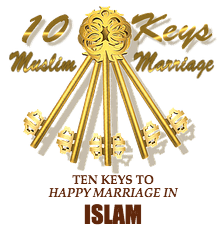 Get Facts Before Marriage

NEXT TIME - USE YOUR PHONE
SEARCH for 'BIBLE' or 'JESUS'
USE SearchForIslam APP
Now on Android!
Just Type: "searchforislam" - It's FREE

Question - "I'm frustrated waiting to find and marry a good righteous Muslimah (Muslim woman). I mean you know, to have release from the need for sex? Is there a solution for me from Islam?"
(signed), Very FRUSTRATED

Answer - Dear "Frustrated" - Islam provides essential ingredients for a man and woman to be married and to have sexual relations as man and wife. While there are many books on the subject which we recommend for all Muslims to read, we humbly offer the follow information about these ingredients, inshallah.

1st Key: The first ingredient is the "wali" (nearest relative to the lady, such as her father or brother if the father is unable to perform the task) or "wakil" (imam or appointed guardian to act on behalf of the best interests of the lady). It is his job to help find and interview the background of any potential suitor for the lady.

2nd Key: After choosing the young man, there is an appointment scheduled for the two of them to meet (under chaperoned supervision) to discuss their possible future together.

4th Key: If both of them recognized positive signs from the "salatul istakharah" then they would proceed to make the "nikah" (marriage contract). This again is done under supervision with two witnesses. It is usually attended by an imam or knowledgeable person in Islam, just so that there will be no mistakes in taking care of the details.

5th Key: The mahr (dowry) is presented and the lady is asked if she is prepared to accept this mahr and be married to this man. This is usually repeated three times in front of the witnesses, but at least one acknowledgment from the lady is necessary to proceed.

6th Key: The women would then sign the nikah document in front of the witnesses.

7th Key: The witnesses (usually two) would sign and attest that they had been present at the nikah and did witness the acceptance by the lady of the offer of marriage by the man. The imam might also sign, but this does not affect the validity of the marriage. Any two adult Muslims may witness the document. In the case of women witnesses, it is correct to have two in place of one. If there were to be two witnesses, but one is a woman, then it would be correct to have a man and two women sign the document.

8th Key: After the acceptance of the lady, the signing of the nikah (document), witnessing of the two witnesses and exchange of mahr, the man and the women are considered legal in Islam to live together and be together as man and wife and to have sex. However, until they actually consummate the marriage (i.e., have intercourse) they may cancel the marriage, and the mahr would be returned back to the man.

9th Key: After the signing of the marriage document, and the acceptance of the bride of the 'mahr' (dowry), and the signing of the two witnesses, the groom is free to take his bride at anytime he chooses. There is no waiting, if that is what you are implying. As regards any kind of a deadline, this would be according to the contract. If the lady or the gentleman has specified that for whatever reasons, if they are not able to be living together by such and such a date, then the mahr could be returned back to the man and the woman and man would be considered not married (unless of course, if they had consummated the marriage by having sex together).

10th Key: If the groom is unable or unwilling to take the bride after an extended period of time and she or he would like to annul the marriage, they would simply let the other person know and cause the mahr to be returned to the groom.

NOTE: This is all based on the fact that although they have a contract for marriage (nikah) it is not considered completed until after they consummate (have sex). Once that has happened, they are married and the only way for them to no longer be married would be through divorce (khulwa or lian or talaq).

And of course, Allah Knows Best.

Any good is from Allah the mistakes were from myself. May Allah guide all of us to His Truth, ameen.

MORE? == Visit 'marriage' on www.IslamsWomen.com (You'll fall in love with it)