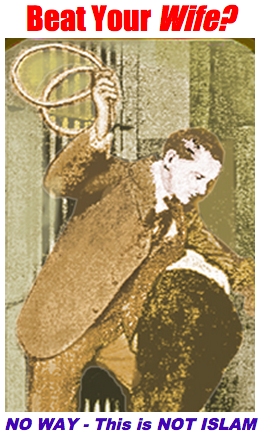 Get the Real Story BEFORE
You Make a Big Mistake

Question: Does the Quran say, "And beat your wives?" (refer to ayah #34 in Surah An-Nisa, chapter 4)

NOTE: It is a clear fact, Islam forbids any kind of oppression or violence against women (or men for that matter).
Yet, it cannot be denied that there are some Muslims who do not really follow Islam - and what is worse, there are those who try to justify their violent behavior toward women (and others) by giving incorrect interpretations to Islam's teachings.

It is necessary, therefore, for us to explore what Islam really does say about these matters and then provide proofs for the believers to bring about correct understanding and better living for all of us.

Please Read This Special Update (and share it with others right away): Islam Forbids All Forms of Oppression
The Quran orders men to "Protect and Defend - ALL WOMEN"

{..And 'dharabah' them}
Bringing light to the Treatment of Women in Islam
-- by yusuf estes

There is a word used in the Arabic that carries a much wider meaning than the word "hit" or "beat" in English. This word is often mistranslated as "beat lightly" It would be better understood as the English term "percuss" (Percuss - a light tap or thump) - an action doctors use while examining patients upper torso - light tapping while listening to their backs or chests.
(ref: explanation of surah An-Nisa, verse 34)

So many questions about treatment of women in Islam - and what Muslim men do with their wives.

What about the treatement of the women in Islam. Why does the Quran tell men to "wadhribu hunna" - "Does this mean to "beat their wives"? (chapter 4, verse 34)

Answer: No, it does not. (read this answer slowly and carefully)

Statement - before we begin with this one: The prophet of Allah, Muhammad, peace be upon him, tells us Allah has said,
"Before the creation of the universe, I forbid that I would oppress and I hate when anyone oppresses."

Let us consider a very basic understanding of the advent of Islam and the reason for it to be revealed in the time and place where it came. Here is a brief, yet clear statement of purpose with the coming of Islam:

We must keep in mind the condition of the people who were without the guidance of Almighty God and how they had strayed far away from the message that came with Adam, Abraham, Moses and other great prophets, peace be upon them all.
The ignorant and selfish mentality the prevailed throughout the Arab lands did not allow women even the most basic of rights and the treatment of women was abhorent. Women were being treated as property, even less than the status of livestock. They were offered in trade or taken in marriage without consent or consideration for their feelings at all. The customs of the people at the time were far away from anything we might imagine today.

Statements in the Quran pertaining to the treatment of the women came to improve their condition and to raise their status to a level of balance alongside of men. Islam came to change the hearts of the people and show them the proper way to worship Allah and to interact with each other.

Now let us review the proper method of providing answers for Islam in general.

First we would say, "Thank you for asking about Islam. It is our committment to try our best to provide answers to questions to the best of our ability. However, sometimes we come across questions for which we do not have answers. In this case we will refer you to others who may be able to provide you with proper answers."

Second, we remind ourselves and the one questioning Islam to be aware, we as Muslims, must never lie about anything, especially our religion.

Fourth, I would like to remind myself and all who read this in the future that not all questions are purely questions. Some contain statements and implications, that may or may not be true.

Finally, it is important to keep in mind anytime we discover something in the answers to actually be better than what we already have, we should be committed to change our position and accept that which is true over that which is false and take that which is better for that which is inferior.

After taking all of the above into consideration, if we find that the answer to this question provides us with a better approach to understanding what Almighty God has provided us with as a way of life on this earth and in the Next Life, we should then make the logical decsion to begin to worship Him on His terms.

Having said that, let us now look to the particular verse in question in the original text (Arabic), followed by the phonetic sounds in Latin letters and then finally, followed by a translation of the meaning to the English language by experts in both Arabic and in Quranic meanings.

One Explanation (tafsir) given of this surahc (chapter 4:34) according to some scholars is:
“Men are the support of women as God gives some more means than others, and because they spend of their wealth (to provide for them). So women who are virtuous are obedient to God and guard the hidden as God has guarded it. As for women who are averse in behavior, talk to them suasively, leave them alone in bed and tap them (like a doctor would tap a patient - lightly), if they open out to you, do not seek an excuse for blaming them. Surely God is sublime and great.”

Meaning of the Words
For the three words fa'izu, wahjaru, and wadribu in the original, translated here 'talk to them suasively,' 'leave them alone (in bed - fi'l-madage'),' and tap lightly (percuss them), respectively,

Fa'izu (to use persuasive speech or admonishment)
Fa'izu, implies the first step should be to make clear to them using straight talk, the position they are in and what is required to comply with the teaching of Islam. This approach may be repeated until it is established she has understood and is willing to comply and come back into line with the proper expected of a Muslim woman. (comentary provided by Yusuf Estes)

Hajara - Wahjaru (do not touch or moleste them)
Hajara, he says, means to separate body from body, and points out that the expression wahjaru hunna metaphorically means to refrain from touching or molesting them. Zamakhshari is more explicit in his Kshshaf when he says, 'do not get inside their blankets.'

Daraba (tap lightly as 'percuss', not to beat)
daraba lightly tap them (women).' This view is strengthened by the Prophet's authentic hadith found in a number of authorities, including Bukhari and Muslim:

"Could any of you beat your wife as he would a slave, and then lie with her in the evening?"
There are other traditions in Abu Da'ud, Nasa'i, Ibn Majah, Ahmad bin Hanbal and others, to the effect that he forbade the beating of any woman, saying: "Never beat God's handmaidens."

In the past, some translators of this verse have mistakeningly used the word "beat" to represent the word "dhaaraba" in Arabic. This is not the opinion of all scholars especially Raghib and Zamakhshari as mentioned above and those who are well grounded in both Islam understanding and the English language.

Quran: (Surah An-Nisaa' [The Women] 4:34)
Men are the protectors and maintainers of women, because Allah has made one of them to excel the other, and because they spend from their means (to support the women). Therefore the righteous women are devout and guard in the husband's absence what Allah orders them to guard (e.g. their chastity, their husband's property, etc.). As to those women on whose part you see ill­conduct, admonish them (first), (next), refuse to share their beds, go back to them (in intimacy), if they return to obedience and do not seek any means of annoyance against them. Certainly, Allah is Most High, Most Great.

Other translators have offered words such as, "tap" and "pat" to represent a physical type of admonisment. While definitely coming closer to what might be acceptable in many circles than such expressions as "hit" or "beat", this still does not properly demonstrate the position and usage of such terms in relation to the first of the verse and the connection to the following passage, wherein the clear instructions deal with the women who do not come into compliance. Therefore, it likely be considered to mean: "tap lightly as a doctor would examine a patient".

And Allah is the All-Knower. (commentary from Yusuf Estes)

We understand from this some of the translations are not properly representing the spirit of the meaning. Therefore, they cannot be considered to be the representation of what has been intended by Almighty God.

Now we can properly understand that Almighty God has commanded the men to provide for the women and allow them to keep all of their wealth, inheritance and income without demanding anything from them for support and maintenance. Additionally, if she should be guilty of lewd or indecent conduct, the husband is told to first, admonish her and then she should cease this lewdness. However, if she should continue in this indecency, then he should no longer share the bed with her, and this would continue for a period of time. Finally, if she would repent then he would take up sharing the bed with her again.

Dr. Jamal Badawi (St. Mary's University, Nova Scotia) is of the opinion these (three stages) are necessary steps prior to divorce. Instead of a man saying, "I divorce you" three times in a row, he should follow this procedure before acting hastily and thereby doing something unwise and displeasing to Allah. The first step would be as mentioned above, to give her a "good talking to" and then if she continued in such unpleasing behavior, to leave the bed (not have intercourse with her) for a period of time and then finally, the last straw would be to "pat" her on the arm (as you would stroke a sheep or animal) to signify to her this is the final straw and then if she still persisted in her bad way, he could divorce her. 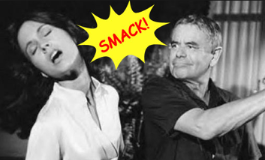 Regardless of the various positions and opinions, there is no permission established through the teachings of the Quran or the Sunnah (way) of Muhammad, peace be upon him, wherein one person could "beat" another person at their own discretion.

Any translations of the Quran indicating women can be beaten or abused by men is totally out of touch with the message of Islam from the rest of the Quran and the teachings of Muhammad, peace be upon him.

And Allah is All Knowing of the meanings of His ayahs (verses in Quran).

NOTE: The statements regarding the type of "tapping" using the word "percuss" are from Loyola Medial Education website.