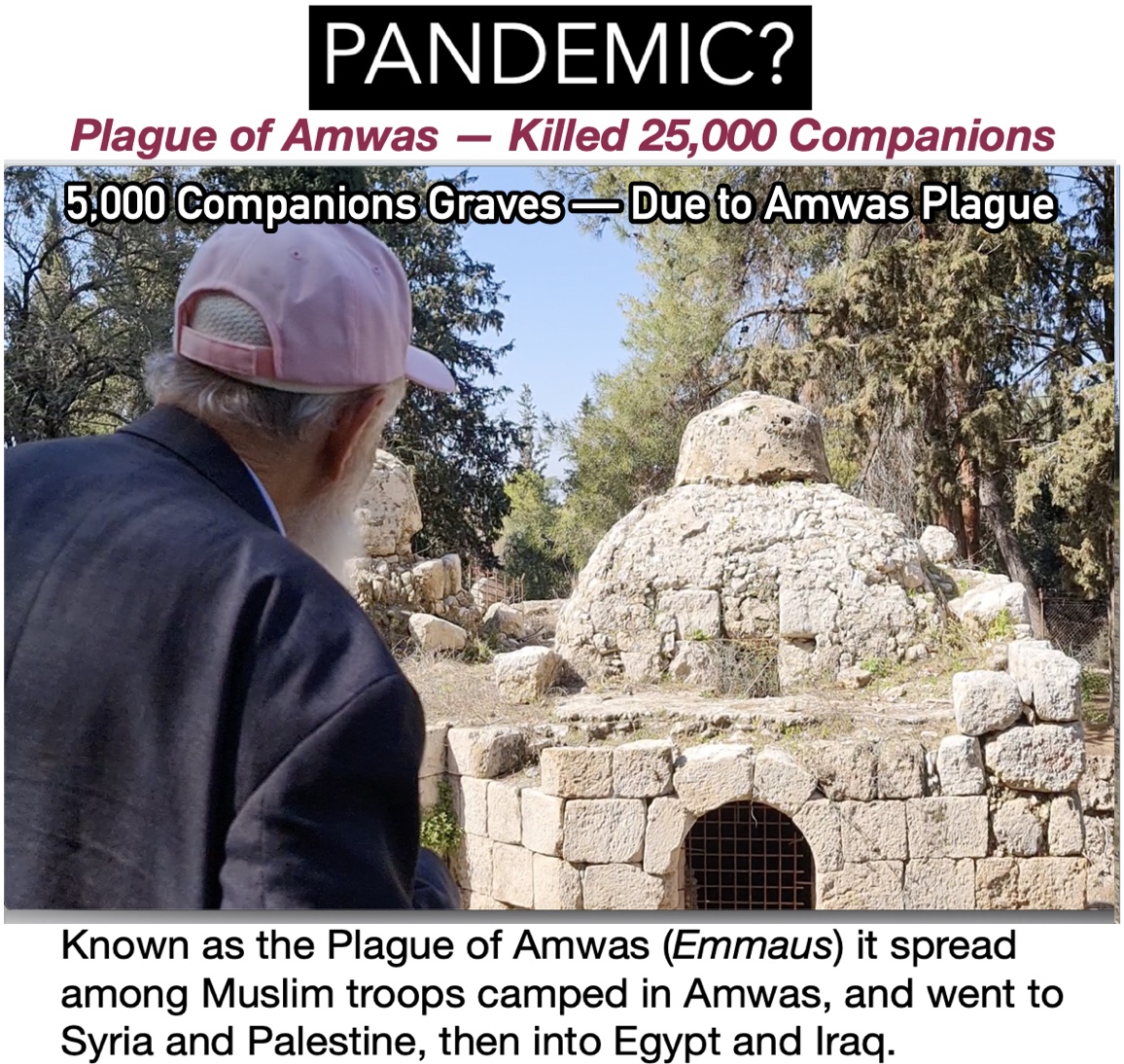 Plague of Amwas -- In Muslim history, it was the first epidemic Muslims had to deal with. Benefits from the hadith help them, and miillions of others through the centuries deal successfully with plagues, epidemics and pandemics, as well. Known as the Plague of Amwas (Emmaus) it spread among Muslim troops camped in Amwas, and went to Syria and Palestine, then into Egypt and Iraq.

The Plague of Amwas (Arabic: طاعون عمواس‎, ṭāʿūn ʿAmwās), or plague of Emmaus, Balad-as Shams [638-639 CE], was a bubonic plague epidemic. After the conquest of Jerusalem, the Amwas plague killed over 25,000-30,000 Muslims in total - However, but it did help Muslims and the future of Islam in many ways.

When Omar, (Allah be pleased with him), was the Khalif (Muslim leader, 634 to 644 CE) Muslim troops engaged in military campaigns in the Levant against Byzantine (Eastern Orthodox) troops. Soon, Syria joined the Muslims (638 CE). Just then a horrible plague came over them. It spread throughout a tiny village of Amwas, 30 miles outside Jerusalem.

The Plague of Amwas started out from left-overs of epidemics, called Justinian Plagues (540 to 750 CE). It spread over Syria, Iraq and Egypt, and this came at time of severe famine in the lands of southern Levant. As soon as Omar, (Allah be pleased with him), the Muslim leader, heard the news of the plague in Sham, he immediately left Madinah to leader what procedures were enacted by the Muslims.

A delegation of Shami leaders came to meet Omar, including Amr Abu Ubaidah bin Jarrah, Khalid Bin Walid, Amr ibn AlAas, Yazid Abu Sufyan and Suhail Bin Amr. They discussed the pandemic in Syria and some supported a return to Madinah, the others wanted to continue regardless of the pandemic. Muslim leaders who did not follow Omar’s advice to return to Madinah had to watch as the pandemic killed between 25,000 and 30,000 people, even some Companions of our Prophet, salla lahu alayhi wassalam.

Omar, radiallahu anhu, had planned to appoint Abu Ubaidah, as his successor and save him from the plague. So, he sent a message to come immediately to Madinah for some discussions. Abu Ubaidah seeing through the message and realizing the actual intent, refused to abandon the believers dying from the plague. Directly after his message came back to the Kalif, Abu Ubaidah died alongside those whom he fought with for the sake of Al Islam. May Allah accept from them all, Ameen. Very soon after that, Mu’ath bin Jabal, newly appointed governor to Syria, fell to the same pandemic.

Where is the “Help” From Allah in Pandemics?

The Plague of Amwas gave “Help” in 4 ways.

#1. For any who died in combat, are martyrs and will live after death — not in graves but in beautiful birds under the Throne of Almighty God, until the Day of Judgement. They also have no Day of Reckoning, as we do and they have the very highest places in Paradise, beautiful places.

#2. It also brought attention to the Hadith of regarding martyrdom for those who die of harsh causes:

There are other factors allowing us to classify COVID-19 related deaths to martyrdom. Anwar Shāh al-Kashmīrī, mentions more than thirty categories of people deserve the rank of martyrdom in the hereafter, as enumerated by the Mālikī scholar Nūr al-Dīn al-Ajhūrī (d. 1066 AH).

Instead of focusing on specific categories, al-Kashmīrī focuses on an examination of all the hadiths on the subject leads us to derive general causes of death resulting in someone acquiring the rank of martyrdom; these are exemplified by those people explicitly mentioned in the hadith.

These include: (1) a prolonged and painful ailment, e.g., a stomach illness (mabṭūn); (2) an acute harrowing illness (maraḍ hāʾil), e.g., a plague (maṭʿūn); or (3) a sudden tragedy, e.g., drowning (gharīq). As such, despite the distinction made between ṭāʿūn (Yersinia pestis infection with swelling of the lymph nodes) and wabāʾ (a general epidemic), those who die from COVID-19 can be classified as martyrs in the hereafter even if they did not die from an actual plague.

Think about the high objectives of the hadith — a person can fall under the first or second scenario mentioned above. The message of the Prophet ﷺ is not that martyrdom relates only to death by a particular bacterium named “X”, rather this human suffered and sacrificed patiently for the sake of Allah gets huge rewards in the Next Life.

#3. The Plague of Amwas depleted Muslim ranks in Syria. However it showed the steps to be taken in the times of pandemics —

According to Hadiths: Prophet Muhammad, peace be upon him, said; “When you hear a plague is in a land, don’t go to it, and if it occurs in a land you are already in then don’t leave it.” (Al Bukhaari [5739] and Muslim [2219)] narrated from ‘AbdulRahman ibn ‘Awf.)

#4. The word “Quarantine” is from the Spanish Muslims  who ruled Spain for almost 800 years. Anytime during plagues Spanish Muslims blocked ships away from the docks for 40 (Spanish: “cuarenta”) days. Italians heard and repeated it in their language (40 is “quaranta”). This  is used even today and calls attention to the Muslim way of handling plagues, epidemics and pandemics.

#5. Quarantine of the early Muslims is very similar to modern-day measures on COVID-19. The principle of quarantine is simple: The critical element of any pandemic is human to human contact. It must be minimized or completely eliminated in the outbreak. Islam features the protection of all human life, and both public and personal health.

We Muslims must follow the instructions of the experts and specialists.

Today, years after the COVID-19 began, many changes in the way we operate have changed — lock downs — working from home — home deliveries — distancing from others — PCR tests for air travel — And the loss of loved ones.

“Inna lillahi wa inna elayhi rajioon” (from Allah we come and to Allah is the return).

Let’s all make dua for the best outcome from whatever Allah gives us, Ameen.