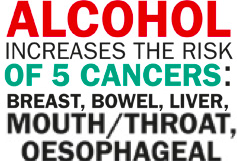 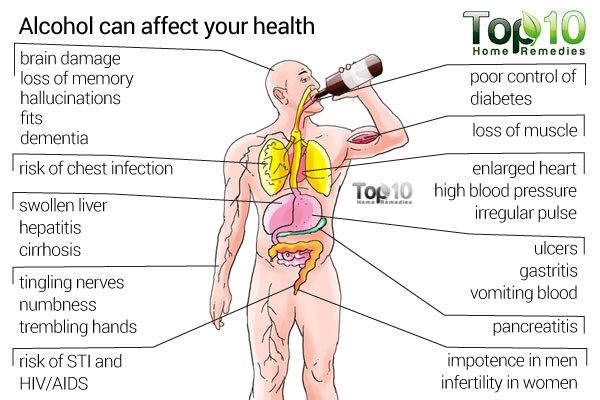 NOTE: Some studies recently got a lot of attention and big promotion (FALSE CLAIMS & FAKE NEWS) - by claiming ingredients in small amounts of alcohol in might reduce risk of heart attacks or stroke. However, this is from the ANTIOXIDANTS already found in the ingredients that are fermented to produce the alcohol.

BUT — THESE EXACT SAME ANTIOXIDANTS (POLYPHENOLS — compounds found in plants, including flavonoids and phenolic acid, great benefits for the human body and fight disease) These are readily available by eating bright colored fruits and vegetables, like red-ripe tomatoes, red and purple grapes.

Grapes contain the same, or even more polyphenols BEFORE fermentation (changing to alcohol), that indeed do protect against heart disease, strokes and many forms of cancer.

Studies indicate that women who drink even one or two drinks per day have an increased risk of breast cancer.

Drinking when combined with smoking can increase risks for esophageal cancer by more than 100 fold, an international team of researchers report. The team estimates that "up to 90% of esophageal cancers in men could be prevented if these habits could be abated," (Report in the August issue of the International Journal of Cancer).

Esophageal cancer remains one of the leading digestive-tract cancers, killing close to 9,000 Americans every year. Experts have long linked smoking and drinking with the development of this lethal cancer.

Over the long term, even a drink or two a day can result in abnormal liver functions. Over the years this can result in permanent liver damage, and consequently total liver failure. Liver failure leads to death.

Unfortunately, stopping drinking cannot reverse the damage. Liver problems may show up a number of years after stopping drinking. Alcohol may cause Cirrhosis (liver failure), which may not show symptoms for years.

Those who drink have a higher risk of heart attack and stroke. Moreover, excessive alcohol consumption can damage the muscle of the heart, impairing its ability to pump blood, leading to a chronic condition called 'alcoholic cardiomyopathy'. This in turn may cause chronic congestive heart failure.

Alcohol is a major cause of obesity for several reasons. Carbohydrates have 4 calories per gram, fat has 9 calories per gram, and alcohol has 7. Thus drinking consumes significantly more calories than carbohydrate foods or non-alcoholic soft drinks. Drinking two drinks a day of beer or wine and just one or two of hard liquor will easily add 15 pounds within six months.

Moreover, our bodies absorb the alcohol quickly, it gets rapidly converted to sugar, and this causes the pancreas to secrete insulin. Insulin accelerates the conversion of calories into fat. Finally, alcohol slows down our metabolism, as a result we burn those calories more slowly.

Drinking excessive amounts of alcohol also impairs judgement, and reduces the body's reaction time. It is a fact that the large majority of traffic accidents are caused by excessive consumption of alcohol.

Several blood tests may be abnormal in an alcoholic patient. Often, alcoholics are anaemic as a result of low intakes of folic acid. This type of anaemia shows up as large red blood cells, and is usually detected in lab work to determine blood counts.

Alcohol also affects the liver, and various blood tests to gauge liver function may be abnormal. Liver enzymes (AST and ALT) are increased in the blood in a certain proportion to one another in alcoholic liver disease. The typical suggestive ratio is a level of AST that is twice the level of ALT. Another enzyme, GGT, may be high in the blood of someone who has been drinking recently.

Although the above tests are not diagnostic of alcoholism on their own, they are often used to confirm a suspicion of alcohol abuse or its consequences in certain patients who may not admit to alcohol abuse.

Men with chronic high-level alcohol consumption typically experience a decrease in the number of sperm as well as a decrease in sexual drive. Researchers believe that the alcohol lowers the level of the male hormone testosterone, both by decreasing the production of the hormone and by increasing the speed at which the body metabolizes it. This means that there is less testosterone available for normal sperm production and sexual function.

Alcohol may result in abnormal liver function and a rise in estrogen levels which may interfere with sperm development and hormone levels. Alcohol is also a toxin that can kill off the sperm-generating cells in the testicle. Consequently, there is indication that low motility may be linked to excessive alcohol intake.

Full-blown alcohol syndrome may be seen in women drinking three ounces of absolute alcohol daily (one ounce of absolute alcohol is equivalent to 2 beers, or 2 four-ounce glasses of wine or 2 mixed drinks made with one shot of hard liquor). Fetal alcohol syndrome involves poor growth both before and after birth. Other defects such as heart problems and brain abnormalities are also common. Lesser amounts of alcohol may be associated with more subtle abnormalities, and these may be seen with as little as 2 drinks per day (one ounce of absolute alcohol). More than one drink (more than two times a week) has also been associated with a higher incidence of miscarriage.

Over the long term, even a drink or two a day can result in abnormal liver function in the father, which can adversely affect hormones and sperm production. Researches have shown that this may have an adverse relationship with regards to the risk of fetal alcohol syndrome or other birth defects.

Studies indicate children of alcoholic parents are at risk of a many types of psychiatric disorders and behavioral problems. These children are far more likely to suffer from ADHD (attention deficit hyperactivity disorder) and overanxious disorder. Source — Journal of AmericanAcademy of Child and Adolescent Psychiatry.

The women (and children) at greatest risk for domestic violence are those whose partner is a regular drugs or alcohol consumer. This is according to results of a study conducted in emergency rooms across the US.

The fact that alcoholism is the major cause of domestic violence is also confirmed in police reports across the country.

It is found that some patients do experience looser stools after their gallbladders are removed, possibly related to the constant flow of bile into the intestine. Because alcohol can also lead to diarrhea, drinking may compound the problem of cholecystectomy-related diarrhea in certain cases.

Consistent high intake of alcohol causes toxicity to many of the organ systems, especially the liver and the pancreas.