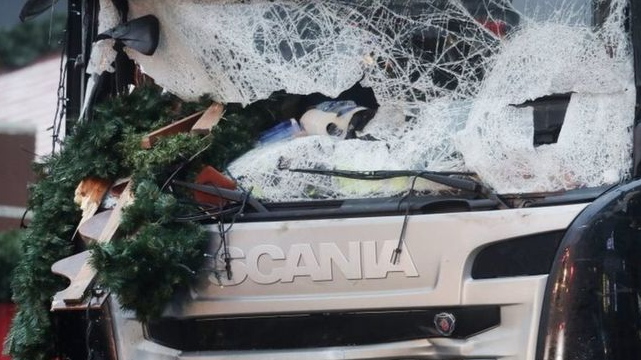 Is this attack by refugee? — Angela Merkel, the German Chancellor says it would be "particularly sickening" if the purpotrator is found to be a refugee.

A Pakistani man was questioned but then released after police determine he has no connection to the event.

Search still continues to find the driver of the semi, by police and investigators. A refugee shelter was searched by police at an old shut down airport in Berlin, but after thorough search police find no one of interest.

Mrs. Merkel commented, “We have to assume this was a terrorist attack,” and the responsible ones will be “punished as harshly as the law allows.”

Maiziere remarked that Christmas markets in Berlin will stay closed on Tuesday. However, other markets outside the capital area will continue as usual.

The Main shopping area in western Berlin’s market, Breitscheidplatz, near Kurfuerstendamm is home to Kaiser Wilhelm Church, damaged in World War II, by bomb attacks, and now a memorial for peace.

At the busiest time of the night as the main street filled with visitors and shoppers, the semi truck loaded with heavy steel beams crashed into the market area just after 8 PM. Vendor booths and stands jammed with visitors and locals were smashed and ripped apart as the truck tore through the market at speeds estimated at 40 MPH, tearing down lights, decorations and destroying everything in site. 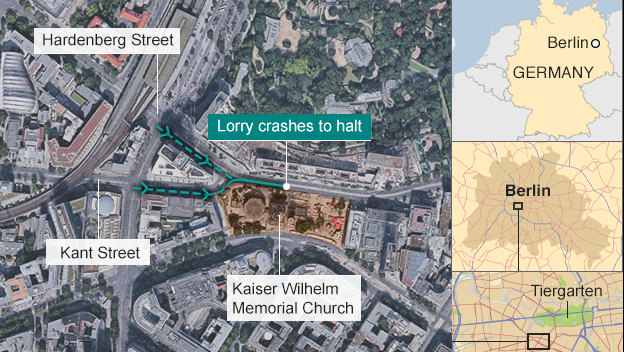 The owner of the semi truck, Ariel Zurawski, verified that his truck and driver had gone missing and were out of touch since 4 PM Monday.

Zurawski told reporters, ”We don't know what happened to him," and "He's my cousin, I've known him since I was a kid. I can vouch for him."

The truck, registered in Poland, was traveling from Poland or returning from Italy.

Armed police & ambulances were on the scene in minutes.

Chancellor Merkel said she’s "shocked and very saddened" by the crash and adds, "we don't want to live with fear of evil" and it would be disheartening for Germans to learn the refugees they had been supporting and helping were somehow related to this horrific event.

Eyewitness and British tourist Emma Rushton: "There's no way it just veered off the main road"

A senior member of Germany's anti-immigration AfD party, Marcus Pretzell, blamed Mrs Merkel for the attack, linking it to her open-door migration policy which saw the arrival of more than one million people last year. 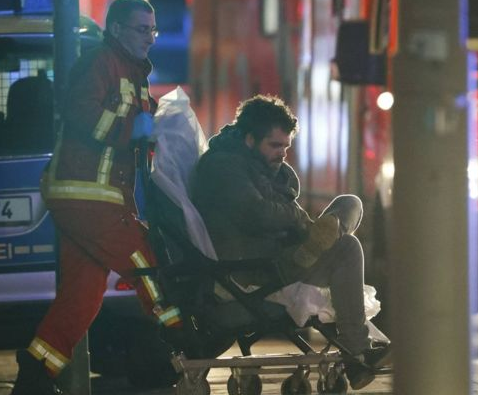 Mike Fox, an eyewitness from the United Kingdom, told reporters the 25 ton semi truck just barely missed him by, "only three meters" as it smashed its way through the vendors stands, knocking over the giant Christmas tree. He also said, "It was definitely deliberate."

Fox helped people with broken arms, legs and other obvious wounds along with others who were trampped beneath the booths. 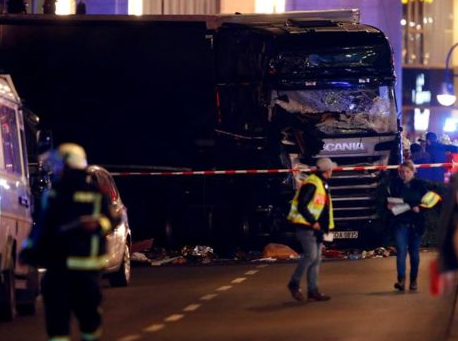 12 Killed and 40 people were injured in the crash

Trisha O'Neill, an Australian tourist visiting the exhibits told ABC (Australian Broadcasting Corporation), "I just saw this huge black truck speeding through the markets crushing so many people and then all the lights went out and everything was destroyed. I could hear screaming and then we all froze. Then suddenly people started to move and lift all the wreckage off people, trying to help whoever was there." The U.S. has called the tragedy a “terrorist attack” and is ready with military support.