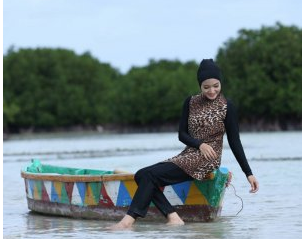 “LOOK ELSEWEAR” Frenchmen be advised - Nothing to gaze at here…

We found this online:

France’s recent burkini ban has triggered an international debate that reaches far beyond the beaches of Nice, Cannes and Corsica.

The ban, which has so far been implemented in 15 towns in France, stemmed from politicians who claimed that the distinctive dress could incite violence, a sentiment that was particularly resonant after the July 14 jihadist attacks in Nice.

Ironically, burkini inventor and Australia-native Aheed Zanetti, who trademarked the burkini (as well as the alternative spelling, burquini) when she came up with the modest swimwear design in 2004, has seen a 200 percent spike in orders thanks to the international publicity. However, in an interesting twist, Zanetti reports that all of the orders have come from non-Muslim women who discovered the style through recent press coverage. Their motive to cover up? Skin cancer.

"A lot of the correspondence... was that they are survivors of skin cancer and they've always been looking for something like this, saying, 'Thank god we've found someone like this producing such a swimsuit'," she says.

Considering that Zanetti's sun-drenched home country has the highest rate of skin cancer in the world, it makes sense that Australian women would seek out protective beach attire, and the burkini offers a swim-ready alternative to bulky, non-waterproof cover-ups. However skin cancer is not simply an Aussie issue — awareness has also spiked in the U.S., where the CDC reported that incidences of deadly melanoma has doubled in the last 3 decades.

Which begs the question, could the burkini be Los Angeles' next big beach fad? As more women make skin protection a priority over the bronzed look, beaches have already seen an increase in popularity of rash guards worn not only for surfing, but for increased coverage and sun protection.

The original burkini can be ordered from Zanetti’s Sydney-based online shop (priced from $40-$100), ships internationally, as well as at a few select Islamic clothing retailers.

While they’re few and far between in Los Angeles, there are a handful of stores a short drive down the I-5 in Orange County, which happens to be home to about 120,000 of Southern California's 500,000 Muslim residents. Two Anaheim-based stores, Al-Farah Islamic Fashion and Al-Anwar Islamic Fashion, stock the swim style.

Al-Farah carries a selection of modest, full-body swimsuits by local brand Geta, which produces them in a wide array of colors and patterns. Store manager Terry Awad noted that though burkini sales have grown steadily since the store began carrying them 10 years ago, there has not been noticeable surge in demand following France's burkini ban.

In addition to Southern California, beach goers in Canada are also free to sport the modest dress. Canadian Prime Minister Justin Trudeau stated on Monday, Canada will not carry out any such ban on its public beaches — despite the efforts of some politicians in the French-speaking territory of Quebec, who reportedly called to institute the ban its beaches. “In Canada, can we speak of acceptance, openness, friendship, understanding?" he said. "It is about where we are going and what we are going through every day in our diverse and rich communities."