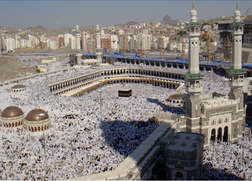 Let's all share the story and links five pillars of Islam.

Abraham (Ibrahim in Arabic) was first married to Sarah. After many years without children, Allah (God in English) gave Ibrahim, peace be upon him, another wife named Hajar (pronouced Hay-Gar in English).

Hajar had a lovely son and they called him Ismail (Ishmael in English).

Allah inspired Ibrahim, peace be upon him, in a dream to take his wife Hajar and his son, Ismail to a mountainous place in the desert.

Ibrahim, peace be upon him, knew he had to leave his wife Hajar and son, Ismail there between the mountains of Makkah, as a test for him. This may be because of his devotion and love for both his young son and wife, Hajar. In any case, as he was walking away, she called out to him, but he did not reply. Again she called out, yet he still did not reply. Finally, she asked, "Is this from Allah?"

He indicated by a sign to her - that in fact, "Yes" it's from Allah. Yet, another test for them all. Following the actions of Ibrahim, peace be upon him in Hajj
Stonning of the Jamerats in Mina

Hajar also was being tested as she watched her young son becoming very hungery and thristy after they ran out of food and water.

Hajar began running back and forth between the two hills of Safa and Marwa, looking for a passing caravan or some help for them.

The angel Gabriel (Jibril in Arabic) came to her and struck the ground with his heel and out gushed pure and delicious, sweet water forming what is today the well of Zamzam.

Eventually caravans did come to the area and by the permission of Hajar, they settled there and established a village - Bakkah. Since then the name has become Makkah.

Today it is a city visited by Muslims from all around the world - millions and millions come each year during Ramadan (month of fasting) and Dhul Hijjah (month of Hajj).

Of course today all Jews, Christians and Muslims know this was a test to see if Ibrahim, peace be upon him, would be willing to sacrifice the most beloved things in this world for the sake of pleasing Almighty Allah.

Allah was pleased and made sure the knife did not even leave a mark on the boy and instead produced a ram for the sacrifice. Muslims today, still sacrifice an animal for distribution to the poor and to share with family and neighbors, even if they are not Muslims. This is done of the Day of sacrifice, 10th Dhul Hijjah.

And when he reached with him [the age of] working, he said, "O my son, indeed I have seen in a dream that I [must] sacrifice you, so see what you think."

He said, "O my father, do as you are commanded. You will find me, if Allah wills, of the steadfast."

And when they had both submitted and he put him down upon his forehead, Allah called to him, "O Ibrahim, You have fulfilled the vision." Indeed, We thus reward the doers of good.

Indeed, this was the clear trial (heavy test).

And We ransomed him with a great sacrifice,

And Allah left for him [favorable mention] among later generations"Peace upon Abraham."

Indeed, he was of Allah's believing servants.

There came to the area many great tribes, well known throughout history. The tribe of Jurhum was of the first to settle in the valley of Bakkah (now Makkah). It was from this tribe that Ismail married one of the daughters.

This actually makes all the decendents of Ishaq (Ishaaq in English), Ibrahim's second son - cousins and brothers in kinship of each other.

When she told Ismail about what happened, he told her, "That was my father and he is telling me to divorce you" and he married another woman from the same tribe.

This time the message Ibrahim, peace be upon him, left for his son was, "Tell him to firm up his doorstep" - meaning to keep his present wife.

According to scholars, all of this was all due to the way these women handled their lives and how they spoke about their husbands and situations when he was not there.

It was from this wife, all the descendents of Ismail, peace be upon him, are traced.

The next time Ibrahim, peace be upon him, came to Bakkah, he found his son there and together they built the Kabah (the large stone building that today all Muslims face in prayer).

The hajj or pilgrimage began with Ibrahim, peace be upon him, and continued over the many centuries. But without guidance the people fell into worshipping other gods in the sanctuary that Ibrahim and his son, Ismail, peace be upon them both, had built.

HAJJ became the fifth of the five pillars of Islam.