We have a question about "Dogs":

Dear Shaikh, I would love to get a puppy.
Can you please let me know if it is really Haram to have a puppy at my home.

Many people told me that God will curse me if I have one and they say my salat won't be accepted and they also say it's dirty and Angels don't visit the house which has a dog inside it.

Pls let me know I don't want God to curse me and I would truly love o have a Dog too.

Actually, dogs are mentioned in the Quran. Hunting dogs and even dogs sleeping alongside of the people of the cave, mentioned in surah 18 (Al Khaf).
It has also been established in Islam, guard dogs, work dogs and dogs to aid the handicap such as seeing eye dogs are also accepted.
Where is the problem with dogs, in Islam?
The real problem is not the dog itself, as much as it is the reason for having the animal in the first place.
Pets in general are discouraged unless there is some clearly established need and practical benefit, without causing any discomfort or hardship to the animal.
What is specifically known about having dogs is:
1. The angels of mercy do not enter the room containing images (statues, idols, displayed drawings and paintings) and dogs.
2. Buying or selling dogs is mentioned alongside curses for financial transactions
3. Having dogs (or any animals) for "pets" without practical purpose or real need, is equivalent to putting them in prison.
Some Muslims treat these clear rulings without regard, but they do so at the displeasure of Allah and His messenger, peace be upon him. Excuses and arguments from such people include some very one-sided presentations without concern for the well-being and freedom of the animals themselves.

How would you like to be left alone for hours and hours at a time, hoping for someone to come along and give attention to you and your needs - only to have them rub your hair, say some silly things, push a bowl of mixed animal waste & grass at you and then leave you again until you moan and groan from the need to use the bathroom and then finally allow you outside for minutes all the time encouraging you to hurry up so they can go back to watching TV or surfing the web?
Whether you want to admit it or not - the whole idea of "owning" a puppy is really about how you feel and what you want - Not in the best interest of the animal.
People make a lot of money from the "pet industry" today - in fact, billions of dollars are spent annually on all types of invented foods, medicines and more.
Share this article and comment (below)
www.IslamNewsroom.com/news-we-need/2353

PET BUSINESS - "GOING TO THE DOGS"!

This is due to several things, but mostly because of over emotional and psychological needs - of the OWNERS.

Although some will argue that owning a pet provides a constant affectionate companion, lowers stress and even offer the possibility of gaining psychological balance due to having complete control over some living creatures - the facts show it is all about emotional substitution - and BIG BUCKS.

Some elders who have little or no family to provide love and other emotional fulfillment are persuaded to believe pets provide a substitute family to replace children who have gone off to form their own lives outside the realm of their parents.

Young people show more interest in relationships with theisr pets than establishing married life and even using pets to replace the emotional loss of divorce.

One recent survey showed 68% of respondents - treat their pets like their own children or EVEN BETTER.
All time highs are reported in veritable pet-buying frenzy amongst these particular groups, at the increasing rate of almost 4% annually, even in recent times of recession.

Even more money is being made in all types of pet products, services and medical expenses for pets.
Today the vast majority of pet owners consider their pets as members of their family, often times preferring these animals over their own real family.

Health, medical and even psychological care for pets sometimes reaches the level of cost for the same as humans.

Personalized and designer products and even high-tech gadgets, such as automated food dispensers, are now quite common.

TV ads for mouthwash and electric toothbrushes are common and routinely used in doggy beauty salons.
Dogs, cats and even birds can now receive a manicure complete with nail polish.
Dog grooming, training and daycare services are flourishing. Meanwhile, health insurance for dogs and ID tags are becoming strong categories in their own right.
The fact is, the care of the dog is the most powerful trend within the industry - Consider this:
Stores have rows of shelves loaded with energy treats, organic foods, weight control pills, etc.
But that's just the beginning - Look at this:
Doggy pet insurance? Veterinary costs? Drugs and medicines? - For DOGS?

Then of course:
Dog training & behavior modification, even reprogram the dog's normal desires for owners desperate to control every aspect of the dog's natural inclinations.

Contrast this to the permissible ownership of dogs for Muslims:

All of these dogs are kept outside, except dogs for handicap purposes, then they have limited access to certain areas of the home.

Don't let your life "Go to the Dogs" 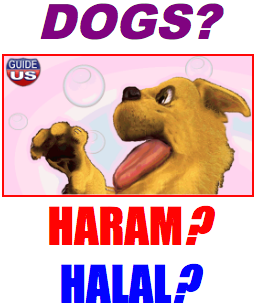