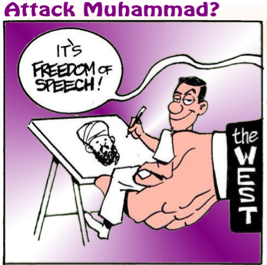 "Freedom of Speech is protected so all people can say anything they like!" (yes/no?)

"Religion has no protection against attacks and insults in society!" (yes/no?)

"People need to accept anything others want to say, no matter how it hurts!" (yes/no?)

"There must be limits against people saying or doing things to hurt others feelings" (yes/no?)

A Left-wing cartoonist is to go on trial on Tuesday on charges of anti-Semitism for suggesting Jean Sarkozy, the son of the French president, was converting to Judaism for financial reasons.

Maurice Sinet, 80, who works under the pen name Sine, faces charges of "inciting racial hatred" for a column he wrote last July in the satirical weekly Charlie Hebdo. The piece sparked a summer slanging match among the Parisian intelligentsia and ended in his dismissal from the magazine.

"L'affaire Sine" followed the engagement of Mr Sarkozy, 22, to Jessica Sebaoun-Darty, the Jewish heiress of an electronic goods chain. Commenting on an unfounded rumour that the president's son planned to convert to Judaism, Sine quipped: "He'll go a long way in life, that little lad."

A high-profile political commentator slammed the column as linking prejudice about Jews and social success.

Charlie Hebdo's editor, Philippe Val, asked Sinet to apologise but he refused, exclaiming: "I'd rather cut my ****s off."

Mr Val's decision to fire Sine was backed by a group of eminent intellectuals, including the philosopher Bernard-Henry Lévy, but parts of the libertarian Left defended him, citing the right to free speech.

Last week, the anti-capitalist, anti-clerical Sine, who recently founded his own weekly magazine, Sine Hebdo, took Claude Askolovitch, the journalist who first accused him of anti-Semitism, to court for slander in a separate case.

"When I heard that I was being treated as anti-Semitic, my blood ran cold," he said during the trial, adding that if Mr Askolovitch had turned up in person, "it is not a trial he would have had, but a head butt."

Sine is the defendant in Tuesday's court case in Lyon, southern France. The plaintiff is the anti-racism and anti-Semitism group, Licra.

The issue of anti-Semitism, already sensitive in a country still marked by the Alfred Dreyfus affair - the Jewish army captain wrongly accused of spying in the 19th century – has become even more charged in recent weeks due to Israel's Gaza offensive; France was hit by a series of anti-Semitic acts, including firebomb attacks on synagogues.

The young Mr Sarkozy, who is now the leader of his father's party in the president's old fiefdom, the chic Paris suburb of Neuilly-sur-Seine, has since married.

He has denied converting to Judaism.