Many of our readers are concerned about the recent Ebola outbreak in Africa and request us to bring some evidence about this very serious topic. The following is based on dictionary, encyclopedic references.

If you or anyone you know shows signs of Ebola as mentioned below
immediately contact the Ebola Control Center and seek immediate
medical attention and avoid physical contact with anyone.

Ebola [(i- boh -luh)] highly lethal disease from a virus; causes massive internal bleeding. Considered to have originated in central Africa and passed to humans from monkeys and apes. 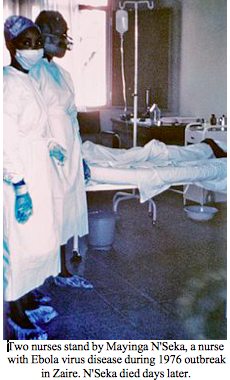 Note : This virus is responsible for increased interest in and vigilance
over new, exotic infectious diseases at risk of spreading rapidly, due
to jet airline travel and bioterrorism.

What does Ebola do? –

Ebola is a highly lethal virus that causes massive internal hemorrhaging. It is thought that the virus originated in central Africa and was passed to humans from primates.

What does Ebola mean? –

Ebola virus disease (EVD; also Ebola hemorrhagic fever, or EHF), or simply Ebola, is a disease of humans and other primates caused by Ebola viruses.

What are signs of Ebola? –

Signs and symptoms typically start between two days and three weeks after contracting the virus as a fever, sore throat, muscle pain, and headaches. Then, vomiting, diarrhea and rash usually follow, along with decreased function of the liver and kidneys. At this time some people begin to bleed both internally and externally.

What are risks of those infected with Ebola? –

The disease has a high risk of death, killing between 25 percent and 90 percent of those infected with the virus, averaging out at 50 percent. This is often due to low blood pressure from fluid loss, and typically follows six to sixteen days after symptoms appear.

How does Ebola spread? –

The virus spreads by direct contact with blood or other body fluids of an infected human or other animal. Infection with the virus may also occur by direct contact with a recently contaminated item or surface. Spread of the disease through the air between primates, including humans, has not been documented in either laboratory or natural conditions. The virus may be spread by semen or breast milk for several weeks to months after recovery. Fruit bats are believed to be the normal carrier in nature, able to spread the virus without being affected by it.

How do humans become infected with Ebola? –

Humans become infected by contact with the bats or with a living or dead animal that has been infected by bats. After human infection occurs, the disease may also spread between people. Other diseases such as malaria, cholera, typhoid fever, meningitis and other viral hemorrhagic fevers may resemble EVD. Blood samples are tested for viral RNA, viral antibodies or for the virus itself to confirm the diagnosis.

How to control outbreaks of Ebola? –

Control of outbreaks requires coordinated medical services, along with a certain level of community engagement. The medical services include: rapid detection of cases of disease, contact tracing of those who have come into contact with infected individuals, quick access to laboratory services, proper care and management of those who are infected and proper disposal of the dead through cremation or burial.

What are methods of prevention? –

How to handle samples of Ebola? –

Samples of body fluids and tissues from people with the disease should be handled with special caution.

What is the treatment or vaccine against Ebola? –

No specific treatment or vaccine for the virus is commercially available, although a number of potential treatments are being studied.

What is available for those infected with Ebola? –

Efforts to help those who are infected are supportive; they include either oral rehydration therapy (drinking slightly sweetened and salty water) or giving intravenous fluids as well as treating symptoms. This supportive care improves outcomes.

When and where was it first discovered?

EVD was first identified in 1976 in an area of Sudan (now part of South Sudan), and in Zaire (now the Democratic Republic of the Congo).

What part of the world is most affected with Ebola? –

The disease typically occurs in outbreaks in tropical regions of sub-Saharan Africa. Through 2013, the World Health Organization reported a total of 1,716 cases in 24 outbreaks.

Where is the current place for outbreak of Ebola? –

The largest outbreak to date is the ongoing epidemic in West Africa, which is centered in Guinea, Sierra Leone and Liberia. As of 16 November 2014, this outbreak has 15,145 reported cases resulting in 5,741 deaths.