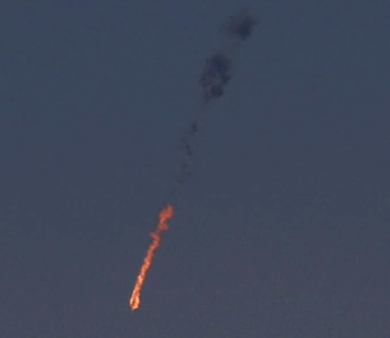 Jerusalem (AFP) - Israel downed another Syrian military plane over the Golan Heights on Tuesday in the first such incident in three decades and warned it would respond "forcefully" if its security is threatened.

As crazy as this sounds - Syria now claims, By this action - "Israel has joined Syrian rebels" - supporters of Al-Qaeda

It was the second time Israel had shot down a Syrian plane, the first was an unmanned drone and drew a sharp response from Damascus. 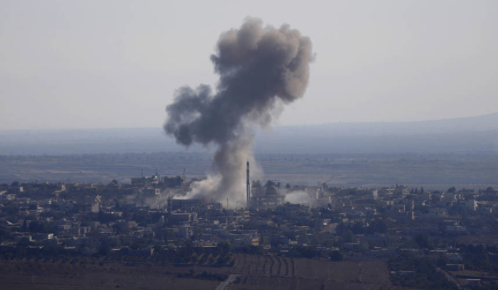 Israel said the Syrian fighter jet had crossed the UN-patrolled ceasefire line on the Golan Heights area (now occupied by Israel) which it regards as its international border.

The Syrian jet had just bombed one of its own villages called Jubata al-Khashab, moments before Israel shot it down with a Partiot surface to air missile.

The bombing and then the plane's burning wreckage, were all caught on camera, after it plunged down on the Syrian side of the ceasefire line.

Defence Minister Moshe Yaalon said the army had brought down "a Syrian fighter plane which approached Israel's sovereign territory on the Golan in a threatening manner, and even crossed the frontier." 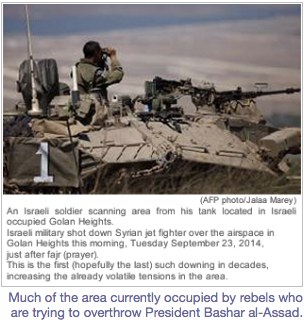 A senior military official quoted by Israeli public radio said the Russian-made Sukhoi Su-24 had penetrated some 400 meters (about 1,000+ feet) into annexed Israeli occupied portion of the Golan Heights, before they shot it down.

Israel seized and occupied 1,200 square kilometers (460 square miles) of the strategic plateau from Syria during the Six-Day War of 1967, then made claim to annexing the area in 1981. However, this move has never been accepted by the Palestinians nor has been recognized by the international community.

The Assad regime has been hitting back with frequent air strikes in a bid to retake control. Some have been close to Israeli positions.

Damascus said the downing of its fighter jet demonstrates Israel's support for the rebels on the Golan.

However, that would be is strange, as this includes Al-Qaeda loyalists. The same ones who held 45 UN peacekeepers hostage for two weeks before releasing them earlier this month.

Syria described it as a "flagrant violation" of a UN Security Council resolution passed earlier this year calling for international action against jihadist groups.

But Yaalon warned that Israel would not tolerate any threats to its security and would respond "forcefully".

"We will not allow anyone, whether it is a state actor or a terror organization, to threaten our security and breach our sovereignty," he said. 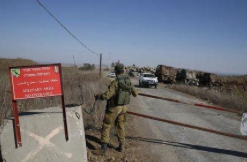 "We will respond forcefully against any such attempt, whether it is an error or intentional."

Since the uprising against Assad's rule erupted more than three years ago, the Golan has been tense, with a growing number of rockets and mortar rounds hitting the Israeli side of the ceasefire line.

Most of them have been stray, but there have been several incidents of intentional fire, one of which killed an Israeli teenager in June, and Israel has occasionally retaliated.

Some 510 square kilometers of the Golan remain under Syrian control, with UN peacekeepers overseeing a buffer zone along the armistice line stretching some 70 kilometers (45 miles) from Lebanon in the north to Jordan in the south. 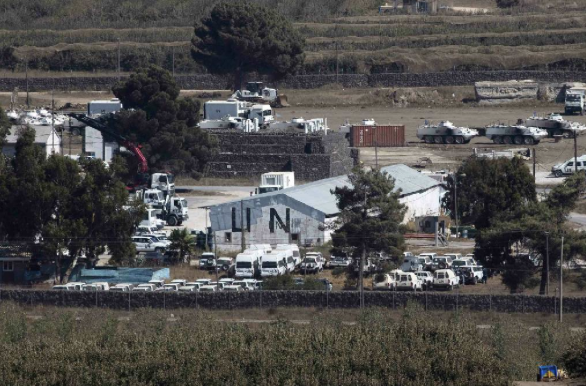 Last week, the UN Disengagement Observer Force, which monitors the ceasefire, was forced to withdraw hundreds of its peacekeepers to the Israeli-occupied sector after rebels advanced on their positions.

Syria's UN ambassador accused the rebels of seizing UN weapons, uniforms and vehicles from the peacekeepers in order to set up a "safe zone" from which to wage attacks.

The UN Security Council held a special session on the deteriorating security situation on the Golan, at which members called on the rebels to withdraw from the buffer zone and return peacekeepers' equipment.

The session was convened over concerns for the safety of the UN force after 45 Fijian peacekeepers were held captive for two weeks by Al-Qaeda affiliate Al-Nusra Front. They were eventually released unharmed earlier this month.

#1 cupcake 2014-09-24 10:49
israel was supporting al qaeda??? most likely they are al qaeda.
syrian rebels are supported by US.
"We will respond forcefully against any such attempt, whether it is an error or intentional." israel always plays the victim.
as for mortars & stray rockets hitting ceasefire line, sounds like a lie. similar story used about hamas firing rockets into israel.
looks like israel is itching for WW3. they wants total control of golan heights.
the worst is yet to come.
Refresh comments list
RSS feed for comments to this post