But is it Just Another Fake Victory?

The power grab by the ruling generals delivered another major blow to hopes for a democratic transition born out of last year's uprising that ousted authoritarian leader Hosni Mubarak.

The generals deny having effectively staged a coup and rendering the elected president a mere figurehead, will maintain authority over the crafting of laws and the drafting of a new constitution. Civilian oversight of their budget and other affairs will be strictly off-limits.

If Morsi's victory is confirmed in the official result expected on Thursday, it would be the first victory of an Islamist as head of state in the stunning wave of pro-democracy uprisings that swept the Middle East the past year. But the military's moves to retain power sharpen the possibility of confrontation and more of the turmoil that has beset Egypt since Mubarak's overthrow.

"The military may partially exit from power after a new round of tough negotiations with the Islamist and the secular opposition on safeguarding its interests," said Azzedine Layachi, a Middle East expert from St. John's University in New York. "However, and no matter what, the military will continue to play a dominant role in Egyptian politics. The question for now is whether they will continue to do so directly for the coming years or indirectly behind the faç

ade of a civilian rule."

In Washington, Pentagon press secretary George Little said the U.S. was troubled by the timing of the military leaders' announcement and would urge them "to relinquish power to civilian-elected authorities and to respect the universal rights of the Egyptian people and the rule of law."

"This is a critical moment in Egypt, and the world is watching closely," State Department spokeswoman Victoria Nuland told reporters. "We are particularly concerned by decisions that appear to prolong the military's hold on power."

The Obama administration has sought to safeguard its interests while championing change in Egypt. Mubarak made Cairo a bulwark of American influence in the Middle East before being pushed from power in February 2011.

The new measures came just days after a court packed with judges appointed by Mubarak dissolved the Islamist-dominated parliament, and the military assumed broad authority to arrest civilians — and less than two weeks from the date the rulers set for a transfer of power back to civilians.

The generals issued a "constitutional declaration" late Sunday before even a single ballot was counted at the end of the second and final day of a presidential runoff that pitted Morsi, a U.S.-trained engineer, against Ahmed Shafiq, Mubarak's last prime minister.

The new president, according to the document, will not be able to declare war or order troops out on the streets in case of domestic unrest without the prior consent of the military. He will also have no say in the affairs of the military, whose top brass will exclusively exercise the right to appoint commanders and extend their service.

The declaration removes the title of "Supreme Commander of the Armed Forces" from the next president, breaking with the tradition enshrined by Egypt's four presidents since the overthrow of the monarchy nearly 60 years ago. All four were career military officers.

Using its legislative authority, the military council issued another decree made public on Monday forming a new national defense council made up of 11 senior military commanders, including the defense minister, as well as the president. Though the council's mandate was not specified, it appears to be another step to limit the role of the president and enshrine the role of the military as the highest authority over national security policy.

Additionally, implicit in the new political timeline spelled out in the first document is that the next president may not serve more than one year of his four-year term and that the generals would remain in power at least until early next year.

The declaration says preparations for a new general election must start within a month of adopting a permanent constitution in a nationwide vote, something that is not likely to happen before late this year. With a new constitution widely expected to redefine the nation's political system, including the powers of the legislative and executive branches, new presidential elections will most likely be inevitable soon thereafter.

The declaration gives the generals the right to replace the 100-member panel selected by the dissolved legislature last week to draft a new constitution. Liberals and others have boycotted the panel to protest what they said was its domination by Islamists, the same reason that led to the dissolution of a previous panel by a court ruling.

Mostly Islamist lawmakers announced plans to try to force their way into parliament's building on Tuesday. The military has warned that soldiers stationed outside the facility since Thursday's court order would arrest anyone who tries.

Kristen A. Stilt, a Middle East expert from Northwestern University in Illinois, believes the scope of the military's concerns began to "dramatically broaden" when the Islamist-dominated parliament first sat about six months ago and later when the lawmakers sought to dominate a panel mandated to write a new constitution.

When Morsi's chances to win the presidency appeared to be good, the generals made their move when they still had the chance.

"From their point of view, these events threatened more than the military's privileges and interests, and the military moved in for what is being called a 'legal coup' — using the tools of law rather than, at least to date, significant force," she said.

Without naming Morsi, the generals on Monday sought to assure the nation that the next president will have full presidential powers and that the transfer of power remained on track for before the end of this month.

They said the new president will have the authority to appoint and dismiss the government and can reject legislation forwarded by the military as the interim legislative branch.
"We'll never tire or be bored from assuring everyone that we will hand over power before the end of June," Maj.-Gen. Mohammed al-Assar, a senior member of the ruling military council, told a televised news conference Monday. The transfer, he said, will take place in a "grand ceremony" for the whole world to see. He did not give an exact date.

"The military risks squandering the support it has if it seems like it is resisting any form of change," said Jon Alterman, a Middle East expert from Washington's Center for Strategic and International Studies. "As I read it, there is a broad constituency for measured change in Egypt, and the military has demonstrated great difficulty managing expectations."

But the promise by the ruling council to hand over power did not satisfy Islamists like Morsi's Muslim Brotherhood, Egypt's most powerful political group.

In a statement, the Brotherhood's political arm, the Freedom and Justice party, said the generals had no right to issue the constitutional declaration less than two weeks before the scheduled handover, and rejected their endorsement of the court ruling that dissolved the legislature.

The military has been the single most dominant institution in Egypt since a group of young officers seized power in a 1952 coup and later overthrew the monarchy. Many in the pro-democracy youth groups behind last year's anti-Mubarak uprising have warned that the generals who took over from Mubarak would not willingly step down and allow civilians to take over the reins of power. Also at stake is that the generals don't want anyone meddling in their affairs and demand immunity from civilian scrutiny of their vast economic interests. 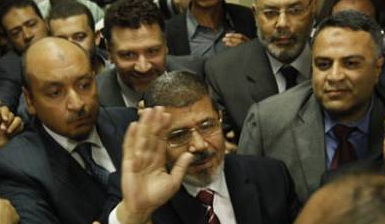 The backdrop to those concerns is a history of enmity between the military and the Brotherhood, which emerged after Mubarak's ouster as the nation's most powerful group.
The army officers who seized power in 1952 turned against the Brotherhood two years later, jailing its leaders along with thousands of their supporters. Mubarak, mentor of the generals who succeeded him, spent most of his 29 years in office cracking down on the group.

The Brotherhood has spent most of the 84 years since its inception as an outlawed group, a time it used to master underground work and discipline its members. Also over the years, it has built a reputation for opportunism and backroom deals.
Secular activists say the group has abandoned them during a series of anti-military protests in the 16 months since Mubarak's ouster in which security forces used deadly force. At the time, they claim, the Brotherhood was close to realizing its dream of political domination and did not want to do anything to upset the generals.
Though official results have not yet been announced, the Brotherhood released a tally that showed Morsi took nearly 52 percent of the vote to defeat Shafiq, who mustered 48 percent in a very close race. The count was based on results announced by election officials at individual polling centers, where each campaign has representatives who compile and release the numbers before the formal announcement.
The Shafiq campaign rejected Morsi's claim of victory and accused him to trying to "usurp" the presidency or lay the groundwork to challenge the official result if it shows Shafiq winning.
In a victory speech at his headquarters in the middle of the night, Morsi, 60, clearly sought to assuage the fears of many Egyptians that the Brotherhood would try to impose stricter provisions of Islamic law. He said he seeks "stability, love and brotherhood for the Egyptian civil, national, democratic, constitutional and modern state" and made no mention of Islamic law. 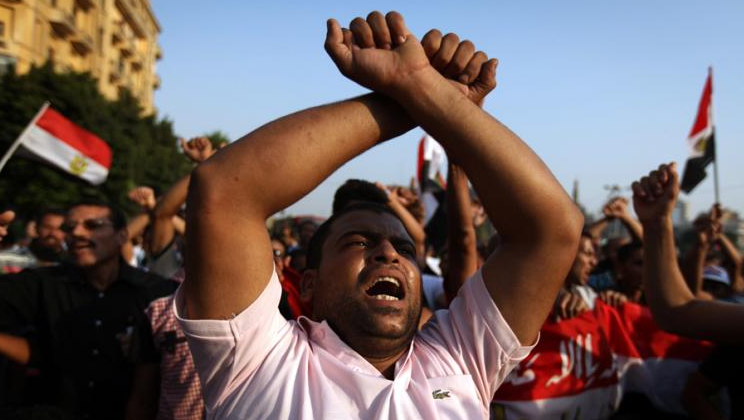 "Thank God, who successfully led us to this blessed revolution," he said. "Thank God, who guided the people of Egypt to this correct path, the road of freedom, democracy."

COMMENTS
You Type - We Print
(after review)
Please - Only One Time Click.

#4 AHMED SOULIMAN 2012-06-20 16:07
Dears, _firstly thanks for sharing your opinion about Egyptian revolution and i would like to till you that i was one of the revolutionaries in altahrir square._about democracy and religion surely can be exist side by side, because this special religion ideology leads us to the below, _equality, Mercy, Freedom,...ETC which we missed in the past and extremely needed today._our Islam is a lifestyle not only prayers we do._sorry, for Talking too much but at the end please ask god for us to save our country and complete Mohamed Morsy success {?? ??}_?????? ????? ? ???? ???? ???????
#3 saad 2012-06-19 13:53
these people are going to apply what is better than democracy , which is Shareia !! its what we NEED !
#2 Anar 2012-06-18 15:00
democracy-it's rule from people..but we need rule from God and it will be Sharia
#1 Benson 2012-06-18 14:54
This is all phony. People should know they will never be rulers in those countries cause they are not democratic enough.
Religion and democracy cannot exist side-by-side because one does cancel the other.
Duh!
Refresh comments list
RSS feed for comments to this post