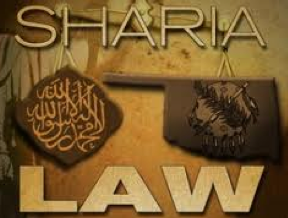 Should US Worry About Shar'iah's 'Islamic Constitutional Law'? -  Read..

Was America Founded on 'Constitutional Law' - Based on Theological Affirmations?

According to a recent decision of US Federal Appellate Court — one level below Supreme Court — not much.

A decision of 10th Circuit Court effectively stops the implementation of Oklahoma Law 755, (also called “Save Our State” measure).

Law 755 was passed as a constitutional amendment by 70 percent of Oklahoma voters in November 2010.
Along with prohibiting courts from using “international law”, it also expressly “forbids courts from considering or using Shariah Law.”

Similar laws have passed in Tennessee and Louisiana and comparable bills are pending in at least 20 states.

The 10th Circuit Court received the case after US District Judge Vicki Miles-LaGrange decided in favor of Muneer Awad, executive director of the Council on American-Islamic Relations (CAIR) in Oklahoma, who had sued to block the law. He stated Law 755 violated the rights to religious freedom, protected by First Amendment of the United States Constitution.

The three-judge panel who issued the ruling against Law 755 did so mostly for procedural reasons, claiming Awad had grounds to raise First Amendment issues. Law 755, they agreed, expressly condemned only one religion: Islam, and of course this violates the establishment clause of the US Constitution, dictating the government not to favor any religion. Finally, the judges suggested there wasn't much reason for Law 755 in the first place. Supporters of Law 755 admitted “they did not know of even a single instance where an Oklahoma court had applied Shariah law.”

This issue's condition here in the U.S. is really more symbolic than anything else. It really isn't about law at all. It's about fear of the unknown. Most folks (even some Muslims) don't really understand much about the Shari'ah of Islam or what it implies and benefits those who bring it into practice concerning legal issues, particularly civil matters.

Funny thing is, most who oppose Shari'ah are quick to support what it represents for the common people and the common good.

Take for example, the religious majority - those people who promote their Bibles, Jesus and the 10 Commandments - All of which are brought into consideration within Islamic legal considerations.

Anybody who's worried about Shari'ah (and all America Muslims) should read it. Professor Corwin says, "American constitutional law is founded, not only on Enlightenment, philosophical notions, but also on theological affirmations". He even proves, American jurisprudence rests on deep ethic, quite congenial to transcendent "higher" reasoning.

And that is exactly what Shari'ah states as fact.

The Anglican Archbishop of Canterbury, Rowan Williams, was saying this back in 2008 when he stated in a BBC interview, “There are perfectly proper ways the law of the land pays respect to custom and community; that's already there.”

As Archbishop Williams discovered, much of the furor against his comments was focused on issues more on sensationalism. Different customs developed in Western democracies and Muslim majority countries regarding property (especially 'riba' - borrowing and lending), and family life (particularly marriage and divorce). But these contrasts could just as easily be applied to England and the United States a century ago, as well as England and the United States today. Divorce laws especially, have changed dramatically.

Common Law - a very important part of British jurisprudence system and an important part of the foundation for American Constitutional Law, actually are in line with, rather than opposition to Shari'ah of Islam.

One reason for this is “higher law”, the backgrounds of the different traditions, actually share an important Abrahamic ethic:

U.S. courts have the responsibility to uphold constitutional rights.

Other scholars and professionals have responsibilities to educate the public and dispel myths about Shari'ah.

For example, the American Bar Association recently sponsored a webinar entitled “Dispelling the Shariah Threat Myth.”
And Muslim scholars have been offering clarifications, among them “Dispelling Myths about Shariah” by Imam Mustapha Elturk. According to Elturk, Shari'ah is a set of principles that guides Muslims to secure five “protections”: faith, life, family, property, and intellect. In this sense Shariah is analogous to the “higher law” background of American Constitutional law.

The challenge is in the application. Just consider the debate in Western tradition - about how to apply the commandment “Thou shalt not kill.”

Shari'ah is bound to resurface in any U.S. presidential campaign. The way to move forward is to point out demagogues and allay fears of those concerned.
The debate over Shari'ah might even help us define a clearer role for religious reasoning in public life.
In short, it might help us find a much needed, Common Ground.