Centuries of contemplation and discussion amongst both Muslim and non-Muslim scholars have failed to provide any concrete evidence from the Prophet Muhammed, peace be upon him, or the Quran itself for that matter for understanding that is mutually accepted by the intellectual community at large.

Such an undertaking would require more than a short page or two on the Internet, especially in a news oriented website such as this.

However, we feel at least, the question must be dealt with from the perspective of a simple mind (like mine) for a simple answer, in simple English, inshallah.

A tree diagram of the Qur'anic initial letters,
labelled with the respective numbers of occurrences.
To be read right to left.

Tomes have been written over the centuries on the possible meanings and probable significance of these 'mystical letters' as they are sometimes called. Opinions have been numerous but a consensus elusive. There is no reliable report of Muhammad having used such expressions in his ordinary speech, or his having thrown light on its usage in the Qur'an. And, more importantly, none of his Companions seemed to have asked him about it. This apparent lack of inquisitiveness is cited as proof that such abbreviations were well known to the Arabs of the time and were in vogue long before the advent of Islam.

One well-known opinion is that these letters stand for words or phrases related to God and His Attributes. The famous CompanionsIbn Abbas and Ibn Mas'ud are said to have favored this view, as cited by Abu Hayyan al Andalusi in his Bahr Al Muhit. As plausible as it may sound, this opinion does not find favor among other classical commentators, because the possible combinations of letters are virtually infinite and the Attributes they represent seem to be chosen arbitrarily. For example, the translator Maulina Muhammad Ali translates these letters in his editions of the Holy Qur'an as follows: 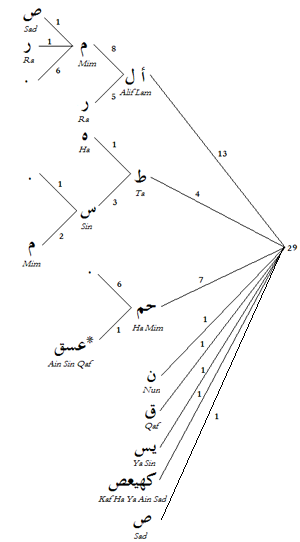 Fakhr al-Din al-Razi, a classical commentator of the Qur'an, has noted some twenty opinions regarding these letters, and mentions multiple opinions that these letters present the names of the Surahs as appointed by God. In addition, he mentions that Arabs would name things after such letters (for example, 'money' as 'ع', clouds as 'غ', and fish as 'ن')