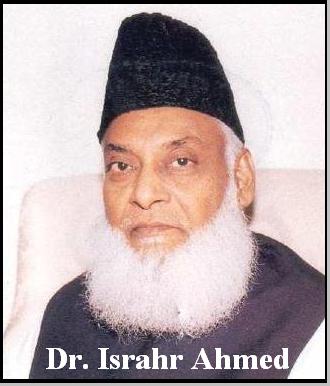 Lahore, Pakistan - April 14, 2010: Dr. Israr Ahmed,(Urdu: اسرار احمد), (April 26, 1932 - April 14, 2010)
Dr. Ahmed hosted a daily program on Peace TV, and until recently on ARY Qtv.
He was a Pakistan-based Muslim religious scholar.. ..followed particularly in South Asia and also among the South Asian diaspora in Middle East, Western Europe and North America. Born in Hissar, (today's Haryana) in India, the second son of a government servant, he was the founder of the Tanzeem-e-islami, an off-shoot of the Jamaat-e-Islami.

His friends and supporters describe him as having spent the "last forty years" actively engaged in "reviving the Qur'an-centered Islamic perennial philosophy and world-view" with "the ultimate objective of establishing a true Islamic State, or the System of Khilafah." Ahmed was skeptical of the efficacy of "parliamentary politics of give-and-take" in establishing an "Islamic politico-socio-economic system" as implementing this system is a "revolutionary process".

The veteran scholar died of a cardiac arrest at his home in Lahore on the morning of 14 of April 2010 between 3:00 - 3:30 AM. According to his son, his health detriorated at arround 1:30 in the morning with severe pain in the back. He was a long time heart patient.