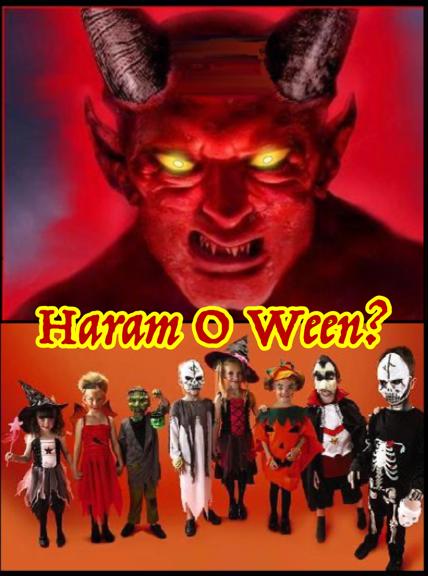 . . . Advice from Yusuf Estes - to My Muslims brothers and sisters - About Haram-O-Ween!

Four Things You Need to Know:

1. Halloween is PAGAN (mushrik) celebration - Catholics modified it to make them Catholics.

2. Avoid the ‘Night of Evil’! Shaytan is our real enemy! Don't get “TRICKED” at HARAM-O-WEEN

3. “Trick Or Treat!” — Or beggers for candy? Our Prophet, peace be to him, disliked begging!

Where Did 'Halloween' Come from?

Where did it all come from? Halloween influences many cultures and religions. The biggest is the pagans. Romans, Irish, Scotland, Britain, Wales and even Christianity. Most traditions of Halloween today go back to the Celtic DAY OF THE DEAD, a pagan holiday.

Samhain, was a Druid god of the dead. Druids were the religious order amongst the Celts. On this day, they were trying to make their "god" (Lord of Death) pleased. Druids also believed witches rode broom sticks and ghosts caused supernatural things to happen.

Halloween was also a time for MAJOR Shirk (making partners with Allah). Their belief was - "On the night before November 1st (October 31) eve of the Celtic New Year, the souls of the dead people roamed the land of the living. The Devil, spirits and witches were also believed to be moving about and had their most power on that night.

Games and religious rituals with fortune-telling and young people trying to see about marriage prospects and using "omens" like apple peelings thrown over their shoulders, or nuts burning in a fire.

The Pope, in the eight century, wanted to Christianize this pagan holiday since he wanted people to abandon the occult and idolatrous practices associated with it, and made November 1st All Saints' Day or All Hallows' (Holy) Day. This is a day to remember all of the Christians who died for their faith. October 31 was then considered All Hallow's Eve, and this word later evolved into the modern day - "Halloween".

3 Reasons To Stay Away From Halloween:

Most of the Halloween activities participated in today can be traced back to occult symbolism. For example:

1. Costumes: Worn to prevent spirits of the dead from recognizing people. Druids actually sacrificed animals and even humans. Then dressed up in skins of the dead. They also did fortune-telling while wearing skins of the dead. Another explanation is that today, children who dress up represent these spirits.

2. Trick-or-treating:  Druids went from house to house on October 31 demanding certain kinds of food. If they didn't get what they wanted, the people and their homes were cursed by trouble, sickness, even death.Wealth and health was promised to the ones who donated. Today, when kids are offered treats by neighbors, this goes back to the time people would offer food to appease the spirits.

3. Jack-o'-lantern: (carved pumpkins): It started as a legend of an Irish man named "Jack", who loved to trick the devil. But when he died - Jack could not go to Heaven (or Hell) so he just wandered around the earth with a lantern for light to see his way.Later, pumpkins were hollowed, carved and with candles inside - to scare away evil spirits (jinn).Some see them as symbols and spirits of past Halloweens.

Dealing with Halloween: 13 TIPS FOR PARENTS

So your kids have come home and begged you to go trick-or-treating on Halloween night (October 31). They can't wait for all of the bubble gum, lollipops and jawbreakers, not to mention dressing up in a Pokemon or witch costume like the rest of their friends.

You watch all of this in dismay. Knowing that Halloween is about Shirk (making partners with Allah) and Shaytan (see video review of Holiday Myths) you want to put your foot down once and for all and not let the kids go out that evening.

How to Deal with Our Kids on Halloween

Tip #1: Find out exactly what Halloween really is yourself - All too often, we really are not sure of the truth regarding these celebrations and holidays - like Halloween. This is not a small topic - Get the facts, before you talk about it. After you find out the real story behind "Halloween", you definitely won't want Muslim kids involved, in it. If you get correct facts and information, your kids will even agree with you about these rituals. Besides, they can "Google" too.

NOTE: All parents trying to raise kids as God-conscious children will not allow them to be involved with these pagan celebrations and "Holy Day". Just open up SheikhGoogle.com (our website) and type in the name of a holiday to find out the real story.

Tip #2: Discuss with them - BEFORE October 31 - It's easy to open a discussion about this, while the TV is promoting horror films and scary videos and stores are promoting candy, rubber spiders, masks and costumes. Talk to your kids right now. Don't wait 'til morning on the last day of October (Halloween is October 31, after dark). Let them think about it all and get used to your "alternate plans" for them.

Tip #3: Talk About Eid Celebrations - Don't give a speech about how "those non-Muslims are so evil" - that won't stop our kids, it just blinds them to the reality. Just explain, every group or culture has its own celebrations. We Muslims have our own too. The two Eids are what we celebrate. Not pagan things like Halloween. But when Eid comes, we will celebrate - big time.

NOTE: Do not condemn Muslims who do celebrate pagan holidays, like Halloween. Just calmly explain it, point out the dangers and let others think about it. This is real-life advice.

Tip #4: Mention more dangers of Halloween - Horror stories about razor blades in apples, Ex-Lax laxative given instead of chocolate to trick-or-treaters, or the dangers on the street should also be mentioned, but not made the focus of the reasons why you object to Halloween.

For example, at Eid-ul-Fitr, we celebrate our joy of fasting during the blessed month of Ramadan, which is a time we strive to get closer to Allah and be better Muslims.

Halloween, on the other hand, is celebrated partly as a reminder of Shaytan, who is evil, and from whom everyone should avoid and seek refuge in Allah from.

Tip #6: Be different - Emphasize, there is nothing wrong with being different, because there will be other occasions later in life when Muslim children must not participate in school activities (for example, the Prom)

This does not mean permanent exclusion from all school and/or peer activities, but it means that as Muslims, they can take what is good, but they also have to learn to reject what is bad in a wise manner.

Volunteer to come in during Ramadan, for example, to present and bring food for the kids during a talk about what is the month's significance for Muslims. For more tips see 17 Tips for Parents to Present Ramadan in your Child's Class

Tip #8: No Parties - If possible, don't send them to school the day of Halloween if there's a party

If the teacher has scheduled a class Halloween party, simply don't send Ali or Aisha to school that day.

However, before you do this, you should write a short letter or note to the teacher and/or principal explaining why your son or daughter will not be attending school that day.

Tip # 9: Visits - Take them to a Muslim friend's house on Halloween

Don't make this a special occasion. If you regularly meet with other Muslim families and your children are friends with their children, visit them or invite them over just to play or hang out. This can take their minds off the Halloween hysteria happening outside.

Or anything else Halal, just so you are not home when trick-or-treaters come knocking, which will reinforce the Halloween hysteria.

Tip #11: Prepare - Turn off the lights, close the windows and educate your neighbors

Turning off the lights will give the message this home isn't really interested in Halloween. Closing the windows may be necessary, since throwing eggs at someone's home who hasn't given candy is not uncommon on Halloween.

Educate your neighbors about Halloween by posting a brief polite note about why you are not celebrating the occasion. Shaema Imam for example, on one Halloween, posted a decorative note on her door telling neighbors she does not support the pseudo-satanic glorification of evil as represented by Halloween. However, she said it is excellent that there is neighborhood cooperation to promote children's safety on Halloween (there were efforts in her area to ensure kids could trick-or-treat in safety).

She also expressed her support for the collection of money for Unicef, which children sometimes do when they go trick-or-treating. Imam didn't get any comments, but no one egged her house either, she says.

Tip #12: Spread the word - two to three weeks in advance, organize a seminar

This would be for Muslim moms, dads and their young kids. There should be a presentation on what exactly Halloween is and what Muslim parents can do about it.

While this is being discussed, kids should be allowed to play together under the supervision of a couple of baby-sitters. This will serve to inform moms and dads, while giving kids a chance to have fun (and perhaps set up an invitation so they can avoid Halloween night craziness-see Tip #9)

Tip #13: Keep Promises About Eid - For a number of Muslim youth who have grown up in North America, Eid is sometimes just another day, with parents not even taking a day off work.

Parents: In other cases, while parents may take the day off, the ritual is the same: get up, put on new clothes, drive to fancy hall, pray, not understand what's really going on, hug Eid Mubarak, go back home, eat "ethnic" food, get money (as Eid gift). Period. It's no wonder our kids' eyes light up when they see Christmas lights, brightly wrapped gifts and hear of Halloween fun and treats

Make Eid SPECIAL: Don't just hype it up during Halloween to convince the kids not to participate and then break your promise.

Kids: On Eid, give the kids candy, take them out to dinner or an amusement park. Organize a party and invite their friends over. Arrange for them to have a gift exchange. The possibilities for Halal fun are there. We owe it to our kids, if we want them to stay Muslim and to be proud of it, to celebrate the occasions in life that really matter to us, like the two Eids.

"A person who calls another to guidance will be rewarded, as will the one who accepts the message." (Tirmidhi)