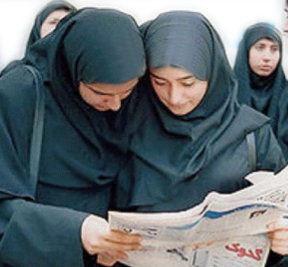 "How come you Muslims have four wives?"

There are many questions coming to our sisters in Islam asking them about oppression on women, hijab, multiple wives, equal rights and so much more.

We have a website with a lot of information, but knowing how to present the answer is very important too.

Here is an example of how you might answer the question about multiple wives, but only one husband:

"Islam is NOT a man-made religion for a particular time, place and culture of people - it is from the Creator and Sustainer of the universe - to test each and everyone of us as to our character and behavior - for us to see on the Day of Judgment why we will be put in our particular destination for eternity"

"If a woman marries more than one husband at a time, how would the child get their rights of inheritence? What about their rights amongst other children from different fathers - but the same mother?"

"If a woman can choose from any man, even the ones who are married, but a man can only choose from the unmarried women - who has the most choices?"

But first, before talking about Islam, Muslims, Allah, Quran or even their question - here are a few steps we have found to be very effective in helping see the true picture of Islam - and in some cases - even become MUSLIMS THEMSELVES...

1. First, we begin by saying

“Thank you . . for taking the time to ask me and for  sharing your ideas and concerns. It makes us happy to receive mail from all around the world and to be able to communicate with so many Muslims and non-Muslims about my favorite subject: Misconceptions About Islam and the Muslims.

It is our pleasure to hear you are interested to know more about Islam and the many benefits Islam offers to all humans throughout all times. This is important to us and we are always thankful for a chance to share Islam with everyone. . “

2. Say this:
First of all, let us do some basic research here:

If you have a Quran, turn to chapter four (4) and read it all the way through to help you better understand what Islam is really saying about humans in general and women in particular.

Then think about the verses. Doesn’t this make sense to you: Only God Knows all about what He has created? And also, doesn’t make sense only He would have the perfect answers for us in these matters?

Have you considered the condition of women at the time of the revelation of the Quran over 1,400 years ago?

The verse of the chapter in question talks about restricting the number of wives to be only 2, or 3, or maximum 4, and even then with more limitations.

All of this comes at a time when there were no restrictions or limitations on the number of wives or the treatment of women in general. You see, women were in very bad shape back then. All around the world women were suffering at the hands of men. For instance, did you know:

· Men would bury their new-born baby girls in the desert sands – alive? This was out of shame for having something so low, instead of a son.

· Women were treated with horrible disgust.

· Men had no limit on the number of wives they could have.

· There were no laws protecting women and they had no rights at all.

· Even the Church had convened a council meeting to determine if a women even had a soul.

· The Church blamed “Eve”, and damned her and all women after her for tempting Adam to eat the forbidden fruit in the Garden of Eden. (Islam puts the blame on Adam for what he did and on Eve for what she did – and they repented and Allah forgave both of them)

· Women are blamed in the Old Testament of the Jews for the “original sin” and treated in disgust.

· A woman's monthly cycle was considered by the Bible to be a "curse from God" for her inequities.

· Her child bearing pains were also a 'punishment from God' for her bringing man down from heaven.

OK, now read the verse from Quran we have been discussing (4:3) very carefully about having more than one wife.

What does it say? And what do you understand from it?

Verse 19 forbids men from inheriting (or marrying) women against their will. Young girls and orphans no longer had to fear being taken as “wives” to satisfy the desires of some man.

Now, read verse 24 to learn how Islam forbid men to marry women that are already married.

Next, read from verse 34, the orders from God Almighty, concerning the role of men and the position of women in front of the Lord Above. The commandment in this verse orders men to take on the role of supporter, provider, protector and custodian to the women.

A woman has the difficult role of carrying the child and delivering it and then feeding it and raising it to become a true servant of Allah.

Now it is time to mention some of the basics of Islam - to help them grasp a better understanding of what Allah's deen is really all about . . .

As we said in the beginning - Islam is about rights. Allah Almighty has the Right to be worshipped alone without any partners as He is the One and only God there is. The prophets all have the right to be followed by the true believers. After Allah and His prophets, the one having the very most rights, according to Islam is the mother, and then the father. But children also have rights in Islam.

When a man dies his wealth is left to his family.

How could the court know who to give the wealth of a man, if he was one of several husbands to a woman?

How would a child know who his father was?

Women were given rights.  Men were strictly ordered to treat their women with the very best of treatment.

First of all, the men had to divorce their wives, if they had more than four. So this was not an order to go out and get four wives.  It was an order to begin limitations.

And the first limitation was;  No more than four.

Second, consider the limitation of equal treatment for all of them. How could a man keep more than one wife unless he was exceedingly wealthy and/or exceedingly strong and virile?

Next, the limitation very clearly states; ".. but if you fear that you shall not be able to deal justly (with them) then only one ..."

Step by step, the men of Islam have come to be known today as the most monogamous of all men on earth. (we only have one wife)

Now ask them to really investigate for themselves:

Check for yourself and see. In the majority of all the Muslim homes on earth, a man gets married once, to one woman and then he stays married to her until the death of either himself or his wife.

It is strange isn't it, a society like America, that condones having sex without marriage, homosexuality, same sex marriages, sex without responsibility, children without fathers and divorces are more common place than the measles or chicken pox, would be so concerned about the way the Quran speaks against these things.

Islam demands that a couple be married, and the man actually work instead of the woman and the woman owns her own property without giving anything for the support of the house or the child, a children have the right to their own mother raising them instead of a baby sitter or day care, father must support his children, divorce is hated, marriage is sanctified.

This should stimulate the thinking process of any intelligent thinker. Let them have time to read the Quran, and see what comes to them. If they still have more questions, it may be that Allah is going to guide them through your efforts. So be patient and remember, it is only Allah who guides and we are only delivering the message, “Laa elaha illallah, Muhammadar Rasoolullah.” Let us know if we can help you in the future. We will be waiting to hear from you. May Allah Bless with His Guidance, amen.

And about the Bible and other links:

www.SearchForIslam.com (type in any words and it will search all our sites)