Question: Assalamulaikum Sheik - I was listening to one of your audio lectures concerning woman 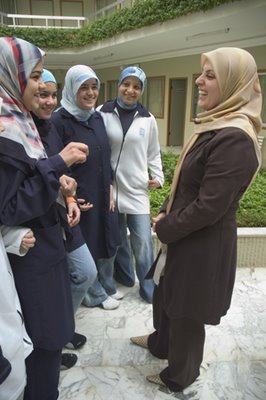 in Islam. You were talking about polygyny (marriage of men to more than one wife).

It was great to see that you consider women worthy of rights and respect. I was happy to see you acknowledged the fact that, women have leadership qualities and they can also be good leaders. But I was still curious that how can you acknowledge such a fact, when it is written in the Hadith that People who accept a woman to be a ruler of their affairs will not prosper? [Bukhari]

But, doesn't your opinion contradict the Islamic ruling on this topic?

Thank you for writing and for your question. First let us begin with Basics Of Islam [Click]

This is a unique part of Islam, not available in any other ancient religions.

First of all, if my answer does not represent Quran and accurate hadeeth, then take my opinion and throw it away. (This is similar the the statements of all the early imams when giving an opinion in any matter).

Second, we should be aware that Islam does not promote the idea of men and women being 'equal' or the same as each other. Rather Islam treats each gender in accordance with their needs and rights. These are two separate genders and each is different and distinct in their makeup and their roles in this life. To confuse this concept into the equation would limit the proper interpretation of the meanings of the Quran and the sunnah of our beloved prophet, peace be upon him.

As to your question, I do believe there is a hadeeth that translates more or less to English as saying - a community that has a women over it as a leader will not be successful.
This does not necessarily mean that women are not good leaders.
I believe the scholars have clarified this by mentioning the role of men is the role of protector, provider and maintainer of the women. (according to the Quran in Surah An Nisa, verse 34)

There is direct reference here to the role of the men being 'over' the role of the women. I believe that to mean that the man is the one who is responsible in front of Allah for these tasks. Allah Knows best.

Additionally, in hadeeth we find numerous references to women having the role of caring for their husbands, children and families, while at the same time providing good environment for learning and teaching the religion of Islam).

All of this seems to indicate to me that when men have not upheld their responsibilities in front of Allah and they have not taken care of business so to speak, to the extent that the women are being pushed into such roles of leadership; roles that Allah has already prescribed, then it is obvious the reference to being unsuccessful or 'punished' in any way is not derogatory to the women as much as it is toward the men for not doing their jobs.

There are some who have made reference to what Allah has said in the Quran concerning taking the testimony of two women to suffice for not have a man to accept the testimony or witness of certain things. [Surah Baqarah, verse 282]

O you who believe! when you deal with each other in contracting a debt for a fixed time, then write it down; and let a scribe write it down between you with fairness; and the scribe should not refuse to write as Allah has taught him, so he should write; and let him who owes the debt dictate, and he should be careful of (his duty to) Allah, his Lord, and not diminish anything from it; but if he who owes the debt is unsound in understanding, or weak, or (if) he is not able to dictate himself, let his guardian dictate with fairness; and call in to witness from among your men two witnesses; but if there are not two men, then one man and two women from among those whom you choose to be witnesses, so that if one of the two errs, the second of the two may remind the other; and the witnesses should not refuse when they are summoned; and be not averse to writing it (whether it is) small or large, with the time of its falling due; this is more equitable in the sight of Allah and assures greater accuracy in testimony, and the nearest (way) that you may not entertain doubts (afterwards), except when it is ready merchandise which you give and take among yourselves from hand to hand, then there is no blame on you in not writing it down; and have witnesses when you barter with one another, and let no harm be done to the scribe or to the witness; and if you do (it) then surely it will be a transgression in you, and be careful of (your duty) to Allah, Allah teaches you, and Allah knows all things

Scholars have mentioned that Allah provided the answer to any questions concerning this order and reference to two women for one man's witness in the verse itself. "but if there are not two men, then one man and two women from among those whom you choose to be witnesses, so that if one of the two errs, the second of the two may remind the other."

The clear indication here is that women, who normally did not get out into the public and business world, might err in remembering the details, or she might feel a bit intimidated and shy and as such would benefit by having someone present to help her recall more exactly.

Others have referred to the "mood"swingsof women during their monthly cycles or at the time when they reach menopause, that might cause them to forget or make mistakes in recalling the events. However, I believe this might be a weak opinion in light of the fact that Ayesha, may Allah be pleased with her, was always considered as reliable in matters of teaching and instruction even during these times in her life.

Finally, we should keep in mind that it is Allah who created the men and the women in whatever form He willed and it is not for us to question His creation nor His commands for His creation. Our job is but to "Hear and obey."

As Allah has said in His Book [Baqarah, verse 285]:
002.285
The messenger believes in what has been revealed to him from his Lord, and (so do) the believers; they all believe in Allah and His angels and His books and His messengers; We make no difference between any of His messengers; and they say: We hear and obey, our Lord! Your forgiveness (do we crave), and to You is the inevitable destination.

May Allah forgive any shortcomings from me in any of my programs or answers and may Allah grant you patience in dealing with my limited understandings, ameen.

Thanks again for your question. All good is from Allah mistakes were from myself.
May Allah guide us in Truth, ameen.
Salam alaykum - Yusuf Estes

Answers from Sheik Yusuf Estes, National Muslim chaplain. American born, former Christian, student of many scholars, yet he does not claim to be an expert. He does try to help give authentic information about ISLAM in easy English terms.