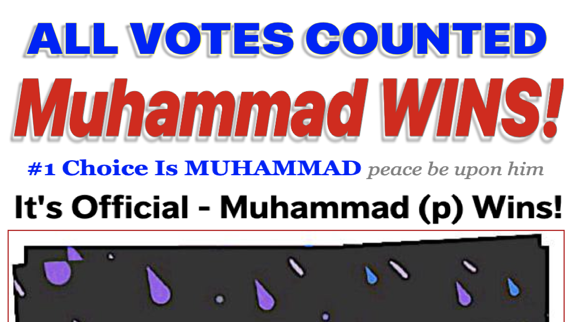 #1 Choice Is MUHAMMAD peace be upon him

All Muslims, everywhere choose Muhammad, peace be upon him, as their leader, role model and example for life.

This is 1/4 of total world's population (and GROWING EVERY DAY).

Prophet Muhammad (peace be upon him) regarding all faiths, he said:

"No Jew is to be annoyed because of their Judaic faith"

"By Allah, he is not a believer!" (3 times) "Whose neighbor does not feel safe from his evil - is NOT a believer". [Bukhari and Muslim]

"He who believes in God and the Last Day should honor his guest, should not harm his neighbor, should speak good or keep quiet."[Bukhari, Muslim]

He clearly specified, a Non-Muslim neighbor should receive this excellent treatment:

"Whoever hurts a Non-Muslim citizen of a Muslim state hurts me, and he who hurts me annoys Allah." [Bukhari]

And he said, "Whoever hurts a Non-Muslim in a Muslim state, I am against him and I will be against him on the Day of a Judgment." [Bukhari]

Prophet Muhammad, peace be upon him, was so supportive of good treatment for all people, he was ready to stand alongside Non-Muslims against the Muslims - who did not follow his teachings.

This is the true justice, leading to peace and prosperity Islam brought to our world.

Muhammad's excellence of character is sought after by all true believers, as noted by many non-Muslim historians too.

Anyone who studies the life of Muhammad, peace be upon him, will be amazed at his character and teachings.

Washington Irving wrote in his book - "In his private dealings he was just. He treated friends and strangers, the rich and the poor, the powerful and the weak, with equity and was beloved by the common people for the affability with which he received them and listened to their complaints." (Irving - "Mahomet and His Successors")

Read more of what non-Muslims say about Muhammad:

How many 'HITS' Can We Get Today?