Multiple tsunami warnings were issued for the hurricane devastated islands of Puerto Rico, the British and US Virgin Islands, Cayman Islands, Cuba and Nicaragua.

Warnings of a “potential threat” were also issued for Mexico, Panama, Guatemala, Costa Rica, Jamaica and Belize after the earthquake, initially recorded by the USGS as a 7.8 magnitude, struck 44km east of Great Swan Island, Honduras.

The advisories came as the region is still recovering from the devastation left by several deadly hurricanes last year – including Hurricane Irma, Hurricane Nate and Hurricane Maria.

The NWS Pacific Warning Center in a statement said: “Based on all available data… hazardous tsunami waves are forecast for some coasts.

“Persons located in the threatened coastal areas should stay alert for information and follow instructions from national and local authorities.” 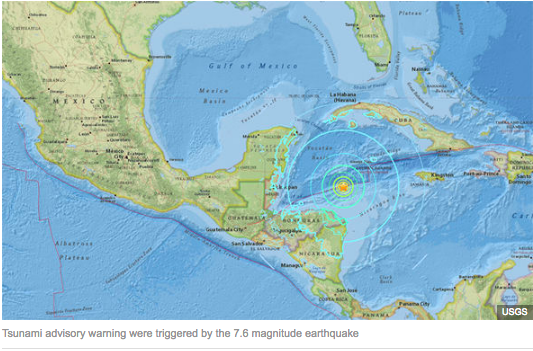 Witnesses reported seeing windows rattle in the Honduran capital of Tegucigalpa roughly 323 miles (519 km) to the east of the quake’s epicentre, but no reports of damage have emerged so far.

The quake was very shallow, at only 6.2 miles (10 km), which would have amplified its effect. 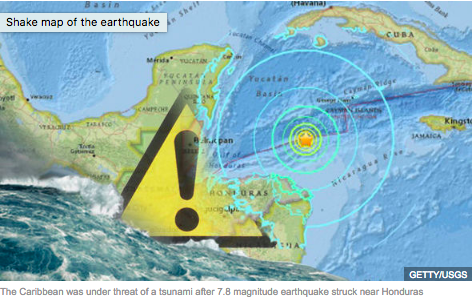 It was also lightly felt in the Mexican state of Quintana Roo north of Honduras, according to Mexico's civil protection director.

In Honduras, firefighters said some residents in southern neighbourhoods fled their homes after feeling the shaking.

The country operates a small naval base on Great Swan Island, about 27 miles (44 km) west of the quake's epicenter, but it was not immediately clear how the tremors affected the station.

Earthquakes in many places, huge in size, frequently striking around the entire world - All predicted by Islam for signs of Last Days!