Please share this corrected article with all your friends, inshallah.
If you want to skip this article and just go to the names - choose below!
[click here for BOYS NAMES] ~ & ~ [click here for GIRLS NAMES]

Question: I need good Arabic, Muslim or Islamic names for my new baby. What is acceptable?
I want good names for both boys and girls, with good meanings.


Answer: Good question.
[CAUTION] You may be surprised to learn something about so-called "Islamic names".
Please read to the end (lists are there):
Al Hamdulillah! Praise be to Allah.

First - "A TIP - from a great, grand father - God (Allah) has blessed us with something to occupy much of our time here on earth - our family.
What we do with those precious moments of our time lasts a lifetime, and longer - beyond our own lives - in our children, their children and children to come after them.
Give love, give care, give health, give knowledge, give wisdom - above all, give TIME." - Yusuf Estes

As Muslims we understand our children are trust given to us from Almighty God - Allah. He has put in our care a blessing and a challenge, wherebey we can be rewarded (or punished) considering our treatment from the very beginning.
God Almighty has given us many duties and assigned huge responsibilities as well as pleasures and joy with the birth of our cihldren.

We owe great thanks to God Almighty for our children and we owe the best we can offer from ourselves to our offspring - Our Time.

Whenever a child is born, it is her or his right to be given a proper, sound and good name.

Take care in choosing a child's name, because this name will have a very important impact on the way a person sees themself and the way others react when being introduced or reflecting on the name of the person.

Good names have good impact on the hearts. Strong names give way to strong impressions. Weak names can have negative impressions.

Honor your child with an honorable name, a name to be confortable with and never ashamed of or saddend by.

Remember, the name is a major influence on your child from the beginning, throughout and to the very end of their life. Choose wisely - and ask Almighty to accept and help your child all through this life and for a better life in the Paradise.

Second, we offer here, advice before choosing a name:

1 – NOT RECOMMENDED to only choose from names of companions of our prophet, peace be upon him. This is because some of their names were known and accepted in their society and at their time, but would be strange in other societies and at other times.

Al-Mawardi mentioned something when choosing names: "The name should have a good meaning and be appropriate for the one who is so called, and it should be common among people of his class and community."

We should choose a proper, good name for each child

The parents should choose a good name for their child, and it should not be weird or odd in the society in which they live, because having an odd name may cause the name or its owner to be made fun of, and he may feel too shy to mention his name to people.

If you want to choose a name from one of the companions of the prophet, peace be upon him, or a righteous person, or one of the prophets, consider the child first and whether or not you think your child really suits that particular name and if it would really fit in the society and time your child lives in and will grow in.

2 – Muslims do not have to give only Arabic names to their children. Any names with good meanings and positive aspects should be considered, as long as we avoid names with bad, negative or religious meanings outside the beliefs and teachings of Islam.

Scholars and teachers of knowledge have strongly urged against using names imitating Christianized (translated spelling and/or pronounciation) like; John (instead of Yahya - happy or joyful), or Peter (instead of Petra - solid, like a rock), or Mary (instead of Mariam).

Non-Arabs do not have to give their children Arabic names.

What is required is to avoid names that are used only by the followers of other religions and which are usually used by the followers of those religions, such as George, Peter, John and so on. It is not permissible for Muslims to use these names, because that is imitating the Christians in the names that belong uniquely to them.

But if the non-Arabic name has a good meaning, there is nothing wrong with using it and giving it to one’s child. The Messengers and Prophets (peace be upon them) had good names and gave good names to their children, which they took from their customs and traditions, and they did not stick to Arabic names. Examples include Israa’eel (Israel), Ishaaq (Isaac), Moosa (Moses) and Haroon (Aaron).

3 – One should avoid ugly names or those that praise their owners. Al-Tabari (may Allaah have mercy on him) said, as quoted by Ibn Hajar in Fath al-Baari (10/577):

The reason why this is disliked is that when a person hears the name, he will think that it is describing the person named. Hence the Prophet (peace and blessings of Allaah be upon him) changed names to something which, if the person was called by it, was true.

Among the female names that the Prophet (peace and blessings of Allaah be upon him) disliked was the name ‘Aasiyah (meaning disobedient), which he changed to Jameelah (beautiful), as was narrated by Muslim (2139).

Other disliked named which are widespread in some Muslim countries are names which include the words al-Deen (or uddin/uddeen) and al-Islam, such as Noor al-Deen and ‘Imaad al-Deen or Noor al-Islam and so on. These names are disliked by the scholars for both males and females, because they suggest exaggerated praise of their owners.

That is because of the high status of these two words, al-Deen (the religion, the faith) and al-Islam. Forming names that include these words implies a false claim that is almost a lie.

Hence some of the scholars stated that they are haraam, but the majority are of the view that they are makrooh, because some of them suggest meanings that are incorrect and cannot be applied to a person. Initially they were titles that were added to names, then they started to be used as names. End quote. Tasmiyat al-Wulood (p. 22).

4 – With regard to female names, it is essential to avoid names that carry meanings that provoke desire, such as Fitnah or Faatin (meaning tempting) or Naahid or Naahidah (which means one whose breasts are prominent).

It is also essential to avoid giving females the names of angels, because that is an imitation of the mushrikeen who thought that the angels were the daughters of Allaah.

With regard to giving girls the names of angels, it seems that this is haraam, because it is an imitation of the mushrikeen who regarded the angels as daughters of Allaah, exalted be Allaah above what they say. Similar to this – i.e., in that it is haraam – is calling a girl Malaak or Malakah (meaning angel). End quote from Tasmiyat al-Mawlood (p. 24).

GOOD NEWS – We Just Added A Lot More NAMES
A master list for all boys and girls Names
(and a big link just below that): 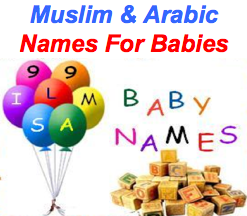