Is it FARDH? Or Sunnah?

ISLAM NEWSROOM - "Sunnah or Fardh - It's Not What You Think"

Whenever we promise Allah we will do something, if He relieves our situation, we must keep our promise to Him.
If we promise to do (so-and-so) and then He makes things work out for us, we must be to keep our end of the promise to Allah.
Here's a letter similar to one we answered very long ago concerning the difference between "Fardh" and "Sunnah".

Confused over the beard - Is it Fardh or just Sunnah? 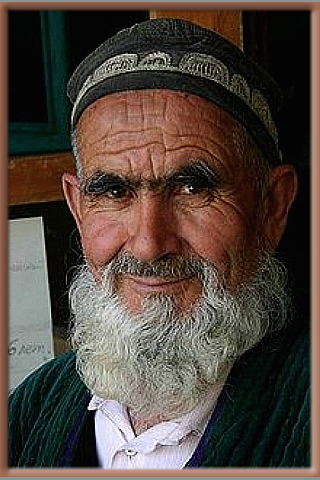 Full Beard
(and nice smile too!)

As-Salaamu alaikum, I have a question about the beard.

According to my Islamic knowledge, growing the beard is a Sunna - But, Not a Fardh. I am sure you know the difference between Sunna & Fardh, right?

After all, a man might need to have his beard shaved off for any of the following reasons and there could be others too:

A. What if he has a serious skin problem - and it is further irritated by the facial hair?

B. What if a man's wife has a skin problem and it is irritated by his beard?

D. Or what if he just doesn't like the look of a beard?

After all, Allah doesn’t Judge us by our clothes or hair or anything in this world. Allah is only looking to our “taqwah” and “akhlaq” - right?

I would like to have your opinion on this? 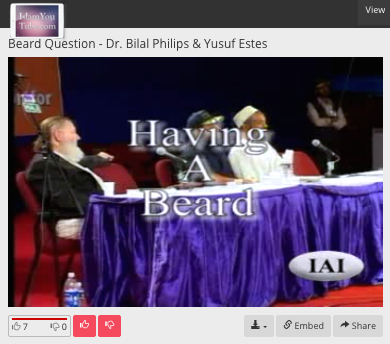 And thank you for your interesting letter to us. And “yes”, we do know something about the categories within the fiqh (understanding) of Islam.

As to the beard, our prophet, peace be upon him, was asked by his companions about this very same subject.

He replied to them:
"Leave it alone. Cut the hair above the lip" (moustache).
Sahih Bukhari [Volume 7, Hadith 780]

(Opposite of the Order of Prophet, peace be upon him)

Prophet, peace be upon him, and his companions followed this instruction, as do the followers of sunnah until this day. He did not like the big heavy moustache, and he disliked anyone to have heavy hair over their lip.

Your points about not allowing the beard to grow due to certain difficulties, are correct - but (READ):

A. If he has a serious skin problem - and it is further irritated by the facial hair, scholars would allow for the removal of hair in the affected areas.

Answer: Actually, anytime there is hardship or no way to complete something, Islam has provisions for this. Take for example the issue of eating pork when there is no other food of any kind and someone is starving to death.
It is also understood, when difficulties are so hard that someone cannot do something, then this would be acceptable until when the person is able to do it. When we can't stand for prayer, we can sit. When we can't sit, we can lie down. If someone is paralysized they can pray only with their eye movements.

B. If the man's wife has a skin problem and it is irritated by his beard, he should talk with the doctor to find the best solutions.

Answer: He should check with his doctor and find out why she is unable to be close to his hair. Beard hair is no different than hair on the head, back or anywhere else on the body. If she is truly having a problem, he could use the same thing over his beard, the doctor's use around their faces in surgery.

C. He might be unable to grow a beard. Some people in certain parts of the world are without facial hair all their lives, and for them there is no punsihment because this is out of their hands.

D. He might just prefer not to have a beard. After all, Allah doesn’t Judge us by our clothes or hair or anything in this world. Allah is only looking to our “taqwah” and “akhlaq” - right? Answer: When anyone is physically unable to do any of the requirements of Islam, regardless if it is Sunnah or Fardh, the rule is, the person is to do the thing prescribed by prophet Muhammad, peace be upon him, whenever a difficulty of this type should happen.

Answer: Our personal preferences are not a valid excuse. When something is made as a direct order, we should take it very seriously and do our best to perform it even if we might think it is not fardh.

The sunnah of our prophet does contain both obligatory and voluntary types of worship. However, we should be careful how we describe these with English words. Translation can get you into a lot of trouble if it is not done properly.

Consider a few ideas from common words we "mistranslate" every day:

"Leave it (alone), cut above the lip (moustache)"
[NOT LIKE ABOVE]
[Sahih Al Bukhari]

Do Muslim men have to grow the beard?
That’s funny. Why do you have eye brows? Allah put it there. Are you asking me- "Why don’t I shave it off?

Why don’t you shave your eyebrows?

If you’re going to say, "Well because everybody does it" - Well now that’s always a good reason to do something, isn’t it? If everybody else does it, that’s your excuse?

What do the majority of the people do on a Friday night?

They don’t come to religious lectures do they?

And most of them are going to have a hangover the next day because of it. The most of the people in the world today, the free world that I know about, get drunk, waste money, and act like fools on Friday and Saturday night. So is that an excuse that I go and do it too? Is it?

So when you cut your beard off, why did you do it? Why? Did Rasulullah (Peace and blessings be upon him) tell you to cut it? Or let it grow?

But a brother comes to me and he says, "Please make Du'a for me."

He said, "Shirk! How is it Shirk that you make Du’a for me to grow my beard?"

-- One brother said, "But yeah you know my wife said, she really likes me to shave it off and keep it smooth."

I said, "You got to wonder about a woman who wants her husband to look like another woman!"

(They never invited me back to that community again -- I wonder why?) LOL

Why do Muslims grow beards?
Is it mandatory in Islam?
Why not shave like a normal person?

Quick Answer: "Don't shave if you don't have to."

According to the teachings of Islam, we have to believe and follow the Word of Almighty God (Allah) in the Quran. The Quran orders us to obey the prophet Muhammad, peace be upon him, and he ordered us to leave our beards alone and let them grow. Whoever shaves his beard and is not forced to do it, should pay careful attention to what Islam teaches on the subject. [details below]

NOTE FOR BELIEVERS: This is not a matter of how we want to "interpret" whatever the Quran teaches us. Nor are translations acceptable as difinitive answers.
Please keep in mind we do possess the original Quran (recitation) in the hearts and minds of over 1 billion people.
Over 9 million of us have memorized the entire Quran from cover to cover in the original Arabic language, jot for jot and dot for dot.
Islam has the original and only version of the Last Testament.

The Quran is most clear in the Arabic language.

Allah teaches us in Quran - we must obey His prophet Muhammad, peace be upon him. Quran states:

"But no, by your Lord, they can have no faith until they make you (Muhammad) judge in matters wherein they dispute, and come away without any resistance in their hearts against your decisions, and accept with full submission."
[Surah An-Nisaa Chapter 4, Verse 65]

Many verses tell us to "Obey Allah and His Messenger".

While still others tell us:

"Whoever has obeyed the messenger, has obeyed Allah." And in one verse Allah tells Muhammad, peace be upon him, to "Say, 'If you truly love Allah then follow me. Then Allah will love you and He will forgive your sins, for He is the Forgiver, the Merciful.'"
[Surah Al Imran 3:31]

Now let us look to the teachings, sayings and traditions of our prophet, Muhammad, peace be upon him, in the most noted of all collections of hadeeths (narrations from the prophet), called "Sahih Al Bukhari":

Vol 7, Book 72. Dress: Hadith 780.
Narrated By Nafi': Ibn Umar said, The Prophet said, "Do the opposite of what the pagans do. Keep the BEARDS and cut the moustaches short.'

"There will emerge from the East some people who will recite the Qur'an but it will not exceed their throats, and who will go out of the religion as an arrow passes through the game, and they will never come back to it unless the arrow, comes back to the middle of the brow (by itself) (i.e., impossible).
The people asked, "What will their signs be?" He said:

Allah is the All-Knower.