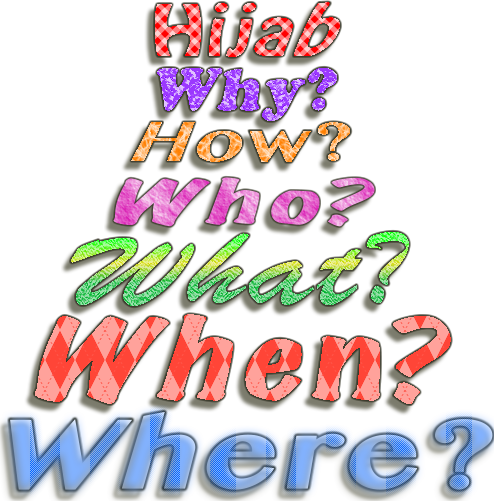 "Why do Muslim women have to cover their heads?"

This question is one which is asked by Muslim and non-Muslim alike. For many women it is the truest test of being a Muslim.

Simple Answer: Believing women cover themselves - the way God has decreed - Because God Declared It..
Because GOD HAS DECREED!

"O My prophet, tell your wives and daughters and believing women to cover up themselves with outer clothing all around them (when out in public or around men who are not close relatives). This is best for them so they are known (as believing women) and to be annoyed.."
(Surah Al-Ahsab, 33:59)

After a Commandment of God, what else is necessary to know?

Nothing really. However, we would like to expound on a few common sense reasons to achieve modesty for both the women and the men, as follows:

Consider the status of people when they are valued for their intelligence, abilities and skills - instead of appearance, attractiveness and sexuality.

How? How do women feel about the treatment of men?

A Muslim school girl once said, "We want men to stop treating us as objects for sex, as they have always done. We want them to look past appearance and pay attention to our personalities and our minds. We want to be taken seriously and treated as equals, not just chase after us for our bodies and physical attraction."

What? What do most people think of women covering?

Any women woman who covers her head with a scarve or veil is making a statement about herself. When a woman covers herself from head to toe like a nun from the Catholic Church or a Jewish woman who follows the Torah, or as Muslim woman with hijab - she is immediately identified and considered as a "religious" or "God-fearing" woman.

Anyone seeing her knows she is a woman of good, moral character. Women who cover themselves feel the dignity and self esteem - pleased to be considered as believing women.

What do Muslim want by covering themselves?

Muslim women want to be known as modest, pure and chaste women - not objects of sexual attraction even in the slightest. She conceals her sexuality for her husband in private, while exhibiting true feminity out in the open.

Some scholarly folks will not consider this an open discussion and might even require a woman's face to be covered along with her hair as well.. The vast majority hold the belief this is not required, while some of them consider face covering at least as extra reward.

Some hold the belief that exact details are not quite clear and therefore, left open to individual's discretion accroding to their particular circumstance.

Where any women specifically ordered to cover their faces?

The Prophet's (peace be upon him), wives were definitely ordered to cover their faces, so no men would see them and think of them in any way of sexual desire - because these women have been designated by Islam as "Mothers of the believers". Certainly no sane person would want to think of their mother in any such manner. This was not the case of other women, so it is likely the face cover for others is not an order and only an option according to a lady's desire.

What does the word "hijab" mean?

Hijab comes from "hajaba" meaning: (to hide, put out of view, conceal). Now adays the reference to "hijab" is: (modest cover up for Muslim women).

What is to be covered?

Allah Almighty explains in the Quran:

These verses from the Quran contain two main injunctions:

A woman should not show her beauty or adornments except what appears by uncontrolled factors such as the wind blowing her clothes, and the head covers should be drawn so as to cover the hair, the neck and the bosom.

Are there fixed standards for dress?

Islam has no fixed standard as to the style of dress or type of clothing that Muslims must wear. However, some requirements must be met.

The first of these requirements is the parts of the body which must be covered. Islam has two sources for guidance and rulings: first, the Quran, the revealed word of Allah and secondly, the Hadith or the traditions of the Prophet Muhammad (peace and blessings be upon him) who was chosen by Allah to be the role model for mankind. The following is a Tradition of the Prophet:

"Ayshah (the wife of the prophet, peace be upon him) reported that Asma', the daughter of Abu Bakr came to the Messenger of Allah (peace and blessings be upon him) while wearing thin clothing.
He approached her and said: 'O Asma'! When a girl reaches the menstrual age, it is not properthat anything should remain exposed except this and this. He pointed to theface and hands."
[Abu Dawud]

Is there another requirement?

The second requirement is looseness. The clothing must be loose enough so as not to describe the shape of the woman's body. One desirable way to hide the shape of the body is to wear a cloak over other clothes.

However, if the clothing is loose enough, an outer garment is not necessary. Thickness is the third requirement. The clothing must be thick enough so as not to show the color of the skin it covers or the shape of the body. The Prophet Muhammad (peace and blessings be upon him) stated that in later generations of his Ummah there would be

"women who would be dressed but naked and on top of their heads (what looks like) camel humps. Curse them for they are truly cursed."
[Muslim]

Women must not dress so as to appear as men.

What are some limits of dress for Muslim women?

Women should not dress in a way similar to the unbelievers.

What about "modern" dress for Muslim women?

Often forgotten is the fact that modern Western dress is a new invention. Looking at the clothing of women as recently as seventy years ago, we see clothing similar to Hijab.

These active and hard-working women of the West were not inhibited by their clothing which consisted of long, full dresses and various types of head covering.

How? - How do Muslim women feel about all the hassels and bother of covering?

Muslim women who wear Hijab do not find it impractical or interfering with their activities in all levels and walks of life.

Hijab is not merely a covering dress but more importantly, it is behavior, manners, speech and appearance in public.

Dress is only one facet of the total being.

The basic requirement of the Muslim woman's dress apply to the Muslim man's clothing with the difference being mainly in degree.

What? - What must be covered for all Muslims all the time?

Modesty requires that the area between the navel and the knee be covered in front of all people except the wife.

What? - What other limits are there on dress code?

The clothing of men should not be like the dress of women, nor should it be tight or provocative. A Muslim should dress to show his identity as a Muslim. Men are not allowed to wear gold or silk. However, both gold and silk are allowed for women.

What? - What is the over all benefit of covering?

For both men and women, clothing requirements are not meant to be a restriction but rather a way in which society will function in a proper, Islamic manner.