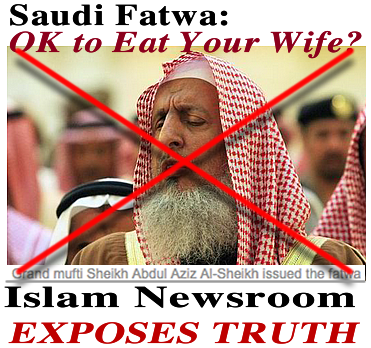 "Allows Husbands to EAT Wives if They're Very Hungry"

ISLAM NEWSROOM REPORTS: The top religious scholar and mufti for Saudi Arabi, clearly denies the reports alleging he issued a fatwa telling husbands they can eat their wives if they are hungry enough. -- This should not even be a question! 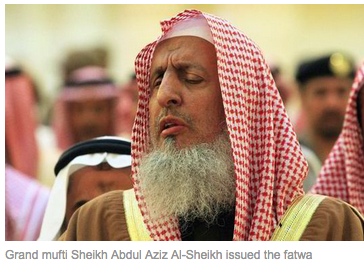 Quote from Yusuf Estes (our senior consultant): "Sheikh Abdulaziz Al Sheikh (the Grand Mufti of Saudi Arabia), whom I do know personally, is to be trusted in what he says about Islam's teachings - and what he says about these liars are saying to make fitnah for Muslims everywhere."

Here's what is reported that Sheikh Al-Sheikh says about this false accusation:

Watch LIVE Tonight & Call In on www.GuideUS.TV/live Call-In Show
You can also leave your comments here on Islam Newsroom (bottom of page) 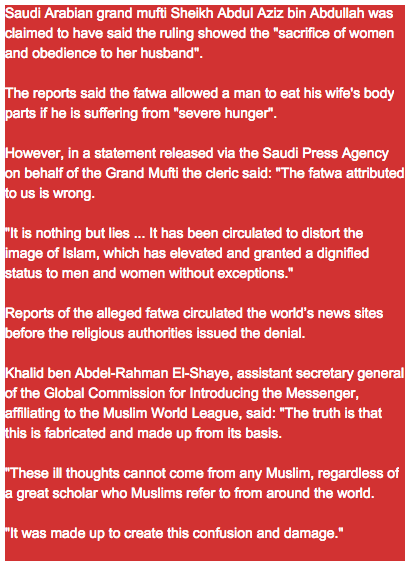 Saudi Arabian grand mufti Sheikh Abdul Aziz bin Abdullah was claimed to have said the ruling showed the "sacrifice of women and obedience to her husband".

The reports said the fatwa allowed a man to eat his wife's body parts if he is suffering from "severe hunger".

However, in a statement released via the Saudi Press Agency on behalf of the Grand Mufti the cleric said: "The fatwa attributed to us is wrong.

"It is nothing but lies ... It has been circulated to distort the image of Islam, which has elevated and granted a dignified status to men and women without exceptions."

Reports of the alleged fatwa circulated the world’s news sites before the religious authorities issued the denial.

"The truth is that this is fabricated and made up from its basis. These ill thoughts cannot come from any Muslim, regardless of a great scholar who Muslims refer to from around the world."

"It was made up to create this confusion and damage."

Do you think these people are done?
(NOT YET - Take a look at these stories):